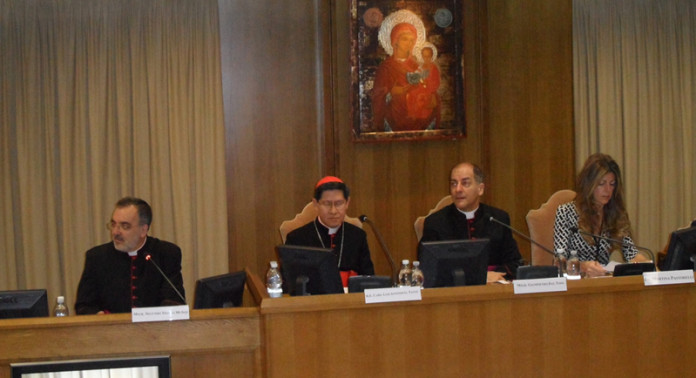 Prof. Gabriel Witaszek at the International Congress organized by Cor Unum in the Vatican

To commemorate the 10 years of the Encyclical Deus Caritas Est by the Pontifical Council Cor Unum on the 25th and 26th of February.  The theme of the Congress was “‘Love will never end’ (1 Corinthians 13, 8). This was also part of the events planned for the year of Mercy.

His Em. Card. Gerhard Ludwig Müller, Prefect of the Congregation for the Doctrine of the Faith, examined the theological and pastoral perspectives of the Encyclical for the world today.  His Em. Card. Luis Antonio G. Tagle, focused on the importance of Deus caritas est, as the call of the Church to respond with love.

Polish Redemptorist father Witaszek Gabriel, professor of the Alphonsian Academy (Rome), was invited by the Council.

Rabbi David Shlomo Rosen, Director of the Department of Religious Affairs of the American Jewish Committee in Jerusalem, made a very interesting speech on the meaning of Love in the three monotheistic religions.  Prof. Saeed Ahmed Khan, professor at Wayne State University in Detroit (United States), and the philosopher Fabrice Hadjadj, Director of the Institute philanthropos of Fribourg (Switzerland) were in others on the panel of speakers. The others on the panel were Michel Thio, President of the International Confederation of San Vincenzo de Paoli,  Marina Almeida Costa, Director of Cabo Verde Caritas, Roy Moussalli, Executive Director of the Syrian Society for Social Development, Alejandro Marius, President of the Asociación Civil Trabajo y persona (Venezuela), and Eduardo M. Almeida, representative in Paraguay of the Inter-American Development Bank.

There was a Papal audience at the closing of the conference.  There was wide representation from the representatives of the Episcopal Conferences and many international Catholic charitable organizations.