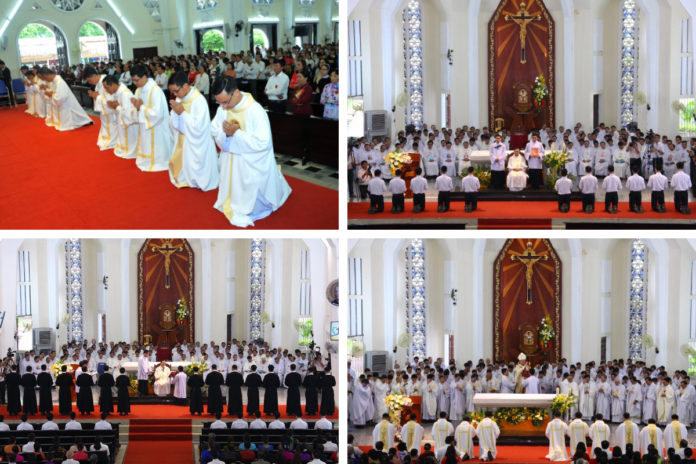 (Sai-Gon, Vietnam) It was a great day for the Redemptorists in Vietnam as 11 novices professed their first vows and 15 brothers made their final profession Tuesday 30th of June 2020, at the shrine of OMPH Sai-Gon.

The mass was presided over by Rev. Joseph Nguyen Ngoc Bich, the provincial superior and concelebrated by more than 100 priests. There were many religious brothers and sisters, the families, relatives, and friends of candidates attended to pray for them and wish them the best for the future.

Yet another important day for the Redemptorists in Vietnam that as many as 5 deacons were ordained to the priesthood and 6 were ordained as deacons on Wednesday the first of July, by most Rev. Joseph Dang Duc Ngan, Bishop of Da Nang, at the shrine of OMPH Sai-Gon.

In his homily, Bishop Joseph addressed the candidates saying: “Following closely the footsteps of Jesus and the spirituality of Saint Alphonsus, you are called to serve the poor, especially to the most abandoned.” He also emphasized the importance of prayers in the missionary life.

At the end of the mass, Rev. Dominic Nguyen Duc Thong, the vicar provincial superior, thanked the Most Rev. Joseph and all those who attended the Holy Mass. He too asked everyone to pray for those newly ordained Redemptorists to be faithful to serve God and His Church, in a wounded society of VIET-NAM.

After two days of God’s blessings, the province received a lot of blessings and new energy to continue the mission of Christ.

Redemptorists have 25 communities and serving 18 dioceses out of 26 dioceses of VIET-NAM. There are 362 professed members with 241 priests, 6 deacons, 19 religious brothers, 45 final professed brothers, 51 temporary professed. 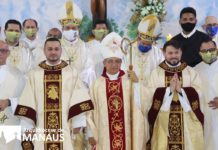 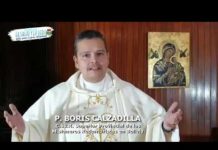 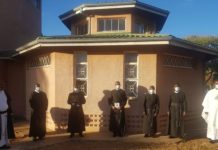