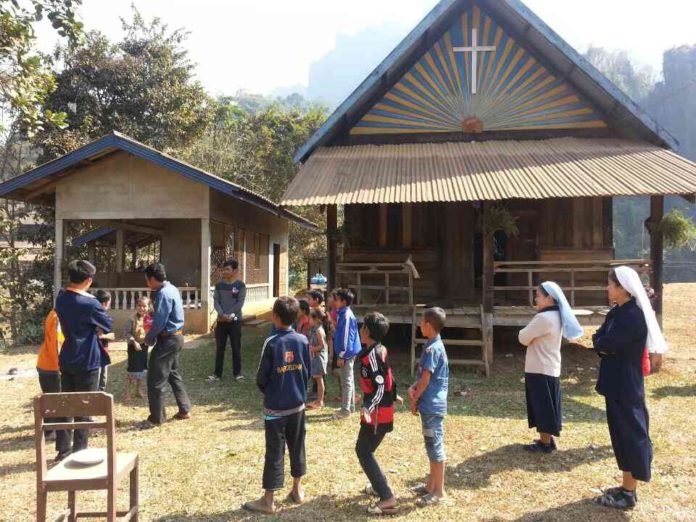 THAKHEK, Laos — The only two foreign Redemptorist priests in Communist Laos believe that their mission is not only to plant but nurture the seed of faith with hope that it will continue to grow in the future.

Redemptorist Fathers Peter Thienchai Getsurin from Thailand and Joseph Toan from Vietnam have been involved in pastoral care in Lao villages and with ethnic Vietnamese living in this Laos’ central city of Thakhek, on the shore of Mekhong River that marks the border between Thailand and Laos. They also work as chaplains for Lovers of the Holy Cross sisters as well as formators in the seminary. However, their main apostolate is to run a formation house for Redemptorist seminarians.

“Our house’s name is Mary House in Laos,” said Father Thienchai. The Redemptorists from Thailand began mission in Laos in 2008. Father Phaiboon Udomdej went to Laos first and soon after Father Wiboon Limpanawu joined him, staying at first at the local seminary in Thakhek. The Thai Redemptorists from Bangkok province are attached to their main community in Khon Kaen, Thailand. In the beginning they had four young adults as seminarians.

In 2014 the Mary House in Laos has 14 high school students, three pre-major seminarians and two Redemptorist Vietnamese students who are in “immersion” year, Father Thienchai said. The 14 students bike to Lao government-run school, about 5 kilometers from the Mary House. They return for lunch and then back for afternoon classes.

Father Thienchai said he was assigned to this mission in 2011. He said the mission in Thakhek “is not too difficult because the Lao government is not strict” like the other three vicariates. Laos, a landlocked country, with a population of about six million people, has four apostolic vicariates (Vientiane, Luang Prabang, Savannakhet and Pakse). It has about 45,000 Catholics, a majority of them are ethnic Vietnamese. Thakhek is in Savannakhet vicariate. 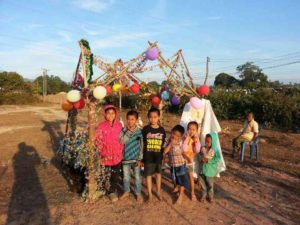 Father Thienchai gave an example of the less restrictive government policy in where he works. “When I have Sunday Mass in a village I do not have to ask permission from the government for religious activities,” but church people in other vicariates have to ask for government approval for such activities. He added that occasionally government officials would go along with the priests to villages.

In the past Laos has always been on the World Watch List of countries where Christians are persecuted. In 2014 Laos ranks 21 in the severe persecution list. The NGO Christian Solidarity Worldwide reported that during 2012-2014 there were many cases in Savannakhet province where Christians were subjected to threats, evictions, arrests, disruption of meetings and religious services, forced participation in animist ceremonies.

Father Thienchai said he can carry out religious activities without difficulties. “My ministry is to assist Bishop Prida Inthirath of Savannakhet, which includes saying Sunday Mass in many villages, saying Sunday and weekday Masses for Lovers of the Holy Cross sisters on Sunday, giving conferences to the Lovers of the Holy Cross novices, and assisting in the pre-major seminary program for the vicariate. Father Toan works with the major seminary formation as well as providing pastoral care for Vietnamese Catholics. 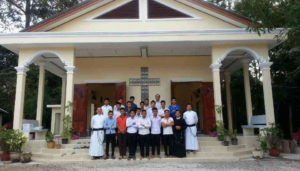 The Thai missionary said, “The Redemptorist mission in Laos is to nurture the seed of the Catholic faith for the future. As we are under a communist government we are not able to grow as much as we can due to the situation in the country. Formation is the main priority of the Redemptorist mission. In addition, pastoral work for the people of faith is also needed.”

He concluded that “Standing in solidarity in the face of difficulty with Lao Catholics is the root of Redemptorist Mission. While doing so, I have learned a lot about how to keep religious faith alive in a communist government.” 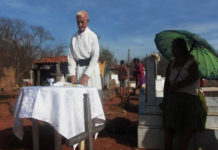 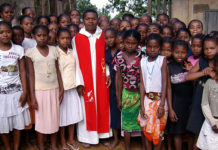 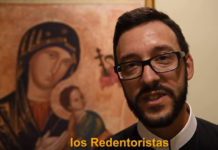