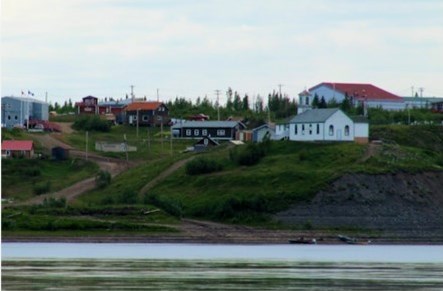 Canada: Greetings to you from Inuvik, Northwest Territories, home of the newest mission of the Redemptorists in Canada and the most northerly mission of the Redemptorists in the world. The Land of the midnight sun, gateway to the Beaufort Delta and western Canadian Arctic, this mission territory was pioneered and nurtured by the priests and brothers of the Oblates of Mary Immaculate, the Sisters of Charity of Montreal (Grey Nuns) and most recently tended by missionary priests, brothers and sisters from across Canada and around the world. We have stepped into big shoes, but it is good that we are here.

Fr. Jon Hansen, C.Ss.R. arrived here on August 7 after a two day diocesan orientation in Yellowknife, NT and a 3 day marathon journey from Yellowknife to Inuvik. Though long, the drive through the Yukon Territory and the 700 km final leg up the Dempster highway is one of the most beautiful trips you could imagine. The view of majestic mountain ranges andpristine rivers coursing along the side of the road for miles on end made the miles go by quickly.

Inuvik is the commercial and government center of the communities in the Beaufort Delta. It is a town of about 3500 people and is a mixed community of Inuvialuit, Gwitchin and people from the south of Canada and around the world. The parish in Inuvik is called Our Lady of Victory but the church is most often referred to as the “Igloo Church” according to its architectural similarity with the traditional winter shelter of the northern nomadic peoples.

From the parish in Inuvik the Redemptorists serve 3 other missions; Tsiigehtchic, Tuktoyaktuk and Paulatuk.

Our Lady of Lourdes Church and Historical Oblate Mission House

Tsiigehtchic sits high on a prominent bluff overlooking the confluence of the Arctic Red River with the mighty Mackenzie. It is a Gwitchin community, the home of fishermen and fur trappers as well as teachers and government workers. There are very few services here; the nearest police detachment is an hour away and the nurse only comes in once a week. Connection to the highway relies on a short ferry ride or the use of the ice road across the river once winter arrives which is usually in early October. The Church here, “Holy Name of Mary”, is served by Grace and Olive Blake. Grace presides at Sunday service when the priest is not around and Olive loves to clean and prepare the church. They steadfastly maintain a presence in the community offering their prayers. In Grace’s words, “not too many attend Church anymore but it is important that we pray and lift up the community”. They are excited that in October a missionary family from northern BC will be coming to stay in the rectory for a year. “Hopefully”, says Grace, “it will bring some of the young people back to the Church”.

Tuktoyaktuk is an Inuvialuit community located on a peninsula jutting into the Beaufort Sea. A local geological curiosity is the pingos which are visible on the horizon jutting up from the otherwise flat barren lands. Pingos are formed when liquid water is trapped in permafrost and, over the course of many freeze and thaw cycles, begins to push the land up into an enormous mound of ice and soil towering in some case more than 70 meters above its surroundings. “Barren” describes the land’s lack of trees but it does not do justice to the beauty that is present here. As one flies into the community your senses are overwhelmed as the sun sparkles off the thousands of tiny lakes glistening like diamonds highlighting a mossy green and crimson canvas. Sr. Fay Trombley has been serving the church in Tuk for the past 10 years along with local elders Jean Gruben and Dorothy Lorreen. Together they foster the faith of the small Catholic community as well as serve the needs of the larger community through the St. Vincent de Paul outreach. Sr. Fay has been recognized and honored in the north as a “Wise Woman” an award she received in Yellowknife in 2010. She is a wonderful mentor, willing to share her wisdom generously with a novice missionary.

Paulatuk, also an Inuvialuit community, lies at the head of Darnley Bay on the Arctic coast 300km to the east of Inuvik. Marlene Wolki is the chaplain of the parish community of Our Lady of Lourdes and Sadie Lester president of the local conference of St. Vincent de Paul serving this primarily Catholic community of 1000 people. Services take place in a little Quonset Hut that was built next to the old Oblate mission house which still stands strong, even if a little weather beaten after many Arctic winters. While you can drive to Tsiigethchic all year round and Tuktoyaktuk in the winter on the ice road, Paultuk is accessible only by air or sea. The sense of isolation is palpable. To imagine the conditions the early missionaries must have endured, not to mention the people who have thrived on this land for 5000 years, is both daunting and inspiring.

What all of these communities share in common is the friendliness and welcoming attitude of the people. While there is a real sense of independence and self-reliance it does not hinder the desire for relationship and community building. Perhaps it even serves as a catalyst because even the most self-reliant person understands that they can’t do everything on their own. Some things take the work of a community.

There is also pain here. Social issues and addiction are evident. The legacy of the residential school system is a memory that is not very distant and although there is a deep spirituality among the people, resistance and a cautious attitude toward the Church is sometimes apparent.

So we will work slowly and patiently with care and compassion. Taking the time to first listen, learn and discern what the Spirit is asking us to do while we are in this magnificent land among these wonderful people.

If you would like to stay abreast of the exploits of the Redemptorists in northern Canada you can come to our new parish website at www.olvinuvik.com or see us on Facebook at www.facebook.com/olvinuvik. We do have a guest room in the rectory so, if the north is calling you, do drop us a line and arrange a visit, we can promise it will be an adventure to remember.