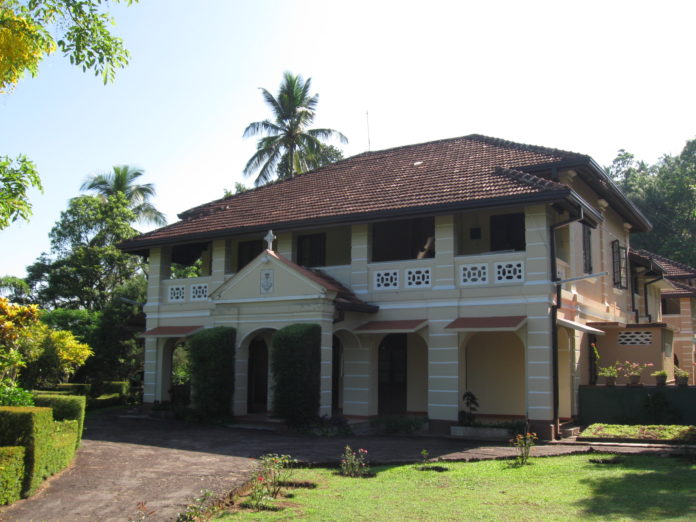 Historically-speaking, the first Redemptorist to land in Sri Lanka was Fr.Francis Menezes, a native of Goa, India, who had been formed in the Redemptorist way of life in Portugal and Italy. When there arose the well-known dispute between the Propaganda Fidei and the Padroado over the ecclesial jurisdiction in India and Ceylon (as Sri Lanka was known then), the Propaganda Fidei sent Fr.Menezes as their special emissary to Ceylon in 1843 to look into the matter. It appears as if he decided to stay behind in Ceylon for whatever reason, because there exist reliable historical records that sketch some of his apostolic work in southern Ceylon for a few years in the midst of very controversial circumstances. In any case, Fr.Francis Menezes will surely go down in history as the first Redemptorist to set his foot on our Sri Lankan soil.

Then, there is also evidence to the fact that from the beginning of the 20th century, the Australian Redemptorists also came to the island of Ceylon to explore new apostolic possibilities. Thus, Aussie Reds, Fr.P.Linch in 1906, Fr.Eddie Gallehen in 1922, Fr.Jack Brennen and team in 1936, and Fr.Johnny Moran and team in 1937 did arrive in Ceylon for Redemptorist work, especially for preaching popular missions in English. We have records of them preaching such missions in cities like Colombo, Kandy, Jaffna and Galle.

Then, the Irish Redemptorists arrived in Sri Lanka somewhat accidentally (or providentially?)  in the sense that a group of them who were on their way to the Philippines, landed at the Colombo harbour in 1938. Since they had more than a day to get back to the ship on their onward journey, they decided to make a trip to the hill-capital of Ceylon, Kandy. There, when they happened to pay a visit to the then Bishop of Kandy, Most Rev. Dr.Bernard Regno, OSB, a pleasant surprise awaited them. When the three visiting pioneers entered the saintly Bishop’s office, the latter welcomed them pointing his finger to a portrait that lay just behind his seat, saying “It was he who sent you here!”. It was a portrait of St.Alphonsus de Liguori whom Bishop Regno (being a pastoral-minded saintly Italian Benedictine from Naples) had taken as his pastoral model. Before the visitors could leave his office, the good Benedictine Bishop had already made sure to get an assurance from them that they would soon return to begin a foundation in Kandy.

Accordingly, the then Irish Redemptorist Provincial, Fr.Hugo Kerr sent three Irish Redemptorists to Ceylon who finally landed on the island on 5th January 1939, to establish a permanent foundation in the island. Their first foundation was in Kandy, at “Glen Helen” in Lewella. During their first seven years, the three early pioneers, Frs. Mathew Hickey, Leo O’Halloran and Gerald McDonald, did not have a permanent residence, as they had to shift their base to six different places (mainly due to the Malaria epidemic prevalent at that time), always in and around the city of Kandy. Finally, when they shifted to the seventh place (what was then known as the “Mount School”), at Anniewatta (namely, to the place where the present “Sancta Maria” is), on 15th March 1946, they at last got a permanent base in Sri Lanka.

The Importance of Kandy for the Sri Lankan Redemptorists

It is an undeniable historical fact, however, that once they had a good firm base in Bangalore, India, the Redemptorist pioneers did not have much time for consolidating their presence and work in Sri Lanka. Their eyes were firmly fixed towards the huge landscape of India and its vast population. In a sense, one is not wrong in saying that these pioneers used Sri Lanka as a sort of “a launching pad” for their rapid expansion in India. This is more than evident when it comes to the issue of recruitment of local vocations and their formation. Whereas the pioneers enthusiastically campaigned for vocations in India, a similar enthusiasm in Sri Lanka was lacking though the first local vocation of the entire sub-continent was, in fact, from Sri Lanka, in the form of a coadjutor brother, by the name of Bro.Alphonsus, from Ampitiya, Kandy. Whoever joined Redemptorists from Sri Lanka in the early three or four decades did so by chance. Similarly, a Juvenate (similar to a mionr seminary or a pre-novitiate) and a Studentate (Scholasticate) were started in India immediately after their arrival in Bangalore in the 1940’s. But there was no such formation house for Sri Lanka, and so, those who joined from Sri Lanka, had to go to India for their formation, a practice that continued till early 1990’s. In fact, the first Redemptorist formation house in Sri Lanka was their Pre-novitiate which was begun in Dodanwela, Kandy, in 1975, some 36 years after the arrival of the pioneers! The writer firmly believes this lack of interest in recruiting local vocations at the very origins and the lack of interest in having a formation house in Sri Lanka are two of the main reasons that should explain why in Sri Lanka the Redemptorists have never reached the number 20 at a given time, thus far.  Another important factor which we cannot ignore is the leaving of all the Irish Redemptorist pioneers from Sri Lanka as early as the 1960’s whereas the Irish presence in India is still there though steadily declining. The pioneer Redemptorist presence did ensure strong, stable and continuing religious infra-structures for Redemptorists in India while the same cannot be said about Sri Lanka.

Although their numbers have always been small, the Sri Lankan Redemptorists through their hard, dedicated apostolic work have always kept their name known all over Sri Lanka. Their popular parish missions, preaching at Church feast novenas and retreats (especially retreats to the religious and in schools) have been their main apostolates in the island for decades while parish work also has become one of their apostolates since 1964 when they accepted the then fairly undeveloped parish of St.Theresa’s, Timbirigasyaya, that is 25 years after their arrival in Kandy, to be historically precise. In other words, for all practical purposes, the Redemptorist presence in Sri Lanka for the first 25 years was exclusively in Kandy. That is to say that Kandy, especially, “Sancta Maria”, Kandy, necessarily has to feature in any historically meaningful celebration of the CSsR presence in Sri Lanka.

Incidentally, their chapel at “Sancta Maria” in Kandy is the first shrine dedicated to Our Mother of Perpetual Help (not only in Sri Lanka but also in the entire Indian sub-continent) where they began the popular novena devotion to the miraculous icon on 15th March 1946. Since then, this particular devotion to the Mother of Perpetual Help has spread all over Sri Lanka, thanks mainly to the Redemptorists who travelled to various parts of the island to preach the good news in the form of parish missions, Church feast novenas and retreats. Co-incidentally, this year, on 28th June, the novenites of “Sancta Maria” will be celebrating their 4000th novena which will be presided over by the Bishop of Kandy, His Lordship Rt.Rev.Dr. Vianney Fernando. The special triduum consisting of the three preparatory novenas on 25th, 26th and 27th June, will be presided over by their Lordships Bishops Raymond Wickremasinghe (Bishop of Galle), Norbert Andradi, OMI (Bishop of Anuradhapura) and Valence Mendis (Bishop of Chilaw), respectively, thus, giving a solemn tone to this special occasion.

Giving Thanks to God for the past 75 Years!

It is a well-known fact how our Founder was very keen on sending his missioners to far distant missionary territories, especially to China. It is in this sense that we could well imagine how happy he would have been to realise that his cherished dream had come true in Asia today at the beginning of the 21st century because the Congregation of the Most Holy Redeemer now has its members proclaiming the good news to the most abandoned in many Asian countries. It is in the same spirit that one can guess the Founder’s would-have-been-joy that in the little island that was known to him as “Zeylan” in Asia, is now celebrating the 75th year of the arrival of his sons there.

The Sri Lankan Redemptorists have had many ups and downs during their 75 years’ presence in this emerald and blessed island. The many and varied apostolic experiences of theirs have not only enriched them but they have also been used by God as His graced-channels to communicate to His people there that after all, God is merciful and goes after the lost sheep. That is to say that God has used the Redemptorists in Sri Lanka, as a whole, to further the proclamation of the good news revealed in His Son, Jesus Christ, the Redeemer, especially to those most abandoned by society and even by the Church. This is precisely why this year (2014), we, the Redemptorists in Sri Lanka, are so glad to remember with gratitude the last 75 years of our Redemptorist presence and our varied apostolates in Sri Lanka. God has been with us all along, in good times and bad times, ever since our first arrival in Kandy, 75 years ago, and He will surely continue to be with us as we look forward with renewed vigour to serve the people and the Church in Sri Lanka!