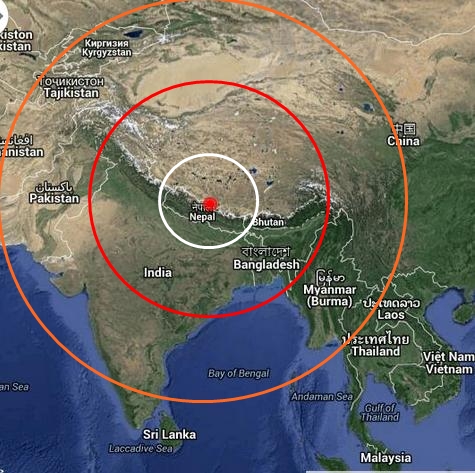 A requiem Mass for the earthquake victims was celebrated this morning (Monday 27 april) by the Vicar Apostolic of Nepal, Catholic Bishop Paul Simick: as reported to Fides, the Bishop prayed for the victims.

The small Nepalese Church also counts on international aid, given the tragedy that struck the country” notes Fr. Pius Perumana, director of Caritas Nepal, reporting the organization’s commitment after the violent earthquake of magnitude 7.9 that devastated Kathmandu on Saturday, April 25.

“The death toll continues to rise steadily”, he notes. “We have reached more than three thousand dead but considering the affected districts, we expect the number to reach six thousand people. Many bodies are still under the rubble and the army and civil protection teams are fully involved in the rescue operations. It is estimated there are already 5,000 injured and thousands are displaced and homeless”, said Fr. Pius.

“We visited the places affected. At the moment Caritas, which has already launched an international appeal, has been distributing aid to survivors, such as curtains food and water. Our job is also to encourage people”, notes the priest.

The Director of Caritas continues: “The estimates on victims and affected people are still uncertain since many remote areas affected by the earthquake, are not reachable. We are still in a state of emergency”, he says, adding, “I would like to highlight the fact that the earthquake occurred during the day and during a public holiday, where many people were outside: this avoided an even higher number of casualties”. However, according to UNICEF, there are already over 900 thousand Nepalese children who are in urgent need of humanitarian assistance.

Many Hindu temples and Buddhist monasteries have been damaged. In Kathmandu, a Protestant church collapsed, while 70 worshipers were inside. As reported to Fides, churches, schools and Catholic structures have suffered severe damage.