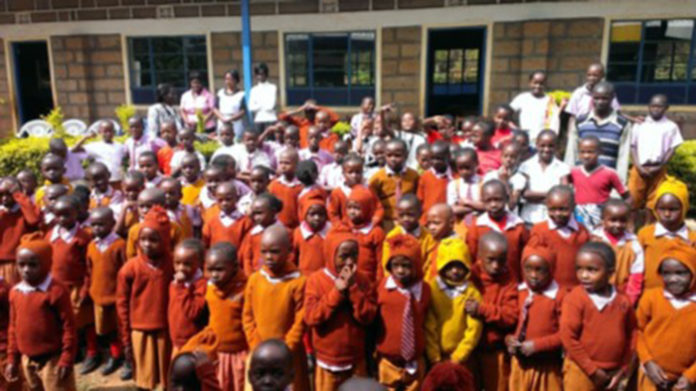 There’s an old saying, once you get the dust of Africa on your feet you will always return. I don’t know if it’s true for everyone, but it was for me. Having left Africa 25 years ago, I returned to the “dark continent” in July as part of an outreach project originating in St. Joseph’s parish in Grande Prairie, Canada.

The idea for the mission germinated in the heart of St. Joe’s parishioner Bernadette Thibeault. Bernadette has always had a love for the “little ones” of society, for those on the margins, for those in greatest need. Already she had been instrumental in organizing meals for disadvantaged people in our city and a few years ago had joined up with a Saskatchewan group making a mission trip to Ethiopia. That experience so moved Bernadette that she felt a call to take a group of her own to Africa.

Although collecting donations in money and in kind formed part of the overall plan, the main goal was really to establish an ongoing relationship with the Redemptorist mission in Kenya. That process was helped along significantly by a special connection in the person of Fr. Sarath Maddineni. As you might remember, Sarath is a Redemptorist from the Bangalore province who spent a year in our parish in Grande Prairie and then returned to his community in Kenya. Happily, Sarath would be our coordinator, guide and taxi driver during our stay. So, the stage was set for a real adventure!

The group was a mixed one, to say the least. Besides Bernadette, there were five recently-graduated high school students with three of their mothers, a teacher, a retired couple, a bookkeeper, and a priest (yours truly). We left Grande Prairie the afternoon of July 28 and only arrived in Nairobi at 6 o’clock in the morning of July 30. After having a bit of a rest, we did some banking and then met to map out our time in Kenya. We would be spending the first week volunteering in three places in Nairobi – the Missionaries of Charity (Mother Theresa’s sisters and brothers); Nyumbani Children’s Home for HIV+ orphans; and Cottalengo Home, also for HIV+ children.

Our first visit to the apostolates was certainly an eye-opener – and quite challenging for some. As they do in other parts of the world, Mother Theresa’s sisters and brothers care for those who are discarded by society, especially the disabled and mentally-ill. Based in the Kibera slums, these dedicated religious taught us to see the face of Christ in those that they care for.

The trip to the orphanages was also challenging. Seeing the smiles and joy in their faces, it was hard to believe that these children were battling a life-threatening disease. And if any of us picked up a child, it was hard to put him or her down. One little fellow in particular will haunt me for the rest of my life. The term “life-changing” would not be an exaggeration.

After one week we were ready for a change of scenery, so we drove 250 km in the direction of Mount Kenya to the village of Iruma, near the town of Meru. In Iruma the Redemptorists look after Holy Redeemer parish, as well as a school, St. Alphonsus. We arrived just in time for Sunday Mass, which was a lively celebration, to say the least – two hours of singing, dancing, clapping, and ululations were the order of the day. After lunch we had a chance to visit one of the out-stations not far away. St. Lawrence station is not much more than a shed with a corrugated ironroof but serves about 17 families in the area. They are hoping to build a more permanent structure in the near future.

The next day, we paid a visit to St. Alphonsus School. I first thought we would simply tour the grounds and maybe peek into one or two classrooms. But the school planned a special assembly in honour of their guests. Each class, from junior kindergarten to standard 6 presented a song or dance for us, culminating in an invitation to join them in dancing. Videos of me dancing do exist, but hopefully will be locked away in a vault somewhere until doomsday.

As we all know, all work and no play makes Jack a dull boy. So at the end of the trip we booked a two-day safari to see one of nature’s gems – the Masai Mara Game Reserve during the great migration of wildebeests and zebras. Being on safari was like being ten years old again. And while we never saw any leopards or rhinos, we still saw many other denizens of the African savanna – elephants, lions, giraffes, wildebeests, hartebeests, hyenas, waterbucks, zebras, impalas and gazelles, ostriches, vultures and numerous other birds.

As is often the case, saying good-bye was bittersweet. But our little group of missionaries returned to Grande Prairie with hearts full of joy and thanksgiving. It was truly a life-changing journey, where we saw the face of Christ in the faces of the many people we met. In the short time we were in Kenya, we made many friends and hope to deepen those friendships in the years to come. And so, we bid Kenya a fond farewell – “Kwaheri ya kuonana” – good-bye until we meet again.