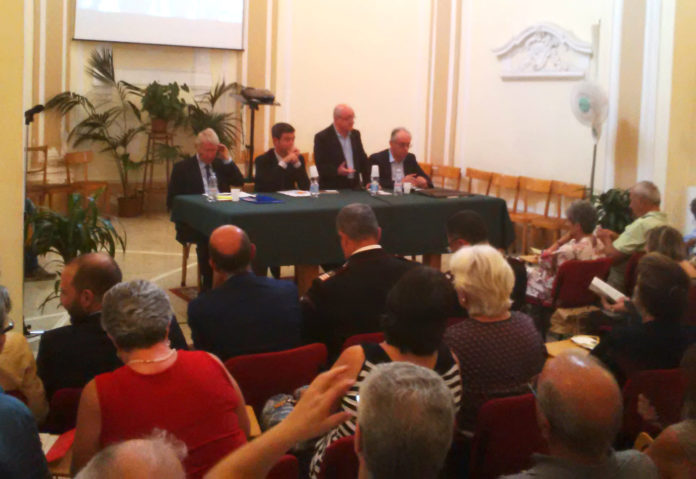 The “20th. Alphonsian Week” (Settimana Alfonsiana) was held in Palermo, Sicily, at a Redemptorist house, on September 22-28, 2014. It was organized by Father Nino Fasullo, CSSR, and his team. The theme of the congress was a text taken from the Gospel of Luke: “Do you think that I came to bring peace on earth? No, I tell you, but division “(Luke 12:51). It is a suggestive, provocative, interesting and attractive subject. It requires reflection, with a serious and open dialogue. The goal is to try to understand these words of Jesus, offer clues for interpretation, and to share the meaning of the proposal. The speakers are very committed persons and knew how to guide the reflections in a creative way.

The congress opened at the “Palazzo delle Aquile”, Palazzo Comunale. The mayor of Palermo, Leoluca Orlando, participated, greeted everyone and gave a talk on the contribution of Pope Paul VI, and his proposal of pastoral pedagogy, in the fight against the Mafia. – Among the speakers were well known personalities of the academic, cultural, theological, social and political world. The speakers were: Roberto Lagalla (Rector of the University of Palermo); Giancarlo Gaeta (biblical scholar at the University of Firenze); Salvatore Natoli (philosopher, University of Milano); Paolo Ricca (Theologian, Waldensian Church); Romano Penna (of the Lateran University, Rome); Remo Bodei (philosopher, University of Los Angeles, USA); Andrea Orlando (The Minister of Justice of Italy). Also, Franco Roberti (Ombudsman of the National Anti-Mafia Directorate); Giuseppe Pignatone (Chief Prosecutor of the Republic, Rome); Gianfranco Perriera (Director of Theatre); Salvatore Ferlita; Giuseppe Cantarano; Evelina Santangelo and others.

On opening evening, Father Michael Brehl, Superior General of the Redemptorists, offered an excellent reflection insisting on the importance of making a clear distinction: “Communion” should not be confused with “complicity”. When some powerful people wanted to destroy Jesus because of his message, they joined together. They had a purpose. That was “complicity”. But true “communion” can only be born of justice and truth-seeking. The words of Jesus – said Father General – remind us that “peace” is not cheap. It has a high cost. “Peace” is not only the absence of conflict, hostility, violence or homicide. Sometimes even in the name of “tolerance” or in the name of “God” “peace” is blurred. That can cause more injustice, exclusion, inequality and violence. The omission and the lack of courage to make decisions and act do not necessarily produce “peace”. Authentic peace, to which Jesus refers, comes only after much suffering. It is a consequence. Only after passing through the cross, where Jesus died as a consequence of his message, there is the possibility of a new life, a true reconciliation and justice. Only an unconditional love, willing to give his life for the good of others, can bring peace. Today we need a “prophetic radicalism”, like the one Jesus had, or St. Alphonsus Liguori and other followers of Christ. Pope Francis himself shows great courage in his words, gestures, decisions, guidance and actions. This type of “prophetic radicalism” can build a peace, firmly grounded on justice and solidarity, while requiring some division and personal suffering.

What is the “Alphonsian Week” (Settimana Alfonsiana)?

In Palermo, the “Alphonsian Week” is now 20 years old. It is a congress, a series of talks during five evenings, from 5:00 to 8:00 p.m., with three or four daily lectures. At the end of the day, there is time for questions, comments and dialogue. It has great prestige in the city and there is a very good turnout of people. A particular Biblical text is chosen every year and it is proposed to all the Lecturers. That same text, given to all, is the starting point of the reflection. Each speaker presents his own reflections and commentaries on the theme, from his own perspective. There is much diversity and variety. This enriches the reflection, provides a wider vision and promotes dialogue. You listen to different talks, from many diverse points of view: theology, philosophy, social sciences, literature, science, politics, law, etc. – There are also speakers who come from other religious experiences and traditions, as well as agnostics and unbelievers. The Bible is indeed inspired word, the “Word of God”. But it is also an extraordinary cultural resource of wisdom. It is a spiritual path that builds human consciousness and forms the conscience.

The person of Jesus convokes and challenges everyone. These reflections enrich our human experience. Jesus shows the unconditional love of God and the dignity of the human person. He promotes justice and peace; the search for truth; mercy to the weak, the neglected and the excluded. We are invited to encounter Jesus (Son of God, Son of Man, Prophet, Messiah, and Redeemer). Jesus is presented as a “sign of contradiction”. His message invites us to take a stand, to affirm the fundamental option, inner freedom, and personal responsibility. His “radicalism” is intense, passionate and urgent, but it also has an eschatological perspective. He invites us to discern in order to separate and distinguish what is right from what is wrong. This makes us free to confront any form of manipulation and enslavement, but also to be critical of the various forms of self-protective aggregations or closed and self-referential institutions.

The program of the congress offers three musical concerts: On Saturday September 20, at the Church of San Mamiliano, the “ORCHESTRA E CORO QUATTROCANTI”, under the direction of Pietro Marchese, performed a magnificent concert. On Saturday the 27th, at the “Conservatorio V. Bellini”, we listened to the “TRIO DI PERCUSSIONI ACCADEMIA XXI”. On Sunday the 28th, in the Oratory of Santa Cita, the “ORCHESTRA DELIGUORIANA” will offer a concert. These were great evenings of music and spiritual inspiration. St. Alphonsus Liguori is still very important. He motivates, inspires and invites us to encounter Jesus, his message and redemption. For believers and non-believers, the person of Jesus continues to be a mystery. It remains puzzling, but at the same time amazing and very attractive. Jesus attracts everyone and his death on the cross continues to elicit a response of love.