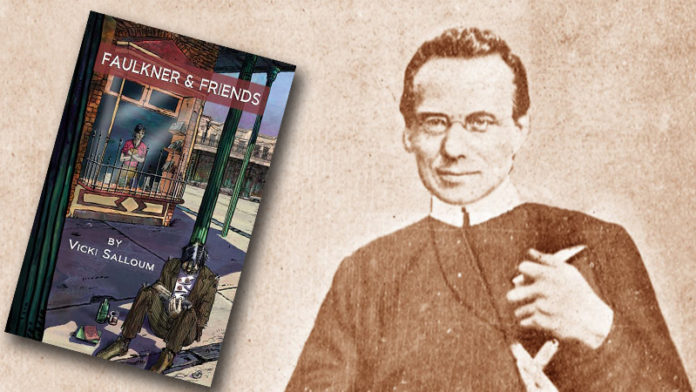 When New Orleans author, Vicki Salloum, was recently asked by an interviewer, “Tell us one place you want to visit, or person you want to meet, and why,” she responded with an actual occurrence in 1867: “Father Seelos was so beloved in the German and Irish communities of New Orleans that mourners, finding out that he was dying, flocked to the church in the middle of the night to hold vigil. And then a great storm blanketed the city and the mourners, unable to go home, stayed the night at St. Mary’s and more mourners arrived the next morning to weep and wail and pray and touch their rosaries and prayer books to the body of the priest whom many thought as ‘the Saint of New Orleans.’ I would love to have been there in that church to witness that scene, to have been part of the great celebration of his life. Even today, many people believe in the miraculous power of Father Seelos to cure the seriously ill.”

Salloum points out that her forthcoming second novel, Faulkner & Friends, is not a religious book buta spiritual one, “filled with characters who, in their suffering, cling to their mystical beliefs as a way of keeping their hope alive that their lives will get better.” One of the characters is a homeless elderly woman named Zella Theophile, who believes in the miraculous power of Seelos’ intercession to heal her wounded friend, Annie: “Father Seelos had a way with her. His eyes were almost jolly, as if someone told a joke he fully admired, the corners of his mouth turning up to meet the eyes. But there was more to his face that offered consolation: the genuine holiness. How to explain? Annie looked at the statue and knew that she couldn’t. Except that the eyes stared back without a trace of judgment, their light bringing peace and friendship and trust. He was handsome as well: the high cheekbones, shapely lips, delicate features, wavy hair. The glasses were what got her – similar to Leo’s – and it was that combination of glasses and the intense awareness in the eyes that radiated intelligence; more than that, an uncommon wisdom, and it was the totality of everything that brought a lifting of the heart.”

Faulkner & Friends is scheduled for release in September by a Los Angeles publisher. With the novel’s setting in the Irish Channel of New Orleans, and with Seelos featured so prominently, the Seelos Welcome Center is a fitting location to begin the author’s promotional reading and signing tour.