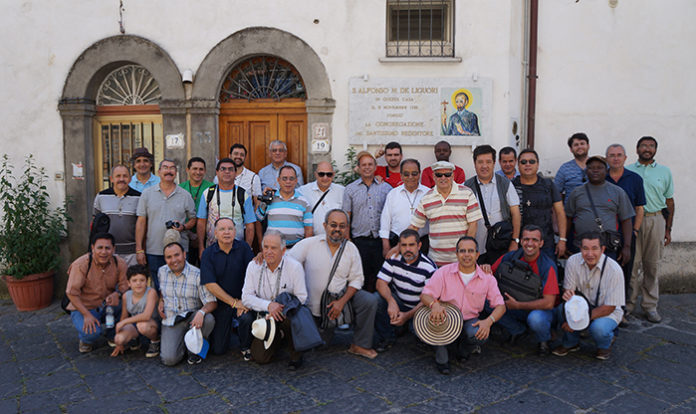 The Superior General, Fr Michael Brehl also greeted and addressed the participants. A brief presence of those responsible for the Office of Communications of CSSR, Frs. Rafael Vieira and Biju Madathikunnel, was also appreciated.

This year the program was organized for the first three days in Rome, as guests of the Community of St. Alphonsus, and the remaining time divided between Materdomini and Ciorani. From here, they made the pilgrimages to other historical places of the Congregation, such as Scala, Pagani , Marianella, Naples, Muro Lucano, Deliceto, etc. Even a visit to the places of importance to the Redemptorists, in Rome, helped to achieve one of the specific objectives of the course. This can be summed up in two verbs: to study and to see.

A visit to the monasteries of Redemptoristine nuns at St. Agatha  and Scala, as well as the hospitality of the confreres (a special mention must be made of the Pagani community) have proved once again not only a joyous time, but also an integral part of and witness to the “lived spirituality. ” Listening to music and singing performed by Paolo Saturno and his ensemble “Alfaterna” was another significant moment of the program.

On the other hand, much of the time was devoted to discussion of important issues of Redemptorist spirituality: the story of our origins, the process of the rules, the role played by our first houses, the personalities of our saints and blessed, language and keys in the readings of our Constitutions and Statutes etc.. Although the program was quite intense, the interest of the participants has been very high, expressed through a number of questions and responses, but above all with the desire to live fully the Redemptorist charism in response to the challenges of our time.

The fact that the time for discussion of all these issues was seen as too little, was a good sign. Maybe we should lengthen these courses. But we have to consider the economic problem, and also the fact that at some point someone starts to feel a bit ‘of “saudade” (nostalgia for their country)!