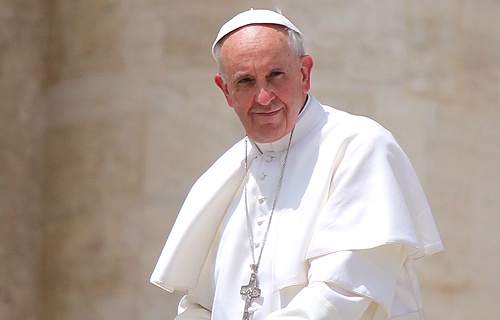 Pope Francis prayed the Angelus with pilgrims and tourists gathered in St Peter’s Square beneath the window of the Papal apartments in the Apostolic Palace at the Vatican on Sunday. In remarks ahead of the traditional prayer of Marian devotion, the Holy Father offered some reflections on the Gospel reading of the day, which was taken from Gospel according to St. Matthew (22:34-40).

“Today’s Gospel reminds us that the whole law of God is summed up in love for God and neighbor,” said Pope Francis, adding, “You cannot love God without loving our neighbor and you cannot love your neighbor without loving God,” and explaining that the “novelty” of Christ’s teaching consists in the union of the two commandments. Pope Francis also recommended the reflection of his predecessor, Benedict XVI. on the teaching, which is found in paragraphs 16-18 of his first Encyclical letter, Deus caritas est.

Pope Francis went on to say, “Jesus completes the law of the covenant, which He unites in himself, in his flesh, divinity and humanity, in a single mystery of love,” and, “In the light of the word of Jesus, love is the measure of faith, and faith is the soul of love: we cannot separate the religious life – the life of piety – from that of service to our brothers and sisters – to those flesh-and-blood brothers and sisters we actually meet.”

Following the Angelus, Pope Francis recalled the beatification – on Saturday in Sao Paulo, Brazil – of Mother Assunta Marchetti: the Italian-born co-founder of the Missionary Sisters of St. Charles Borromeo, known as “Scalabrinians” after the late 19th century bishop of Piacenza, Giuseppe Scalabrini, who helped found the missionary congregation originally dedicated to maintaining Catholic faith and practice among emigres to the New World, which now focuses its missionary work on migrants, refugees and displaced persons.

“[Bl. Assunta Marchetti] saw Jesus present in the poor, in orphans, in the sick, in migrants, said Pope Francis. “We thank the Lord for this woman,” he continued, “a model of tireless missionary spirit and courageous dedication to the service of charity,” who serves as an example and a confirmation of the truth that we can and must seek the face of God in the brother and sister in need.”

Pope Francis also had greetings for pilgrims from all over Italy and from around the world, especially those of the Schoenstatt movement, with whom he met on Saturday, and for the Peruvian community in Rome, which came to the Angelus in procession with an image of El Senor de los Milagros – the Lord of Miracles – an image of Christ crucified that was painted by an anonymous freedman in the 17th century in Lima, and that has become a focus of deep veneration and intense devotion, especially among Peruvians. 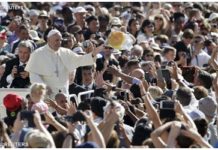 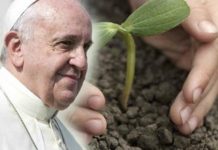 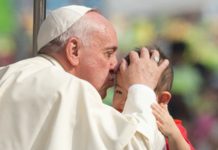