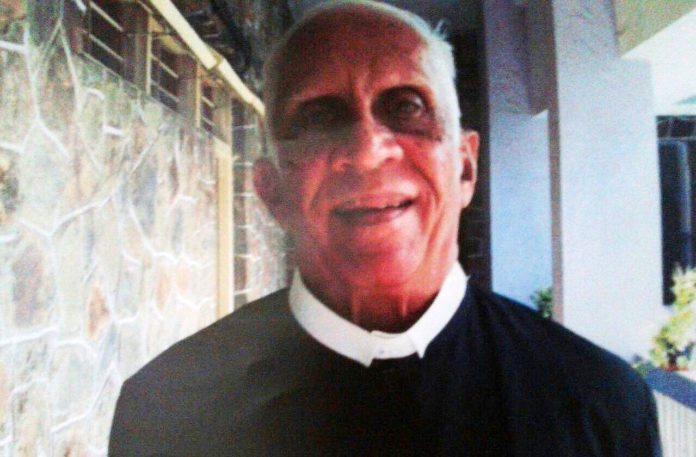 The Redemptorists of the Vice Province of Majella (Mumbai, Vasai, Goa and Mangalore) salute a brother, Rev. Fr. Peter DeSousa, C.Ss.R., whom God called to the fullness of life on the 17th December 2014, even as he served as Rector of the Community at OLPS Church, Chembur, Mumbai.

In the Gospel of St. Mark we read about the call of the apostle Simon Peter. This great apostle with his brother Andrew was in the boat casting a net into the sea, as they were fishermen. Then Jesus looks at them and says, follow me and I will make you fishers of men. And immediately as the gospel says, they left their nets and followed the Lord Jesus. Many, many years after that first incident as reported in the gospels, the Lord who continues to call, found another person by the same name of Peter. And this time it was not Simon Peter but Peter DeSousa. And just like Simon Peter, he found him on a boat as a young dashing officer on a merchant navy ship. And the Lord perhaps said the same words that he uttered to Simon Peter, “come follow me’. And in response to that call, just like Simon Peter who left his boat and followed Jesus, Peter DeSousa also left the boat and a future in this sailing profession and followed Jesus.  And thereby began his very conscious journey of becoming a disciple of the Lord Jesus; a journey that was expressed in living according to the spirit and charism of the Congregation of the Most Holy Redeemer (Redemptorists).

The first stop on this journey was at the Redemptorist Novitiate in Bangalore. It was here that Peter was first exposed to the rudiments of the religious life. And it was here that he made his first profession to be a Redemptorist in the year 1960. The journey continues through another eight years of rigorous study of theology and scripture and he was then ordained a priest at the Holy Ghost Church in Bangalore in the year 1966.

Very soon he was sent by his superiors to the U.S. to do his higher studies in psychology and in counselling. When he returned three years later, he was appointed as Rector of the Redemptorist Seminary at Mt. St. Alphonsus in Bangalore and served in this office for the next six years. However he continued his teaching assignment in the Redemptorist seminary.  He was elected as the Provincial Superior of the Bangalore Province, which then comprised of all the Redemptorist houses in India. He then shouldered this office in the Congregation for the next six years. He was also part of the administration and council of the newly formed Region of Mumbai and was able to bring his wisdom and experience in guiding the superiors as they worked to form the Region into a Vice Province. As a Redemptorist he worked in many different areas. He preached parish missions, retreats for the clergy and laity, he taught in the seminary, he was very much engaged in the family apostolate, in counselling and in administrative work.  He was a person who never delayed in doing the work that was entrusted to him. Today among many things, we remember him in our Congregation as a person who initiated new programmes or as a path finder among the Redemptorists. Let me just give you two examples.

It was during his tenure as Provincial that we Redemptorists celebrated the Golden Jubilee of our presence in India. Needless to say there were many celebrations during this occasion, but as a commemoration of this event, Peter initiated the beginning of a new mission at Kenya in East Africa. It was Fr. Peter who took a lot of trouble to travel to Kenya and back a number of times, spoke to the Bishop of the diocese of Meru in Kenya, and made the necessary arrangements for a Redemptorist mission to be established in that country. For this purpose he then chose a group of three young Redemptorists from the Province in India to begin this mission in Africa. Those pioneers, who went to Kenya, braved every hardship they faced, and slowly began to recruit local vocations to the Redemptorist congregation. Today as a result of their work, we have seven full fledged Kenyan Redemptorist priests working along with us in Kenya, and many other young Kenyan Redemptorists in various stages of formation in Kenya. We have great hopes that this mission in Kenya will grow and develop over the years, and we owe it to a great extent to the good offices of Fr. Peter.

The Church in India also will perhaps remember Fr. Peter deSouza for one very singular contribution that he has made to strengthen the bond of Marriage among couples. It was he who along with a couple named Pat and Dick Alexandro from the U.S. initiated the marriage Encounter movement in India. In those early days when he could not get couples to participate on the weekend sessions of Marriage Encounter he did not give up and it did not dampen his spirits. On the other hand he tried different ways by which he could give publicity for this Marriage Encounter movement. He began to conduct these sessions that were primarily meant for married couples, for groups of celibate priests. It looked odd at the beginning, but the movement itself gained momentum as time went on and many, many married couples began to reap many benefits from those weekend sessions. Fr. Peter would not hesitate to travel long distances along with the team couple, to conduct such M.E. Weekend programmes, even for just a few couples, whether in our own country or overseas.  He put all his resources, and even took a lot of financial assistance from his own family to get the movement started. Today many people have benefited from participating in the Marriage Encounter weekend programmes. Fr. Peter did this work with missionary zeal. His one intention was to strengthen the bond of marriage among married couples and to make their marriage become a sacrament of God’s love for each other. He was also much engaged in the Christian family movement. He constantly motivated the members in this movement to regularly conduct their meetings and helped out in whatever way he could strengthen the bonds of unity and love in a family. And many members in the CFM referring to Fr. Peter would say that he was an upright man, a man of character, a man who can feel the feelings of others.

He was a person who was always willing to help. If anyone requested him to help out in some work, he would never hesitate but would go out of his way to help. A person once shared that when her husband was suffering from cancer and was admitted in the Intensive care unit of a hospital, Fr. Peter was there present with the family. He was there for three full days at the hospital from morning till night, until the patient was discharged from the hospital. That was Peter; he was always willing to go that extra mile, to reach out to someone in need or to help people in their lives.

On the 12th December, when it was confirmed that the tumours he had were malignant and not much could be done for him, Fr. Peter wrote in an email to me, “At present I am strong enough to move around and look after myself.  It is hard to predict how long it will take before the Lord calls me to the Fulness of life.” When I asked him on the 13th December in an email if he had pain and if he would offer his pain vicariously for the new vice province of Majella to which he belonged and for me and my newly elected vice provincial team, he immediately replied, “ Ivel, at the present there is no pain only discomfort, but once the pains come, I will offer all my pain for you and for your team and for the growth of our Vice Province, what a joy it will be for me to be united to the Lord in his suffering for the sake of our Vice Province.” On the 16th he was admitted to hospital with acute pain and discomfort and before we knew it, on the 17th very peacefully he went home peacefully to his Abba, Father.

While we in the Vice Province of Majella mourn the loss of our dear Brother as sudden as his passing way was, we rejoice that he has gone home to the Father and to the fullness of life and wears the crown that St. Alphonsus our founder promised to all who persevere and live in the Congregation until the end. We thank Fr. Peter for all that he has been to us. We thank him for the work he has done in the church, and for the visibility he had given to the Redemptorists in India. But above all we thank him for the affectionate confrere and brother that he has been for many Redemptorists in the Province and to all in the Vice Province of Majella.

(With grateful thanks to Fr. Provincial of the Bangalore Province, Fr. S. Arulanandam, for excerpts taken from the Eulogy he gave at the Funeral service for Fr. Peter.)