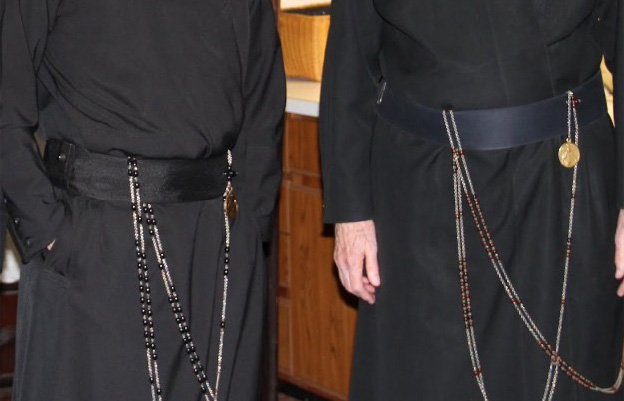 The religious brothers, or simply “the brothers,” have always been an important component of the Congregation of the Most Holy Redeemer. Based on the example of St. Gerard Majella, who lived at the same time as the Founder, with their humble and valuable services, the brothers have made an enormous contribution to the holiness and development of the Institute. This article – to which Brother Marcos Vinicius, a Brazilian, has collaborated – is related to the Year of Consecrated Life, which is about to begin (November 30, 2014 to February 2, 2016), and is meant to be a sign of recognition for all the good the brothers have done and still do in each Unit of the Congregation.

Religious dedicate themselves to God and neighbor through the profession of the vows of poverty, chastity and obedience. In male religious institutes there are also brothers. These are the ones who feel called to religious life, but not to the priesthood, who have different characteristics and spiritualities, according to the charism of the Founder.

Profile of the Redemptorist brothers

According to the Redemptorist Constitutions and Statutes the brothers “work together in the same missionary vocation of the Congregation, each contributing the service that is proper to himself. As far as possible, therefore, each must acquire the professional and ministerial competence that is needed.” (Const. 89). “The Congregation of the Most Holy Redeemer unites priests, deacons and lay members [brothers] who, both in the religious house and outside it, work together in brotherly union, carrying out one and the same mission.” (Gen. Stat. 01). Brothers are not second-class Redemptorists, but are just as fully missionary as the priests. Therefore we should say and write “Redemptorist Missionaries,” not “Redemptorist Fathers,” a term that indicates only a part of the Congregation of Redemptorist Missionaries. There are other characteristics: the priests and brothers live together in fraternal communities with the same rights and obligations, observing the same rule and following Christ as a model, both in his public ministry and his hidden life. Brothers have duties that are not priestly by nature, which can be very diverse: sacristans, receptionists, nurses, catechists, doctors, accountants, administrators, etc. How many are the possibilities for anyone who wants to become a Redemptorist brother! And how badly the community needs qualified people, able to perform these works that are not, strictly speaking, priestly!

How many are brothers are there and what do they do

Redemptorist brothers are distributed around the world as follows:

Currently the brothers are few and mostly elderly. Forty years ago they were 16% of the membership. Today they are 1.8%. Most of them are devoted to work in the house or sacristy, but in recent years, especially in Latin America and the Caribbean, the number of brothers dedicated exclusively to missionary activities or catechesis has grown. Among the new brothers there are those involved in administration, social work, architecture, teaching and formation, popular missions and so many other activities, according to personal abilities and inclinations.

In the past, there were so many brothers known either for their holiness or for their talents. Let us recall a few:

Gioacchino Gaudiello (+1741); Vito Curzio (+1745); St. Gerard Majella (+1755); Rosario Adduca (+1860); Francesco Tartaglione (+1744); then the famous Maximilian Schmaltz (+1930), author of the illustrations for the Roman Missal; the servant of God, Giovanni Battista Stöger (+1883); Br. Gerardo (Giovanni Battista) Uriati (1857-1905), carpenter, builder of cabinets and confessionals; the architect, Giovanni Stielhe, designer of the Cathedral of Cuenca, in Ecuador; the Vietnamese servant of God, Marcel Van (+1959); and Blessed Victoriano Calvo (+1936), one of the Spanish martyrs. Here, in Bussolengo, we also remember Br. Serafico from Innsbruck, whose statue of the Immaculate Virgin Mary we have preserved.

We remember especially the brothers: Gabriel Perciballi (see photo) at Rome in Monterone; Maurizio Agostini and Antonio Vellaci at Rome in San Gioacchino; Angelo Pizzamiglio at St. Mary Major; Luigi Raponi at Scifelli; Valentino Onorati at Cortona; Oreste Tardini at Modena and Pierluigi Di Cintio at Frosinone. The latter, together with Brothers Valentino and Antonio, are still alive, thank God. Let us dedicate a special remembrance to two brothers who lived for a long time in Bussolengo.

Brother Paul Durante, was born in Venegazzù di Volpago (TV) in 1908 and died in Bussolengo on November 12, 1982. At the suggestion of Fr. Luigi Panizzolo, pastor of Volpago, he became the first from the area to become a Redemptorist. After him, these others became Redemptorist priests: Giovanni Battista and Quirino Semenzin, Giovanni Batista Pessetto, Tito Furlan and Pietro, Armando and Carlo Rizzardo.

He carried out his apostolate in the Marian Sanctuaries/Shrines of Oropa and Bussolengo. At Oropa, where he remained for about 20 years, he was well known by the parish priests of Biella who led parish pilgrimages. Besides the work in the Sanctuary/Shrine, which in the summer began at 5 a.m., he took care of collecting data from the Meteorological Observatory located on Mount Camino (2,260 meters or 7,415 feet high) where he went even in adverse weather conditions.

The last 24 years of his life were spent in Bussolengo where he offered his humble and valued service in that Sanctuary/Shrine. One Sunday, in 1969, offerings for paving the plaza of the Sanctuary/Shrine were gathered during the Mass and Br. Paul went about collecting donations. Before he began, Fr. Giovanni said: “Look at Brother Paul who walks with difficulty, dragging his feet! Please do not give him heavy coins, but rather paper money, which is lighter!” And the people, smiling, heard him and did what he asked.

Brother Paul was also very devoted to the community. Every day he went out by bicycle to do some service. In his last years he suffered from diabetes, which resulted in the amputation of a toe on his right foot and, before he died, also the leg. He often said: “As God wills!”

Brother Prospero Fontana, born in Fellegara di Scandiano (RE) in 1915, died in Bussolengo on November 28, 1985. He entered as a postulant in Bussolengo in 1939. After beginning novitiate in Scifelli, he was called to serve in the army. He returned to Venice in 1945 and resumed his novitiate in 1947, until his profession at Scifelli on April 14, 1948.

He lived in the communities of Modena and Venice, and was then sent to Bussolengo where, for many years, he served as cook for the community. On Sunday mornings, the friends of the Sanctuary/Shrine, would often go to greet him after Mass, and he would give them a delicious broth. One day he had told some volunteers that he would carry the statue of the Blessed Mother at 3 p.m. When he did not appear, they looked for him and found him dead in his room, composed and serene on the bed, as if peacefully asleep.