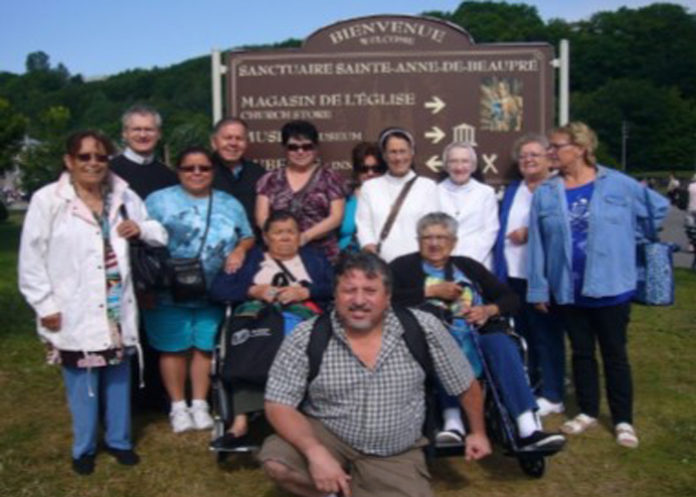 This summer I stopped to visit some friends of mine on Indian Island, Maine. In the picture at the right I introduce you to Sister Sue Lachapelle and Sister Judy Oliver. They belong to a religious community called the Sisters of Mercy. Frances Warde helped establish the Sisters of Mercy in the United States. She visited Indian Island in 1878. Sister Judy and Sister Sue are continuing this presence of the Sisters that has lasted for over 130 years! As you know, St. Alphonsus believed in the power of a religious community to reach out to those in remote places and to renew and sustain the Church’s presence there. This is another great example of how the life of poverty, chastity and obedience is a great witness of love in the Church. To read more about this ministry and especially about their witness against racism, you can go to the following link www.sistersofmercy.org/blog/2014/02/26/mercy-filled-encounter-with-the-penobscot-people/

When people from France set sail for North America, they called often upon a great friend, St. Anne. She is the patron saint of sailors and for those who need protection from storms. They were so grateful for her help in crossing the ocean to North America that they began to set up churches in honour of St. Anne.

The first nations’ peoples in North America have a tradition of honouringthe elders in their community. As some of them became Christians, they were introduced to St. Anne by the Francophone people. The Native American people grew in their friendship with St. Anne and honoured her as the grandmother of Jesus. In a sense they also “adopted” St. Anne as their own grandmother. One can find many churches on First Nation’s reserves dedicated to the honour of St. Anne. In the picture at the right you will see a statue of St. Anne in the parish that is based on IndianIsland which is home to the Penobscot People. Behind the statue is an icon of St. Kateri Tekakwitha. Patrick Bear is a member of that nation. He served with the U.S. army for a number of years in Vietnam.

Esther Bear is originally a member of the Passamaquoddy Tribe whichhas its traditional lands farther north in Maine from Indian Island. Esther tells the story of her grandmother making and then selling baskets made from ash and sweet grass, to save enough money to pay for travel and also to rent a cabin in which they stayed at Ste. Anne de Beaupré. Esther was impressed by the immensity of the church and how her grandmother would stay in the church until everyone had left. They would often be the last ones to leave as the doors of the church were closed. As an adult she was able to put words to feeling that “this was holy ground…this was very holy ground.” She and her husband, Patrick have been regular pilgrims to Ste. Anne de Beaupré since they were married. Patrick related of his trips to Ste. Anne de Beaupré, “you see God everywhere…in the people…in the statues…in the prayer”. The Passamoquoddy people started finding their way to Ste. Anne de Beaupré in canoes, along the waterways that join what are now Maine and Québec. Now they come by tour bus every year. Above is a picture of some of the group who arrivedthis year from the Pleasant Point Reserve and other communities along the way. You will remember that St. Alphonsus had a dream of sending Redemptorists to other continents in order to serve other nations. The Redemptorist ministry at Ste. Anne de Beaupré seems to me, to be part of the fulfillment of that dream.

I am meeting people at Ste-Anne-de-Beaupré from all nations. This pilgrimage site could also adopt the name of “United Nations”. Forexample in the celebration of just one Mass I met people from Stephenville Crossing in Newfoundland, Hamilton, Toronto, Illinois, Texas, Brazil, Japan, Drummondville, Val Cartier, and Fabreville. Of course in other celebrations and ministry I have met people who practice Hinduism, Judaism, Buddhism, Islam and many Christian religions. I have met people who are seeking spiritual enlightenment and who practice no particular religion. I have found this to be only one of the many exciting facets of life and ministry here at the Shrine of St. Anne.