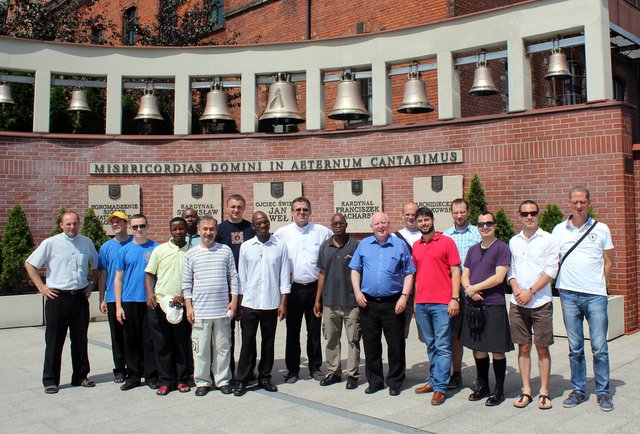 An international course of spiritual renewal took place at the Redemptorist seminary in Tuchów, Poland. The gathering, organized for the second time by the Redemptorists’ European Conference, lasted from 14th July to 5th August 2014. The course was mainly for those who are preparing for the perpetual vows in the Congregation of the Most Holy Redeemer, in which 13 were from different countries of Europe: Slovakia, Ukraine, Great Britain, Germany, Italy, Spain and also from Zimbabwe. Two fathers from Italy and eight from Poland have also participated in the first weeks of the course, as they celebrate the 10th anniversary of their perpetual vows. They have later departed for a joint pilgrimage to the Alphonsian places in Italy.

Lectures and prayers during the gathering, were in three languages: Polish, English and Italian, with simultaneous translation carried out by confreres who have given their time as interpreters during the course. Each day’s schedule was filled with prayers, special lectures and discussions with guest speakers from within the Congregation and from outside. The first speaker was the coordinator of the European Conference of the Redemptorists, Fr. Jacek Zdrzałek CSsR. For the first two days he spoke about the current scenario in which the Congregation finds itself, of the challenges facing us today, about initiatives being undertaken in Europe by the Congregation (including our new mission in Albania) and also about the joys and hardships of being a Redemptorist today.

Followed by Fr. Jacek, Fr. Ronald McAinsh CSsR, provincial of the London Province, gave three days of conferences on the theology and history of our Constitutions, and their practical implications. Fr. Alfonso Amarante CSsR, Professor of the Alphonsian Academy in Rome,  presented the topic of ‘the history and spirituality of the Redemptorists’ and in particular ‘the moral theology of St Alphonsus.’ Contemporary developments in moral theology were also discussed, as it is the pressing need for the Redemptorists to continue to dedicate themselves, through study as well as in the pastoral field, to this foundational element of our charism.

Fr. Janusz Sok CSsR, provincial of the Warsaw Province also met the participants of the course. He talked about the identity of the Redemptorist in the 21st century. In his reflections he talked about the reality of life as Redemptorists today, and the challenges which we face. The next two days were spent on lectures and practical exercises with a lay psychologist, Mrs. Jadwiga Juros from Opole (Poland). The exercises were dedicated to issues such as human formation, understanding our emotions, and coping strategies during difficult times – of the many she explained, prayer was the paramount one, including a daily inventory of our emotions and how we deal with them – in our life of celibate chastity.

Third week began with the lecture of Fr. Michal Zamovsky CSsR from Slovakia who presented the topic of preaching parish missions. On Tuesday the students took part in the REDCAMP (the International Redemptorist Camp of Evangelization) in Cracow. The next speaker, Fr. Andriy Oliynyk CSsR from Ukraine presented the topic, “Redemptorist’s work with immigrants,” and specifically that of Eastern rites – particularly relevant since some of the participants on the course are the Greek Catholic Redemptorists from Ukraine. A whole day was also dedicated to the vocation ministry and its methods, plus an afternoon of sharing vocation stories amongst the confreres present.

The last two days of the course were conducted by Fr. Jorge Ambel Galán CSsR and Fr. Víctor Chacón Huertas CSsR from Spain. They talked about foreign missions and youth ministry.

As has been emphasized by the participants, this time of being together helped the participants to understand better other cultures and rites in our Congregation and was an opportunity to get to know each other. This meeting encouraged greater openness for joint initiatives within the framework of the Redemptorist Conference of Europe and beyond. It was also a good opportunity to remind ourselves of our Redemptorist Saints, Blesseds, Venerables and servants of God, who have been taken as the various patrons for each day of this renewal course. Participants had the opportunity to visit the Shrine of Divine Mercy in Łagiewniki, monuments of Krakow, John Paul II Center in Krakow and his family home in Wadowice, and also Auschwitz-Birkenau Museum in Oświęcim.

Complementing the renewal month there will be an eight-day retreat for the students, within their own provinces, before their perpetual vows.