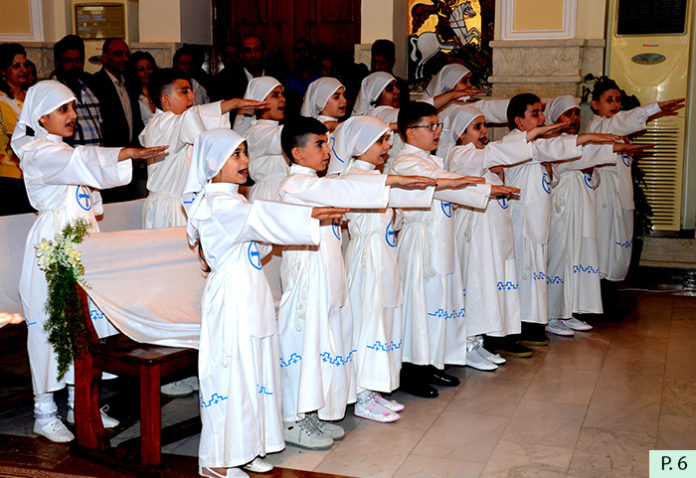 Today there are three Redemptorists still living and working in Iraq:  Archbishop Bashar Matti Warda in the Archeparchy of Erbil; and two priests in Baghdad – Fr. Meyasser Behnam, the youngest, who serves as a pastor and teacher and Fr. Vincent van Vossel who has been living in Iraq and teaching in the seminary for several years. Fr. Vincent has sent this letter and photographs…

Last year we wrote a letter to Scala under the title “Where shall we go?”The same title could be used also for this actual letter. In fact again Iraq lays under fire and a letter from the Redemptorists in that country might bring some news.

The Flemish “Missio Baghdad” was a flourishing and remarkable mission, until the year 2005. But in that year the mission was not allowed to exist any longer as a mission.

Today there are three Redemptorists surviving in Iraq. The bishop of Erbil Mgr. Bashar Warda, and two fathers in Baghdad. One of them is Fr. Meyasser Behnam. An Iraqi confrere who came from an important Syrian village in the North, QaraQosh. His parents and family are still living in the village which is situated half way between Mosul and Erbil, between the region of the rebels and the Kurds. At this moment both are fighting to occupy that territory. Last week, after a heavy shelling most of the inhabitants, Christians, fled away to Erbil. They suffered much on the roads and the checkpoints. After some days their bishop brought most of them back, to their houses, but the village remains without electricity or water supply. Fr. Meyasser in Baghdad suffers because of that terrible situation of  his family and friends in the North. Last Sunday, in Mosul, two Chaldean sisters with two of their orphanage girls and a young boy were kidnapped. We all are afraid for what those fanatics might do to them.

Fr. Meyasser served in Baghdad in the Sacred Heart parish, for three years. At the end of last year he was appointed by the Chaldean Patriarch in one of the most important parishes of Baghdad, Saint George’s. He made this neglected place into a fervent community. With his artistic constructions in and outside the church and his spiritual instructions, he attracted even the Patriarch to come and visit his realizations.

Fr. Meyasser is invited to give talks in other churches, and even in Sweden. He is a gifted preacher and a teaches in several institutes. He is responsible for the Baghdad Youth and travelled with them to Brazil for the Pope’s visit. He is also the director of our “Center for Eastern Studies” (50 students) in Baghdad. There we receive students of all different denominations to make them more acquainted with their own traditions. If a Christian wants to stay here, he should know why.

Since years we have candidates who assist and help us. But our province is extremely reluctant to consider them as “equal” or trustworthy. We suffer from all the troubles that are shaking the country, but still more from the attitude of some confreres.

photo 1): map of the situation of the village Qaraqosh.

p 2): At the entrance of our monastery hangs this picture made by Fr. Meyasser: an old Chinese-Nestorian cross combined with the Arab device: “In the name of God the Merciful”.

p 3) His Christmas “tent” was admired by the Patriarch and even some Iraqi ministers and a famous Muslim leader, Omar el-Hakim paid a visit and asked, why Jesus was born “in a tent?”

p 5) April 24th was the feast of the church and also of the papal nuncio: Mgr. Giorgio Lingua. A great feast was celebrated in Fr. Meyasser’s church in the presence of the patriarch.

p 6) First Communion, for 30 children of the parish…

p 7) The kidnapped sisters and orphans.