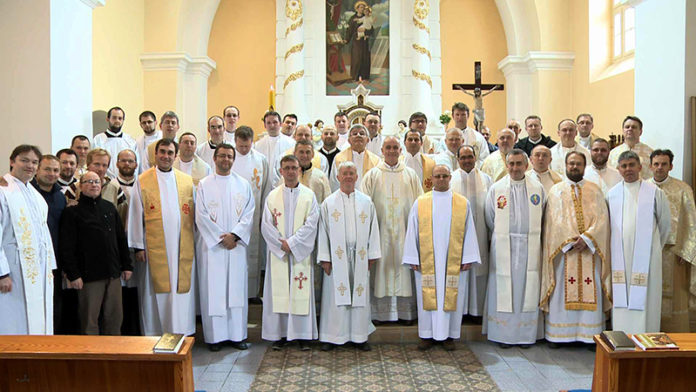 On June 2nd,  Redemptorists of the Prague Province,  the Bratislava Viceprovince and the Michalovce Viceprovince met together in Donovaly, Slovakia. The meeting was the conclusion of the General visitations conducted in these Units by the General Consultor, Fr. João Pedro Fernandes, and the Coordinator of Conference Europe, Fr. Jacek Zdrzałek. At the meeting, Fr. João spoke about the situation of the  Redemptorists in the world.

Brothers of Bratislava and Michalovce

Particularly striking were the statistics he showed about the number of confreres in all the Conferences, the number of students and the average age of Redemptorists in particular units. Fr. Jacek in his speech concentrated on the restructuring of Prague, Bratislava and Michalovce Units. Fr. General spoke of the meeting of all the General Superiors with Pope Francis, as well as of the Jubilee year of Religious that will be celebrated in 2015 and the Year of Our Lady of Perpetual Help that will be celebrated in 2016. There was also space for discussion about various issues raised by confreres. At the end of the meeting Fr. General presided over the Eucharist after which the Triptych was handed on to Bratislava Viceprovince.