(Clonard, Belfast) After a life of almost a century and a quarter, the women’s confraternity of the Redemptorist Church of the Most Holy Redeemer at Clonard, Belfast met for the last time on the last Sunday in November, Feast of Christ the King.

The Confraternity of Our Lady of Perpetual Succour and St Alphonsus was formally established on 14 July 1897 when Bishop Henry Henry of Down and Connor signed the formal document of affiliation. The Redemptorists had taken up residence in the former villa of a mill-owner, Clonard House, the previous November. By Easter, they had built a temporary chapel which was soon thronged by the people of the rapidly expanding West Belfast.

When Bishop Henry invited the Redemptorists to come to Belfast, he was particularly insistent that they should establish confraternities for men and women. A confraternity of the Holy Family for men was established within a week of the women’s.

Many of the first members of the confraternity were workers in the linen mills that had sprung up along the Falls Road in the latter decades of the nineteenth century. The mill women were particularly dedicated to Clonard. Their working day began at 6 am. They had a break for breakfast at 8. Shortly after the Clonard Fathers began to celebrate a daily Mass at 8 am, the mill women sent word to ask if the start could be delayed for five minutes to allow them to get up for Mass during their breakfast break.

The new Clonard Church was opened in 1911. The temporary chapel had been built for a congregation of 740 people, but often many as 1,400 squeezed into every last bit of space. With a spacious new church, the confraternities grew as the population in the west of the city did.

The period of the confraternity’s greatest expansion was in the years between it’s Golden and Diamond Jubilees (1947-1957). By then, it had grown to three divisions, each meeting on successive Sundays of the month. When the congregations filled every available space in the new church, it was clearly time to establish a second division (1927).  A third division, intended for younger women, was established in 1947. The women attended the 8 am Mass in Clonard as their ‘communion Mass.’ They returned to the church in the afternoon at 4 pm for the confraternity devotions in the afternoon, consisting of the rosary, sermon by the director and Benediction.

The women of Clonard were conspicuous on a Sunday afternoon as they made their way to and from the confraternity meeting in their Sunday best, usually topped off with a hat in keeping with the custom for church-going.

Big occasions were celebrated with special events. For the church “Holy Years”, the members walked in procession to visit four designated churches in the Belfast area. For the Golden Jubilee of the foundation of the two confraternities in 1947, the procession went to the field in front of Our Lady’s Hospital, in Beechmount. There the benediction was given by Dr Dalton, Archbishop of Armagh. The procession returned to Clonard, where another benediction was celebrated in the monastery garden.

The Diamond Jubilee of the confraternities was celebrated with two High Masses on successive Sundays, one for women and one for men, celebrated on an out-door altar built by the men in the monastery garden. The following year, in honour of the Lourdes Centenary, two processions were held for the men and women, ending with benediction at the Lourdes Grotto at St Mary’s in Chapel Lane.

A number of factors contributed to the decline of the Clonard Confraternities. In the first place, after the Second Vatican Council, there was a notable decline in confraternities world-wide as the emphasis passed to active participation in the liturgy in the local language.

Second, was the reconstruction of the Belfast urban landscape. Belfast was expanding when the confraternities had been founded. The narrow streets of ‘two up, two down’ houses that had been built to accommodate the mill workers were seriously in need of replacement. To allow the building of vast new housing schemes like Divis Flats, people were being moved out to the suburbs. Some continued to come to Clonard for the novena and confraternity, but the times were changing.

Worse was to come with the civil unrest of ‘the Troubles’ from 1969 onwards. Clonard, like the rest of West Belfast, was plunged into forty years of bombing, killing, hijacking and a constant military presence. Members who had remained faithful to the confraternity were finding it difficult, and often impossible, to get to Clonard on ‘their Sunday’ because of ‘trouble on the road,’ with public transport disrupted for an entire afternoon. To their eternal credit, many women continued to make their way across town, sometimes wondering how they would manage to make it safely home but convinced that their loyalty to the confraternity would be repaid. One woman in the commemorative brochure produced for the close remembers once having to drive up the Crumlin Road as far as the mountain because of a march, then down to Clonard by the West Circular road.  Her back-seat passenger commented on what a lovely day out we were having, but that it was a pity they had not brought the picnic!

Despite the loyalty of its many ageing members, it was decided earlier this year to bring the Clonard Women’s Confraternity to an honourable close. A special Mass was celebrated on Sunday, 24 November at 3 pm in Clonard Church. Bishop Anthony Farquhar, auxiliary bishop of Down and Connor, Fr Dan Baragry and many Redemptorists who had served some time as directors of the confraternity over the years attended. A large congregation of members and their families too attended.

The editor of Redemptorist Communications 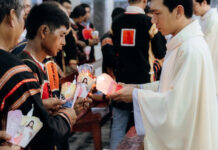 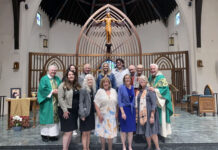 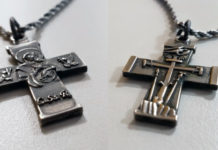