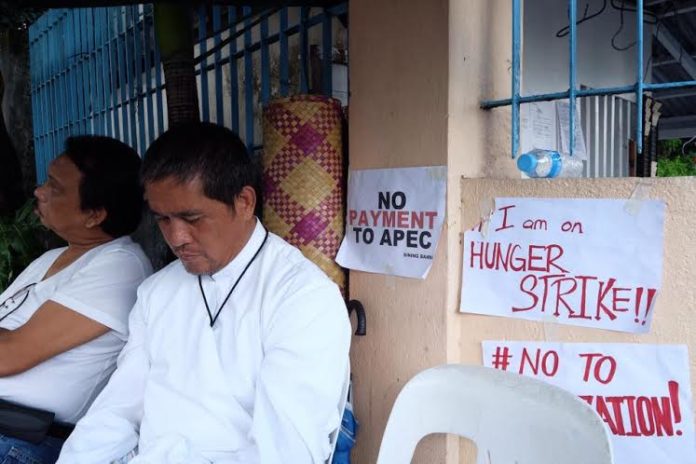 Redemptorist Fr. Oliver Castor has been on hunger strike since Sept 19 to protest the privatization of Albay’s power utility cooperatives. Fr. Castor said it is about time the government acts against “corporate impunity” involving the Albay Power and Energy Corporation (APEC). “This not just a political and economic issue. This is a moral issue,” said the priest who heads the Redemptorist Mission Center in Legazpi City.

He said the Redemptorist community has long been vocal against any attempt to privatize the Albay Electric Cooperative (Aleco). As a result, he said, they too, along with Aleco member-consumers, are being “punished” by the APEC management through “arbitrary disconnections”. On Sept. 16, some APEC employees disconnected the power supply of the Our Lady of Perpetual Help Church.

Fr. Castro said the timing was also “bad” since it was done while they were having a major event at the church. “At that time, there were many devotees because the pilgrim image of the Our Lady of Perpetual Help arrived in our church,” he said. The power supply was only restored after two days when they asked help from the Aleco, “but on Saturday, the APEC cut our connection again and took away our transformer,” he said. Castro said they have just been relying on a generator since then.

The 51-year old priest said it is “clearly a form harassment” by the APEC against them for “defending” the people, especially the poor. “It’s like we are being pushed to the wall,” said Fr Castro, who has been holding the protest right in front of APEC office. Volunteers Against Crime and Corruption (VACC) founder and chairman Dante Jimenez is also joining the priest in the hunger strike. Since Sept 19, the two have been going without food, taking only water. Fr. Castro vowed to elevate the matter to the Commission on Human Rights (CHR), adding that such harassment must be stopped.

In 2011, the National Electrification Administration (NEA) took over Aleco management and pushed for its privatization. Last year, the government allowed San Miguel Corporation-owned APEC to take control of Aleco. The privatization was intended to bail out the cooperative from its financial troubles amounting to around Php 4 billion over years of supposed mismanagement. Fr. Castro said the solution is not privatization but for the NEA to appoint Aleco managers “who are not corrupt.”

“Everything [is] being privatized in Albay from electricity generators and now even the power distribution,” he said. “We need to take a stand.”

The priest said he will continue the hunger strike until the issue is finally settled.

“I have a high blood pressure but this is part of the risk I took even if it costs me my life,” he said.