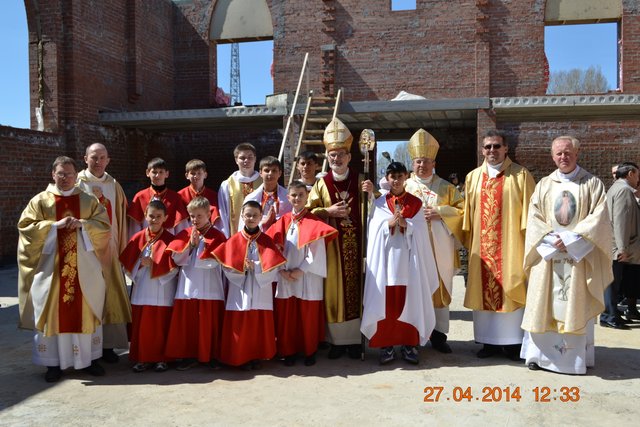 On the day of John Paul II’s canonization, the Parish of Our Lady of Fatima in Togliatti on the Volga, Russia, experienced great joy because of the cornerstone dedication and embedding of it on the new church which was dedicated in honor of the new Saint.

At the same time the people in Rome were preparing the canonization’s Liturgy, the people in Togliatti began a solemn Eucharist presided by Bishop Clemens Pickel, Ordinary of the Diocese of St. Clement in Saratov, and concelebrated by the Apostolic Nuncio in Russia, Archbishop Ivan Jurkovič. In his homily, the representative of the Holy See expressed his joy in participating in the celebration on the canonization day of the patron of the temple. In a few words, he brought the characters of both Pope John XXIII and Pope John Paul II closer to the believers, revealing them as the great pastors of the twentieth century. He stressed that John Paul II has contributed significantly to the revival of spiritual life after a period of suffering and persecution of the Church. “His life and work became a venue for dialogue between believers and unbelievers, between faith and reason” – said the Nuncio. He also exhorted the faithful people to be witnesses of that faith, saying that “the fundamental thing for the Church today is to proclaim Christ’s resurrection through performing good deeds, love and mercy acts, so that all people may believe that Jesus is the Christ, the Son of God; and that believing in him may have life in his name (J 20,31)”.

The Holy Mass was concelebrated by Fr. Jaroslaw Mitrzak – the Vicar General of the diocese in Saratov; Fr. Sylwester Cabała, a representative of the Provincial of the Redemptorist’s Warsaw Province, Poland, and Redemptorists fathers from Togliatti: the Pastor, Fr. Arthur Wilczek and Associate Pastor, Fr. Miroslaw Dawlewicz.

After Holy Mass, the numerous believers along with the altar servers and celebrants entered into the building temple. After explaining the significance of the rite, Bishop Pickel blessed the cornerstone derived from the rock on which the Shrine of Our Lady of Czestochowa, Poland, is built. It was donated by the Pauline Fathers to the representatives of the Catholic Parish in Togliatti during their pilgrimage to Our Lady’s throne at Jasna Gora last year. Next, the bishop laid a cornerstone in the back wall of the church, adding commemorative documents and photographs from ongoing celebrations in a special box. Then the Shepherd of the Diocese thanked the local Fathers and parishioners for their efforts in the building of the church and expressed the hope that in the near future he will be able to dedicate a new temple.

A representative of the parishioners, Mr. Vladimir, in his words of gratitude, said that “work on the construction of the walls and roof of the church is likely to come to an end this year,” but he also noted that “much more important is filling this new temple up with the prayer of the faithful people and the grace of the Holy Spirit”.

The Pastor of the parish, Fr. Arthur Wilczek CSsR added, “we still have a lot of work and organizational effort to do. We need to take the effort up for further funding, as we have already built the walls of the temple and the pastoral part of whole building. In the current year, we would like to cover the entire building with the roof, which means the church’s part, as well as the pastoral’s and monastery’s parts”- notes the Pastor.

“I would like to thank all the donors and all the institutions supporting us in this endeavor. We would be grateful to anyone who wishes to support further work at our church” – adds Fr. Wilczek.

Togliatti (until 1964 Stavropol on the Volga River) is a town of a million people on the left bank of the Volga River, Russia. It was founded in 1737 as a fortress to defend the southern borders of the Russian lands. In the 1950s, the city was transferred to the upper areas, as the old town was flooded because of the construction of a hydropower plant and water reservoir. Since 1964, the city bears the name of the Italian communist Palmiro Togliatti. In that time construction of the automotive industry began, which for nearly fifty years produced cars of the LADA brand. Rapid industrial development has caused a great influx of people from all the former Soviet republics.

Among the job seekers were Catholics, including those of Polish origin. It is they, in the early 90’s, in “Perestroika” time, turned to the Polish Primate, Cardinal Jozef Glemp, asking him to send a priest to Togliatti. The Cardinal handed the request to Bishop Tadeusz Kondrusiewicz, at that time the Apostolic Administrator for Catholics of the Latin rite in the European part of Russia. The bishop asked the pastor of Samara, which is 120 km away from Togliatti, to take the pastoral care of local Catholics. In 1998, a wooden chapel was placed in Togliatti, a gift from German Catholics, in which parishioners gather to celebrate the Eucharist and devotions until this day.

The Catholic Parish in Togliatti is named in honor of Our Lady of Fatima, but the their church, which is under construction, will bear the name of St. John Paul II, whose life was connected with Russia in a special way through the revelation of Fatima. He wore Russia in his heart, as he so often expressed. He spoke of her with great affection and so much wanted to visit Russia. St. John Paul II’s example and his teaching, what he left, are important signposts for Catholics in Togliatti. Indeed, it was a great joy for them, that the cornerstone dedication for their church was held on the canonization’s day of its patron.