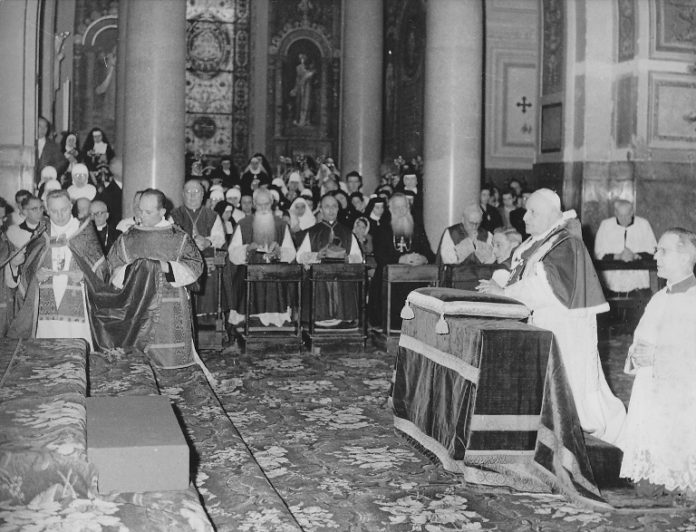 Our parish has written many unforgettable pages of history, which should be reread often in order to communicate the passions and sacrifices, labors and joys, and satisfactions and sufferings in them. Of these, let us look at two: the visits of two Popes, today saints, John XXIII and John Paul II. On March 12, 1961, John XXIII celebrated the fourth Lenten station in our church. For the numerous people present he first recalled that it was in precisely this church that, as a young priest, he came to confession and in 1904 directed his first words to a group of the faithful on the feast of the Immaculate Conception. Then he said that this church “recalls two great figures that are found at the end of the Old Testament and the beginning of the New: Joachim and Anne, the chosen parents of Most Blessed Mary.”

On February 7, 1982, less than a year before the attempt on his life in St. Peter’s Square, John Paul II came here on a pastoral visit. He said to the crowd that cheered him in front of the church: “I greet you with all my heart. We know that St. Joachim was the father of the Virgin Mary, the grandfather of Jesus. I see that, in solidarity with St. Joachim, many grandfathers have come and, in solidarity with St. Anne, many grandmothers.” After meeting with various church groups, he lingered in the Fathers’ dining room. He recounted how he had gotten to know the life of our founder and that in Poland he had prayed frequently before Our Lady of Perpetual Help on display in our church in Krakow and that the Redemptorists have played a significant role in his life.