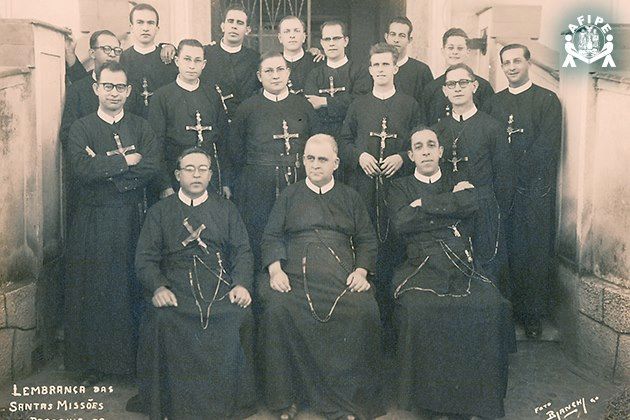 “To Christianize the Pilgrimage of Barro Preto”. It was with this objective that the Bishop of Goiás, in central Brazil, Eduardo Duarte da Silva, traveled to Germany around 1891, to request the help of the missionaries of the Congregation of the Most Holy Redeemer. This story of love, dedication and work of the Redemptorist Missionaries in Goiás began on December 12, 1894, when they took up residence in Campininha das Flores, today Campinas, a neighborhood of Goiânia, the capital of the state of Goiás.

On May 29, 1895, the Redemptorist Missionaries officially entered Barro Preto, but it was only in 1924 that these religious came to have a fixed residence in the city, which at that time was already known as Trindade. The presence of the Redemptorist Missionaries, priests and brothers, and the spirit of St. Alphonsus Liguori, founder of the Congregation, gradually transformed the physiognomy of the Pilgrimages, initiating a process of faith education for the faithful, creating new communities, assisting in the ecclesial organization of the diocese, establishing new parishes and, without counting the costs, attending to the whole people of God, no matter the distance.

Bishop Eduardo Duarte da Silva accepted the pastoral care of the Diocese of Goyaz in 1891. He knew the life of the people in the backcountry and, with special attention, concerned himself with the pastoral care of the Pilgrimage of Barro Preto, which brought together many people on the first weekend of July and which had not received adequate assistance from the Church. The bishop went to Europe in search of a religious congregation to attend to the pilgrimage, preach missions in the southern region of the diocese and take care of the Parish Nossa Senhora da Conceição in Campininhas de Goiás, which today is the city of Goiânia, the state capital.

He visited several superiors of religious congregations, including the then superior general of the Redemptorists, Fr. Matthias Raus, but did not get a positive response. Bishop Eduardo was already quite discouraged. According to Msgr. Francisco Ignacio de Souza, who accompanied the bishop on this journey, that very same night Father Matthias had a dream of the founder of the Congregation, St. Alphonsus Liguori. The next day he sought out Bishop Eduardo and recommended that he go to Bavaria and talk to the provincial superior, Fr. Anton Schöpf, who would be the one to send a group of missionaries to Goiás.

Bishop Eduardo went to Germany and took care of the travel details for the group headed to Brazil. Soon, it was made known that half of this group would stay in São Paulo. Those designated to go to Goiás were: Gebardo Wiggermann (superior), Johannes Spaeth, Michael Siebler and the clerical student, Lorenz Hubbauer, besides the brothers Norbert (Michael) Wagenlechner, Ulrich (Josef) Kammermeier, Gebardo Konzet and Nepomuceno (Johannes Nepomuceno) Grillhisl.

The group of pioneer missionaries met at the Bavarian monastery of Gars on September 20, 1894, and received a visit from the superior general, who gave orientations regarding the challenges they would face in Brazil. Fr. Matthias gave a blessing that was certainly the blessing of Alphonsus Liguori himself, the founder of the Congregation of the Most Holy Redeemer, for the most abandoned and forgotten in the mountains around Naples, and (why not?) of the Brazilian backlands. This was the impression of the leader of the mission, Fr. Gebardo, a year after his arrival in the country: “I am seriously tempted to affirm that the Congregation was founded especially for Brazil.”

The trip took 16 days. They arrived in Rio de Janeiro on October 21st of that year. Those who were going to Goiás left Rio on November 5th. In a trip that took two days, they went by train to Uberaba, in the company of Bishop Eduardo. From there, on November 17th, they set out on horseback, headed to Campininhas of Goiás, a journey of 480 kilometers, which took 26 days.

This story ends at 1:00 p.m. on December 12, 1894. It was raining heavily. Completely soaked, they finally arrived at their destination, their destiny. They were welcomed by the vicar, Fr. Inácio de Souza. Before the main Church of Senhora da Conceição, full of gratitude to God and the Virgin Mary, they sang the Te Deum. The trip ended: but this was the beginning of the Redemptorist mission in central Brazil.