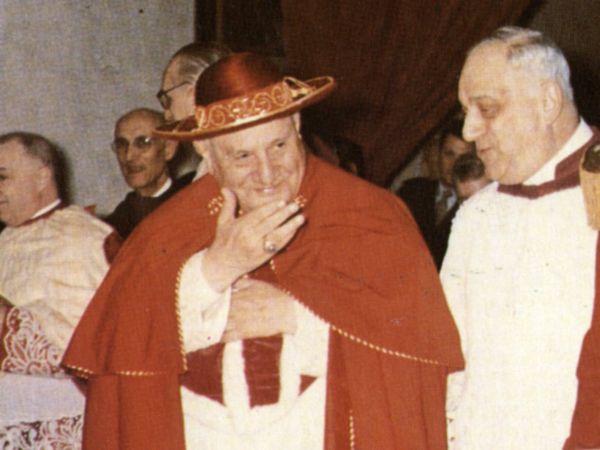 Following is a translation of the address of Pope John XXIII in which he first announced his intention of convoking an ecumenical council. The address was delivered to 17 Cardinals in the Basilica of St. Paul-Outside-the-Walls on January 25, 1959.

This festive anniversary of the Conversion of St. Paul, which brings us together here in this renowned basilica around the apostle’s tomb, prompts us to open our mind to you, confident of your kindness and understanding, regarding certain outstanding points of apostolic activity which have been suggested to us by these three months of presence in and contact with Roman ecclesiastical circles.

We have before us the sole prospect of the good of souls and of the very clear and definite correspondence of the new pontificate to the spiritual needs of the present hour.
We know that the new Pope is watched by many fervent and friendly elements, as well as by those which are unfriendly or uncertain, seeking to discover from what is most characteristic what one may have the right to expect from him.

It is quite natural that there is coming to be fixed in the tissue of daily activity, which contains the more increased and the ordinary manifestations of pastoral duty, a certain more distinct element which — almost as though giving a sign of one of the most expressive notes of the physiognomy of a pontificate, if not its principal and only note — is beginning to take its place more or less happily in history.

Well, venerable brothers and our beloved sons, thinking again of the twofold duty entrusted to a successor of St. Peter, there immediately becomes evident his double responsibility as Bishop of Rome and Shepherd of the Universal Church. These are two expressions of the one single suprahuman investiture: two attributions which cannot be separated, which must be mutually inclusive, for the encouragement and edification of the clergy and the entine Christian people.

Above all, there is Rome, transformed completely in the course of 40 years into a city totally different from that which we knew in our youth. Here and there one can still see its most ancient fundamental architectural lines, which are sometimes difficult to trace. This is particularly true on the outskirts of the city, now enveloped in a mass of houses after houses, and of many, many families, which have come here from every part of continental Italy, from the neighboring islands and, one may say, from the whole world. It is becoming a real human beehive from which emerges an uninterrupted buzz of confused voices in search of harmony, a hubbub in which they easily become mixed and lost. Thus there is rendered toilsome and slow the effort for the unification of spirits and constructive energies which tend to an order corresponding to the requirements of the religious, civic and social life of the city.

The Cardinal Vicar has with great care acquainted us with the spiritual position of Rome from the viewpoint of religious practice, of the arrangement of the various institutions of parochial character, of worship, of assistance and of Christian instruction, and we are pleased to take this opportunity of paying homage to the reality of a commendable effort on the part of the Cardinal and his collaborators who have been zealous and tireless in vigilance and in the apostolate, exercised from the center to the outskirts of the city by both secular and religious clergy as well as by their collaborators in Catholic associations. All have been motivated by right and clear intentions with a constant and sincere diligence.

On the other hand one must note that there is repeated that episode in the Gospels when the crowds called upon to follow the Lord and gather around I lim were helpless and unable to find the nourishing food of grace. This episode is repeated and it touches the troubled heart of the Shepherd. A few loaves: a few fishes: ” What are these among so many?” With this note all is said: as regards an increase of energies, of the coordination of individual and collective efforts capable of producing, with the help of the Lord, an intense spiritual cultivation through a more abundant and happy production of beneficial and holy fruits in the sense of “Thy kingdom come” and in a fervor of more fecund parochial and diocesan life.

Oh, what a wonderful spectacle if the Bishop of Rome extends his watchful care to the whole world, to whose spiritual government he is made responsible through the divine mission entrusted to him in the succession of the supreme apostolate! It is a happy spectacle, on the one hand, where the grace of Christ continues to multiply the fruits and portents of spiritual elevation, of health and sanctity in the whole world. On the other hand, it is a sad spectacle when confronted with the abuse and compromise of the liberty of man who, not knowing the open heavens and refusing faith in Christ the Son of God, redeemer of the world and founder of the Holy Church, turns his search entirely to the pursuit of so-called earthly goods, under the inspiration of him whom the Gospel calls the Prince of Darkness and whom Jesus Himself in His last discourse after the Supper called the prince of this world. This Prince of Darkness organizes the contradiction of and the battle against truth and welfare, the nefarious position which accentuates the division between those called by the genius of St. Augustine the two cities, and he keeps ever active the effort to confuse so as to deceive, if possible, also the elect and bring them to ruin.

To crown misfortune for the ranks of the sons of God and the Holy Church there is added the temptation and attraction to the advantages of a material order which modern technical progress — indifferent in itself — increases and exalts.

All this — we speak of this progress — while it distracts from the search for higher goods, weakens the energies of the spirit, leads to a relaxation of the structure of discipline and of the good ancient order, with serious prejudice to that which constituted the strength of the Church and her children against the errors which in reality, in the course of the history of Christianity, have always led to fatal and sad divisions, to spiritual and moral decadence and to the ruin of nations.

This observation arouses in the heart of the humble priest whom the manifest indication of Divine Providence led, though unworthily, to this height of the Supreme Pontificate — arouses, we say, a decided resolution to recall certain ancient forms of doctrinal affirmation and of wise provision of ecclesiastical discipline, which in the history of the Church in an epoch of renewal yielded fruits of extraordinary efficaciousness, through clarity of thought, through the solidarity of religious unity, through the living flame of Christian fervor in which we continue to see, even in regard to the well-being of life here on earth, abundant riches from “the dew of heaven and of the fatness of the earth” (Gen. 27:28).

Venerable brothers and our beloved sons! We announce to you, indeed trembling a little with emotion, but at the same time with humble resolution of intention, the name and the proposal of a twofold celebration: a diocesan synod for the city, and an ecumenical council for the Universal Church.

For you, venerable brothers and our beloved sons, there is no need of abundant illustrations concerning the historical and juridical meaning of these two proposals. They will lead happily to the desired and awaited bringing up-to-date of the Code of Canon Law, which should accompany and crown these two tests of the practical application of the provisions of ecclesiastical discipline, as the Spirit of the Lord will suggest to us little by little along the way. The forthcoming promulgation of the Code of Oriental Law will give a presage of these events.

For the present day this communication made to the entire Sacred College assembled here is enough, and we reserve to ourselves the transmitting of it to the other cardinals who have returned to the various episcopal sees entrusted to them throughout the whole world.

We would be grateful to each of those here present and to those far away for an intimate and confident word assuring us of their attitude. We would also be grateful if they would kindly offer their suggestions to us on how to carry out this triple program.

The knowledge which was already fairly familiar to us, and which has been confirmed and amplified by these three months of our introduction to the service “of the servants of God/’ encourages us to trust in heavenly grace. Above all, we trust in the intercession of the Immaculate Mother of Jesus and our Mother, in the protection of the Ss. Peter and Paul, “Princes of the Apostles,” as well as of the Ss. John the Baptist and John the Evangelist, our special patrons, and all the saints of the heavenly court. We implore them all for a good beginning, continuation, and happy outcome of these proposals for a great work, enlightenment, edification and happiness of all Christian people, for a renewed invitation to the faithful of the separated communities that they also may follow us amiably in this search for unity and grace, to which so many souls aspire in all parts of the earth.

Venerable brothers and our beloved sons! How sweetly and encouragingly return to us the words of St. Leo the Great which the Sacred Liturgy invites us now more than ever to recite. The salutation of St. Paul, the convert of Damascus, who has welcomed us here near his most sacred memories, resounds with more life on this day: “You are my crown and my joy, if your faith, which from the beginning of the Gospels is preached throughout the world, perseveres in sweetness and holiness” (St. Leo Great, Sermon 2).

Oh! What a greeting this is: wholly worthy of our spiritual family! a greeting and a wish. Benedictio Dei omnipotentis Patris et Filii et Spiritus Sancti. Amen.