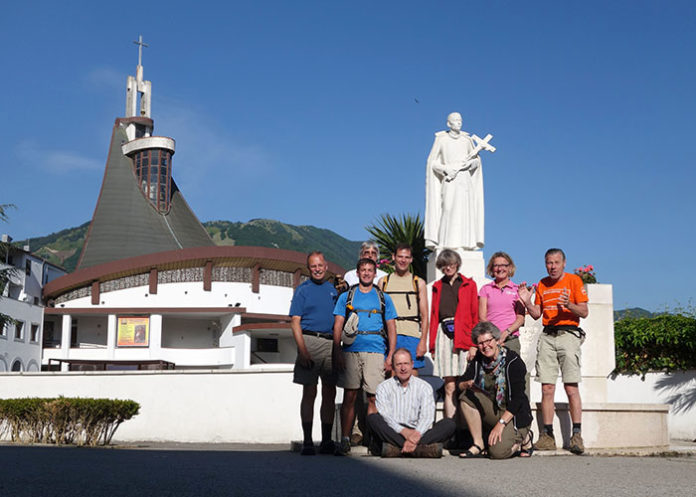 On Thursday 4 June, 2015 nine pilgrims finished a two week walking pilgrimage in the land of St. Alphonsus and St. Gerard, in southern Italy. The Dutch and German pilgrims from St. Clement’s Province started on 22 May in Pagani and continued on foot to Scala, Ciorani, Materdomini, Muro Lucano and returned from there to Naples. Two associate members of the Province, Mr. Jelle Wind, the province secretary, and Mrs. Marianne Debets, a pastoral/spiritual counselor, organized the pilgrimage. It was the sixth walking pilgrimage since 2005 (the commemoration of the 250th anniversary of St. Gerard’s death) and the second time that the itinerary has included all the Redemptorist places mentioned above without bus transfers in between.

The participants were overwhelmed by the beauty of the landscape, the hospitality of the people, the rich Redemptorist heritage in this region, as well as being impressed by the religious fervor of the people in southern Italy. The group celebrated Pentecost in the ‘grotto’ of St. Alphonsus in Scala and participated in the ‘Day of the Roses’ (a Day for Mothers and Young Children) in Materdomini. They also spent a night in the monastery at Ciorani.

Each day there were times of meditation and reflection that sometimes took place at the start of the day or on the way to a particular place. On arrival at a destination there was a sharing about the lives and spirituality of St. Alphonsus and St. Gerard. In this way, the pilgrims could try to appreciate the compassion found in the spirituality of the Redemptorists in the past and in the present and what it could mean for them in the future. At times the group walked for half an hour in silence, which were opportunities that were found to be very valuable.

During the pilgrimage the group covered some 250 km, staying in nine different places. The route led them over quiet asphalted roads, unpaved roads, dirt roads and mountain tracks. In mountainous areas the path was sometimes difficult to find due to the excessive growth of ferns and bushes as some of the mountain trails are almost never used.

Due to the differences in altitude (sometimes from 600 to 1000 meters above sea level), the difficult footpaths and the duration of the daily hike (on some days 8 to 10 hours), the trip is only suitable for people in good physical condition and with hiking experience in mountainous areas. Fortunately the luggage was transported between the lodgings.

Looking back the participants were very pleased with this unique experience that turned out to be much more than an ordinary holiday or hiking tour.

Interested people can contact Mr. Jelle Wind, the secretary of the Province St. Clement, (info@stclemens.org) for more information about organizing such a walking pilgrimage themselves and for the GPS-route.