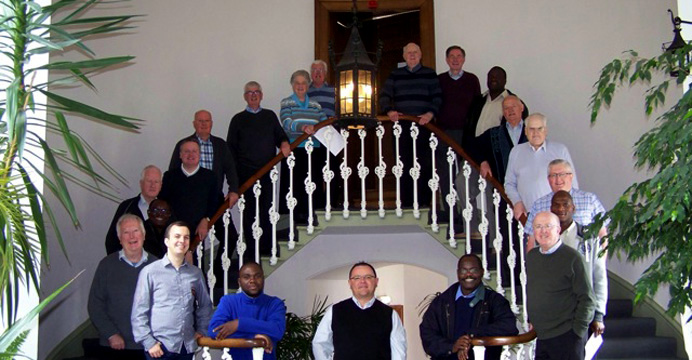 The London Province has long and distinguished history and on 24 May 2015, it celebrates a jubilee, 150 years as a Province .

Some data from the History of the London Province:

In 1882, the Province sent six Redemptorists (half of the province!) to start the first foundation in Australia.

In 1898, the Irish houses of the province were made an independent province, and the Australian houses became dependent on the Irish province.

In 1912, the then called English Province, started a Vice-Province in South Africa, which became a province in 1989.

In 1989, the residences of the South African Vice-Province in Zimbabwe became a Region of the London Province.

There are 57 Redemptorists in London Province (1 bishop, 51 fathers, 3 brothers and 2 professed seminarians). There are also the two philosophy students who have been accepted for novitiate and one postulant.

The confreres continue to maintain a variety of ministries such as parishes, pastoral centres, a publication house, the ministries of retreats and mission preaching as well as the work of formation and vocations. Their work for the abandoned poor through the Ace of Clubs project in London and the John Paul Center in Middlesbrough are also outstanding.

The work of the two renewal centers (in Hawkstone and Kinnoull) perform an important ministry in the formation of lay people, clergy and religious. Perth serves as a training and renewal center for Scotland while Hawkstone ministers to the needs of religious and clergy from around the world.

Members of the province also serve in the new mission in Albania, in Luxembourg, and in the General House.

“Redemptorist Publications” reaches out to thousands through its weekly bulletins and publications. The efforts at an ecumenical outreach are also well known in UK across the country.