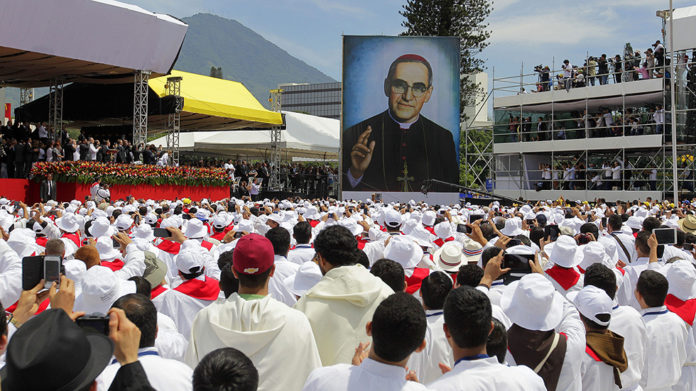 If the persecutors of Mgr. Romero “disappeared into the shadows of oblivion and death, the memory of Romero instead continues to be alive and to give comfort to all the underprivileged and marginalized people of the earth”: said Cardinal Angelo Amato, Prefect of the Congregation for the Causes of Saints, who presided a solemn celebration for the beatification of Archbishop Oscar Arnulfo Romero Galdámez on Saturday, May 23 in San Salvador, killed “in odium fidei” on March 24, 1980.
In his homily Cardinal Amato pointed out that Romero’s option for the poor “was not ideological but evangelical. His charity was also towards the persecutors to whom he preached conversion to the good and to whom he assured forgiveness, in spite of everything”. Mgr. Romero did not appear deterred by threats of death or by the criticism he received daily, this is why, stressed the Cardinal, he is not a “symbol of division, but of peace, harmony, brotherhood”.
The Episcopal Conference of El Salvador, in the message released for the Beatification of Mgr. Romero titled “Come share your Master’s joy” (cf. Mt 25:21), recalls that “Mgr. Romero’s death moved the world”, and in these thirty-five years since then “the path has not been easy … the greatest difficulty was the manipulation of the figure and the words of the future blessed”. This is why the Bishops point out in their message, that Romero “was a man of God”, a man of profound communion, totally abandoned to the will of God. He was also a “man of the Church”, according to his episcopal motto “Sentire cum Ecclesia”, to which he dedicated the four pastoral letters written during his ministry as Archbishop. In one of these, “he explained extensively that the Church exists to proclaim and make present the mystery of Christ” and illustrated how the Church he wanted to build in El Salvador had to be “in harmony with the teaching of the Second Vatican Council”.
Mgr. Romero is known for “his love for the poor and his complete dedication to the promotion and defense of their dignity as persons and as children of God”. The last aspect that the Bishops focus on is Mgr. Romero witness of faith to the shedding of his blood”. “Mgr. Romero was assassinated because he loved the poor, following the example of his Master, Jesus of Nazareth – they write -. He devoted his life to them”.
“This is the man of God that as of May 23 we venerate as Blessed – the Bishops conclude -. May his testimony stimulate us to live our baptismal commitment. May his word enlighten our path of Christian life. May his intercession open paths of reconciliation among us and help us to overcome all forms of violence in order to establish justice, truth, love and peace”. (23/05/2015)