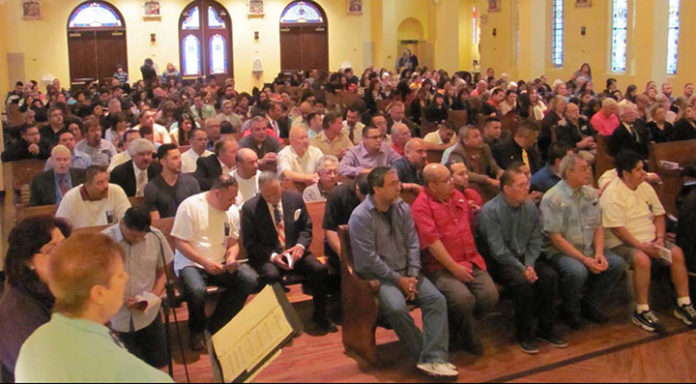 The Holy Spirit converged on St. Gerard Parish from two different fronts to form a spiritual “perfect storm” on  Sunday, April 6: the welcome back of the participants of the parish’s first Men’s ACTS retreat and the arrival of      Fr. Tom Donaldson to begin the Parish Mission that evening. There was a lot of whoopin and holleran that made even Fr. Tom remark that he had rarely seen a parish so pumped in advance of one of his missions. Of course the enthusiasm continued that night and the following two nights of the mission – which was delivered as only      Fr. Tom can to the well-prepared and very receptive audience. The ACTS retreat members were welcomed back by Pastor Jim Shea at the 10:30 am Sunday Mass after two-and-     a-half days of wonderful witness and sharing among the men, which renewed them in adoration, community,       theology andservice – ACTS. This retreat has its origins in San Antonio but has spread throughout the country.          In fact, in the congregation were members of the ACTS team – and friends of mine – from our former parish of Mary, Mother of the Church in St. Louis. They originally had planned to come down for a visit and to see the     sights in San Antonio, but after finding out that the retreat was the same weekend, encouraged me to go on the     retreat and not to worry about showing them around. They attended the welcome back Mass at St. Gerard’s, as   did my brother, Ron Ziuraitis. The St. Louis visitors enjoyed seeing Fr. Tom again too, since he had given a parish mission to them many years ago – the one that was filmed and widely distributed around the country. The Holy Spirit has stirred up many spiritual gifts in the parish as a result of the retreat and the mission, which         we hope will deepen the parish’s evangelizationefforts. A preview of things to come were the 17 baptisms at the Easter Vigil. The retreat has stirred up a refrain/response among the parishioners that both Fr. Jim and I invoked during our Easter homilies:God is good…All the time…All the time…God is good!