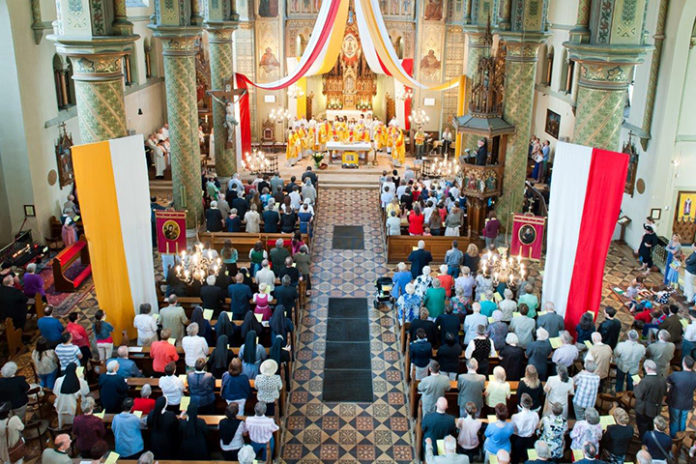 There were many guests from and outside of Austria who participated in the “city celebration”, the closing celebration of Clement Hofbauer year in Vienna. Among them were the provincials and vicars of neighbouring provinces of St. Clement, Munich, Bratislava, Prague, Warsaw, Lviv and Denmark. There were also many representatives from other religious congregations, from oblates and collaborators of the congregation, of public authorities and the church in Vienna. Fr. General Michael Brehl was the guest of honour and the main celebrant for the solemn mass in the Marian church in Hernals, Vienna at Clement Hofbauer Square.

The solemn mass at the Marian church (Mother of Perpetual Help) was a real celebration of generations (including little children, students, youth, choirs and many friends of the congregation).

“St. Clement M. Hofbauer is a very human saint with the great gift of friendship. He was a great prayerful person who can also teach us today how we should pray. Finally, he is a modern saint, because he has shown us how we can carry out our daily life as Christians.”  Fr. Brehl has pointed out these three dimensions of the patron saint of Vienna in his sermon held in English. “He has never demanded from others which he himself has not done.” St. Clement stands for a down to earth and practical spirituality.  Fr. Brehl also told the children who came in great numbers, “Clement has felt in himself that the tabernacle is in us, that we carry and meet Jesus in us. Wherever clement was, he spoke to Jesus as a friend.”

In his friendly manner Fr. Brehl particularly emphasized “that Clement was able to reach out to the people, because he did it in a way that all could understand. He used simple language and lived it as an example.” Moreover, in an era of nationalism, all the houses founded by him had to be international in character, so that they could reveal the reconciling effect. Fr. Brehl especially emphasized, “that at a time of clericalism, Clement gave the faithful and the baptized a major role in the celebration of the holy mass and in preaching.” All should preach the gospel in the liturgy. The gospel must be “articulated new” by each generation.

As a résumé, the Superior General from Rome wanted the participants know with a view on Clement: “It’s about the whole person; its matter of living the friendship very specifically. God is active in our lives…” At the celebration hall, the Superior General gave a glimpse of the congregation worldwide. “In Asia, we grow quite rapidly and we need to look in tocreating proper structures there. Similarly, in Africa, we encounter poverty directly. It is very positive to see that that so many women and men worldwide live their vocation responsibly and seriously in their own way as baptized. Collaborators are a blessing for our missionary community.”

Go to the marginalised

In an interview with Klemensblätter (the newsletter of Vienna province), the Superior General points out: “The congregation should put the poor at the centre of all efforts”. “When Pope Francis calls us to go to themarginalised, to the abandoned and the poor, then, that applies also to the “heart of the vocation of the Redemptorist missionaries” says Brehl: “Redemptorists must be on the side of the poor, we need to stay at the outskirts and close to the Forsaken. This applies to us whether we are in the city of Vienna or in the villages of Austria; and this applies equally to the city of New York and the Amazon region. “

The representatives from other provinces and also from the Missionary Sisters of the Most Holy Redeemer gave short felicitation talks.

“Do not keep the ashes, but carry on the fire further”

Provincial Fr. Lorenz Voith thanked in his address all the numerous guests from and outside of Austria and as well as for the preparation and efficient celebration in Hernals. Further excerpts from his speech: Almost after 90 years after his death, the church in Vienna – with prominent support- started this initiative in Rome. An appreciation for one who was not always a comfortable saint to deal with, on whom the state authorities kept an eye, who was imprisoned and badly treated with.

You are all familiar at least with a part of his eventful life story … This saint represents a type of missionaries, whom we need today more than ever. Flexible in pastoral methods, faithful to the roots, open for the time, the needs and to the world, at the same time equipped with a deep rooted faith.

A city pastor of modern art

His home here in Vienna was a monastery and yet not an enclosure, open to many … a hub for young and old, rich and poor. Artists, soldiers, noblemen, … His small church in Vienna slowly became a centre of attraction … different from the rest, … And he went out – to the outskirts… constant pastoral care, …

If we the Redemptorists look upon this great saint, who remained always quite “normal”, then this can be even our task. Mission, presence in the urban world.

Presence in a city … where openness, anonymity, distance and at the same time abandonment, … always coexist side by side.

If we the Redemptorists look upon this great saint, does it not mean that we keep looking back, keep our view to the past. Not all.

When we celebrate, then it also means: “Do not keep the ashes, but carry on the fire further”. And this fire was and is set on in many perspectives. So, for example, the work here in the Marian church for many decades. And today, to where should we pass on this fire from here? Well quitedifferent from that of 20 or 40 years ago… This fire was kindled in the initiation of the great counselling centre “Gesprächsinsel” in the citycentre. Thank God for the many members of other religious congregations, secular institutes and trained lay people.

This fire is rekindled in new forms of small counselling groups, in an individual pastoral initiatives, …  Above all, this fire was and is set on in collaboration with laypeople, in associations, groups of friends … etc. alot happens here – not always so visible to the majority.

May the fire – i.e., the Holy Spirit, our spirituality, our charism – let us try to spread it further.