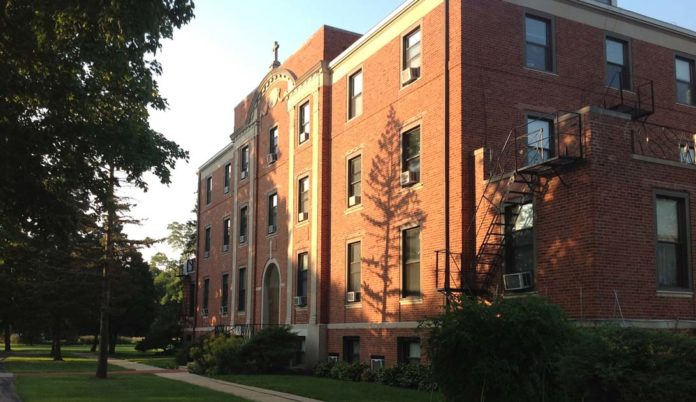 The Redemptorists marked the end of an era with the sale of Villa Redeemer in Glenview on Wednesday, April 22. David Weekley Homes purchased the property and plans to build a community of 48 single family homes on the site that will be marketed to seniors. A portion of the property was sold to the Glenview Park District in 2012.

The foundation of Most Holy Redeemer at Glenview was canonically established as a mission house and retreat center on September 7, 1932. Fr. Daniel Higgins, renowned missionary to the Deaf, served as the first superior of Villa Redeemer when it was little more than 50 acres of land and a brick house. Within a year, the stately brick monastery for Redemptorist missionaries, who fanned out to various areas to preach Plentiful Redemption, was completed. In June 1933, Villa Redeemer became the temporary home for newly ordained Redemptorist priests being initiated into the preaching apostolate of the Redemptorists. For a number of  years, a group of eager young priests arrived in June for a six-month stay, and departed in January to their first permanent assignments, which might take them as near as Chicago or as far afield as Brazil or Thailand.Fr. James Vance began a postulancy and novitiate program for Brothers that included many high school courses at Villa Redeemer in 1940. The school was relocated to Villa Majella in Pine City, MN in 1958.

A permanent retreat program was begun in 1941, necessitating the construction of a separate building to serve as a retreat center. It was gradually expanded over the next decade, in the hope of eventually replacing the original facility with a permanent structure. During the ensuing decades, lay retreat activity declined and the building began deteriorating. It was finally demolished in 2001. From 1971 to 1996, Villa Redeemer was the official residence of the St. Louis Provincial Superior and his Consultors. When the Denver Province was formed in 1996,the provincial residence was moved to Denver. At that time, the monastery became the North American Redemptorist Novitiate serving the English-speaking provinces of Baltimore, Denver, Edmonton-Toronto and Yorkton, as well as the Vice Provinces of Richmond and New Orleans, and the English-speaking Region of the Caribbean.

The novitiate was relocated to Toronto, Canada in 2010, and plans were made to sell the Villa Redeemer property. The Glenview Park District will maintain the cemetery on the property. Fr. William Devine, C.Ss.R. was buried there in 1943, the first of 102 Redemptorists who were true to the task to which God called them: open the doors of countless hearts to the warmth of His love and mercy, for “with Him is Plentiful Redemption.”