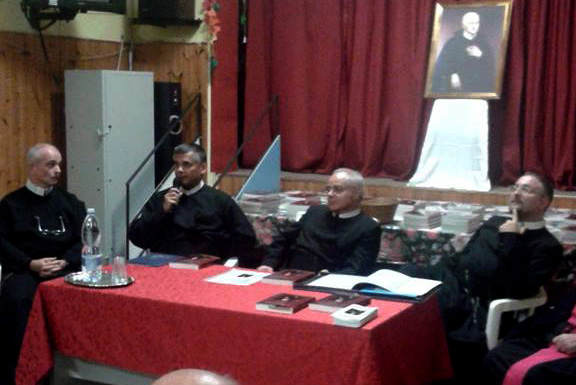 Celebrations of the second centenary of the death of Fr. F. A. de Paola, second superior general of the C.Ss.R., were held on November 15-16, in the Redemptorist community in Frosinone. The centenary, strongly supported by Fr. Giuseppe Orlandi, was promoted by the Province of Rome, with several initiatives.

On Saturday, November 15th, on the premises of the Oratory of Saint Gerard, the historical work of Fr. Vincenzo La Mendola, titled p. Francesco Antonio de Paola, redentorista (1736-1814), profilo biografico dalle lettere [Fr. Francesco Antonio de Paola, Redemptorist (1736-1814), biographical letters], printed by Frusinate Publishers (Frosinone), and sponsored by the Province of Rome, was presented. The director of the Historical Institute, Fr. Adam Owczarski, presented the work of Fr. Vincenzo, in a comprehensive and interesting way, highlighting the method used, the sources consulted and the innovation of publishing previously unpublished documentary material, emphasizing the importance of finally having a first profile of one of the figures that marked the history of the C.Ss.R. in its first century of existence. The author was also asked for a deeper reflection on the relationship of Fr. de Paola with the city of Frosinone, which interested the more than one hundred participants in the cultural event. The provincial superior, Fr. Gianni Congiu, after welcoming and greeting the participants, moderated the proceedings. Representing the bishop of the Diocese of Frosinone-Veroli-Ferentino, was the vicar general, Msgr. Giovanni di Stefano, who in his speech stressed the historical and current importance of the Redemptorists’ presence in Frosinone and the bond between the local clergy and religious. The evening was enriched by the joyful and authoritative presence of the Most Rev. Fr. General, Michael Brehl, who reinforced the importance of having an historical awareness of such an important figure for the Redemptorists and the local church, offering new interpretations for the understanding of Fr. de Paola.

Among the participants was the provincial vicar of the Province of Warsaw, the provincial superior of the French Province, a representative of the Province of St. Clement, the secretary general and many confreres from the communities of the Roman Province, together with the students. The pastor of the cathedral of Frosinone and other local priests participated in the event along with a representative of the Passionist community of Ciociaria. Professors, researchers and scholars of local history made the evening more interesting with their speeches. The presentation concluded with the participants visiting the room of Fr. de Paula, which has been restored and returned to its original beauty by the diligent and hard work of restoration by Fr. Nicholas Fiscante and the confreres of the Frosinone house who have always kept the memory of de Paola alive. The guided tour ended in the historical library “St. Alphonsus” of which Fr. de Paola may be considered the founder.

The celebrations culminated in the solemn concelebration, presided by Most Reverend Fr. General in the Church of Our Lady of Grace in Frosinone on Sunday, November 16th, at 11:30 a.m., with more than twenty confreres and a fair number of the faithful who expressed their closeness to and their gratitude for the Redemptorists. The celebration was enlivened by the choir, which was led by Fabio Bracaglia and the Redemptorist students who made their valuable contribution in the liturgical service. In the homily, Fr. Michael reaffirmed that Fr. de Paola lived as a true missionary, at the service of the people and of the Congregation, using the talents received from the Lord and he urged those present to imitate his resourcefulness and courage. At the end of the celebration a document commemorating the event was read. It was signed by all the priests present, and will be preserved with the mortal remains of Fr. de Paola, which have found their final resting place under the altar of the Sacred Heart of Jesus in the Redemptorist church in Frosinone.