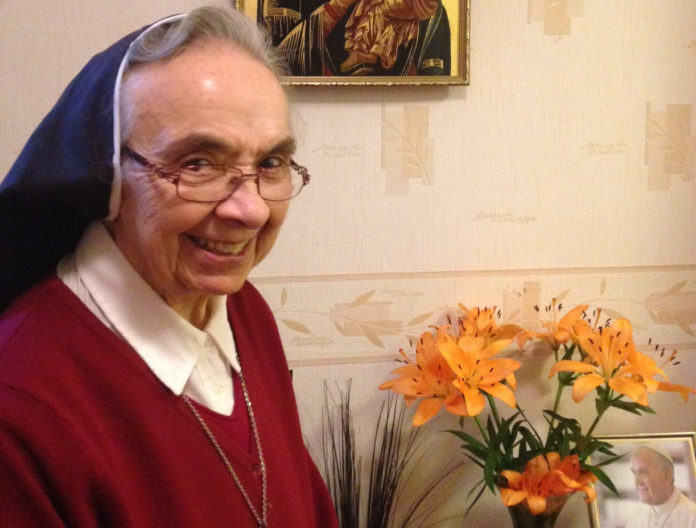 Sr Mary Bernadette OSsR, one of our enclosed Redemptoristine nuns, shares some of her fascinating story with us.

WHY DID I BECOME A NUN?

Two years ago I celebrated my Golden Jubilee of profession as a Redemptoristine Nun. A friend of a cousin of mine wanted to come to the celebration to see what someone who had been a nun for 50 years looked like! She was quite surprised to see I looked quite normal!

The Order of the Most Holy Redeemer (O.Ss.R.) is a contemplative Order which means that our main work is prayer. We were founded in 1731 by Sister Marie Celeste Crostarosa in Scala, Italy. She was helped by St. Alphonsus Liguori who founded the Redemptorist Fathers and Brothers in 1732. The two groups complement one another – the Fathers preach missions and Retreats, do a certain amount of publishing – books, pamphlets, leaflets etc. – and the Nuns pray for the success of their apostolic work.

What made me become one? Good question, because the last thing I wanted to be on leaving school was a nun, despite having been educated by nuns. When the second World War broke out in 1939, I had just started my secondary education. During that time my maternal grandmother died and then 18 months later by dear Father died. Two people I loved very much – so what was God playing at – taking them away from me. My Father’s death coincided with my starting my first job – a trainee draughtswoman in a huge engineering firm. They were very kind to me and on hearing of my father’s death and knowing I was the only wage earner at home, they doubled my wages from £1.17.6p a week to £3.17.6p a week – a huge help to my mother.

After 5 years in this job I realised there was no hope of promotion for a woman, so I went on to do secretarial work in an engineering agency in preparation for working as a newspaper reporter. All this time my interest in religion was declining (a rebel teenager though teenagers hadn’t been invented in the 1940s)and though I didn’t stop going to Mass I didn’t receive the sacraments as often as I should have done. Then I went to Lourdes!

It was the Holy Year of 1950 and I couldn’t afford to go to Rome but an auntie helped me to go to Lourdes. I went determined NOT to spend  the time in processions and services – I wanted to see something of France!! Need I say more? I am sure you can guess what happened. Our Lady, kind Mother that she is, took over and at the end of the 7 days I was loathe to leave. I realised I ought to be better and Our Lady obtained the grace for me to do it. I came back a very happy young woman -thanks be to God. I became a daily Communicant and said the Rosary every day and began to wonder where my life should now go.

On the pilgrimage there was a Redemptorist Father, who came as preacher. I had never heard of the Redemptorists before. He impressed me very much and was someone you instinctively called ‘Father’. After his early death – six weeks before he was due to come for my Final Profession – I realised what made him so special- but that’s another story.

On my return home, my Mother remarked that I looked different – immensely happy. Having had thoughts of doing things to make people happy I eventually realised that the one thing necessary is being at peace with God. So despite high ideas of acting, writing, playing musical instruments etc. I decided that becoming a contemplative nun, praying for the world and the people in it – was the way for me.

But which Order? One day while passing the C.T.S.Book Shop in Manchester I noticed in the window a book called ‘Marie Celeste Crostarosa and the Redemptoristines’. Wondering if it might have some connection with the Redemptorists I bought it, read it at one sitting and decided immediately – that’s for me!

The main work of the Sisters is prayer which includes first and foremost the Eucharistic Liturgy and the Liturgy of the Hours and private prayer. This of course means there has to be silence, solitude and mutual charity – hence the enclosure. The original rule stressed the need for daily intercessory prayer for souls, the Church and its leaders and those in civil authority. This prayer was spread throughout the week with a different group to be prayed for each day and included in the Thursday group were ‘unborn children – that their right to life may be respected’. Our red habits were to be a constant reminder of the blood shed for our Redemption by Jesus in His passion and death.

So I wrote to Father John and as the saying goes -‘the rest is history’. My youngest brother was doing his military service in Hong Kong so I waited until he returned and resumed his usual work and then on September 7tb 1954 I took a one way ticket to Devon.

Life in the convent was different and was not a bed of roses. There were hard times and there were lovely times and as I looked round the community of 26 Sisters I thought – if they have persevered, I’ll try to do the same with the help of God and Our Lady.

I am often asked if I have any regrets and my reply is always – ‘Not a single one’. I knew what I was doing, I prayed for perseverance and in 2006 I kept my Golden Jubilee of Profession. Now I am looking forward, if God spares me, to my Diamond in 2016. 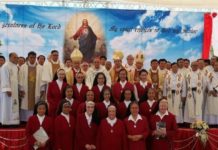 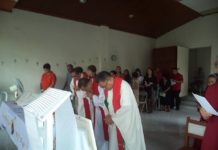 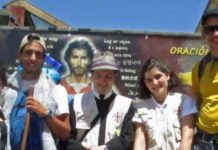