When Pope Pius IX was entrusting the ancient Icon of Our Mother of Perpetual Help to the Redemptorists in 1866, Muslim weavers of that era were creating a wall hanging with her image at an American-owned factory in the city of Kerman, in the southeast corner of Iran.

“It is interesting that more than 100 years ago, another culture honored and respected Our Mother of Perpetual Help and re-created the image as best they could,” explained an avid collector of fine weavings, who wishes to remain anonymous. He brought his priceless treasure to the Denver Provincial Office after he recognized Our Mother of Perpetual Help on the cover of the May 16-19 issue of Denver Catholic.

In fact, Islam reveres Mary – a human divinely appointed to bear Jesus in a virgin birth – above all other women. She is mentioned in the Koran 34 times, and an entire chapter is named after her. But Muslims don’t create images of religious figures, so the wall hanging this collector shared is a very rare piece of art.

The Muslim influence is evident. “Instead of including the angels, the weavers chose to incorporate a garden with trees, birds and flowers – a version of the Muslim heaven, or after-life,” he explained. “It is definitely a Byzantine image from that era of the Middle East, identified by very prominent eyes. The colors are spectacular, especially the red background, which is derived from a plant grown in that area of the Middle East.”

While the gold sandal falling off the Christ Child’s foot is generally interpreted as representative of divinity and his humility in taking on our humanity, the collector offered a different view. “As a little boy, Jesus was playing in the fields. He looked up into the sky and saw an image of himself on the cross being crucified. It scared him so much that he ran back to his mother as fast as he could, and jumped out of his sandal and into her arms,” he said. “Notice that Jesus is still looking up at the image in the sky, but Mary’s eyes are looking at a different place. God does not permit Mary to see the crucifixion.”

As a collector of Oriental rugs specializing in Armenian and Persian pictorial rugs for 15 years, he believes that he is very lucky to own the wall hanging. He found it at The Levant, a rug dealer in Oakland that has been in business since the 1920s.

“The current owner kept the piece in his private vault and would not show it to anyone he did not like,” he said. “I was lucky in that I was able to talk him into selling it to me. Actually, I literally had to beg him to sell it to me.” Lucky, indeed. 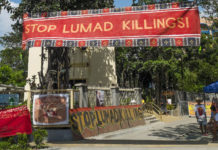 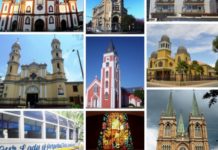 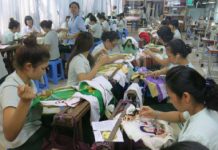