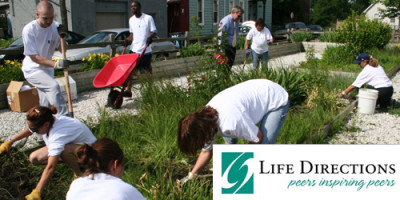 1973-1980 Life Directions was born out of the issue of violence. In 1973, Detroit was called the “Murder Capital” of the United States. On average one young adult was dying every twelve hours. The founders of Life Directions — Rev. John Phelps, C.Ss.R., Rev. Alex Steinmiller, C.P., Sister Rosalie Esquerra, O.P., and Alex and Judith MacDonald arrived at the intuitive understanding that it was necessary to “get to the cause of the violence.” The dynamic of “Peers Inspiring Peers through Forgiving” was forged through a series of neighborhood discussions directed at determining its root causes with people who were experiencing its effects.

Life Directions first response was to design the Focus Life Weekend for training and developing young adult peer leaders. The process centered on engaging the values that give direction to actions through forgiveness. The young adult leaders then entered into three public arenas — Neighborhoods, Public High Schools, and Churches — to awaken peers to be a part of the solution to the violence of their peers.

Father John Phelps is the President and C.E.O. of Life Directions, which he co-founded in 1973 with four other concerned Detroit citizens. Fr. Phelps was invited to bring Life Directions to Chicago in 1990. He is a Roman Catholic Priest, ordained in 1968, and belonging to a religious community of men called the Redemptorist Congregation. Fr. Phelps’ primary work is among young adults (13-35 years of age), with a priority on those on the verge of dropping out of school and into self-destructive life choices. He is especially focused on those who come from families below or near the poverty line.

Fr. Phelps has led hundreds of workshops in cities, colleges, and universities throughout the United States and abroad. Additionally, his work had led him to be highly sought after as a consultant on issues concerning at-risk youth. He has served with many various ecumenical organizations, church groups, corporations and educational institutions that are striving to place a priority on developing inclusive partnerships among people of diverse backgrounds and economic differences.

With Fr. Phelps’ leadership, Life Directions has been working for over 40 years to promote the powerful dynamic of Peers Inspiring Peers Through Forgiveness. Four core values drive the organization: