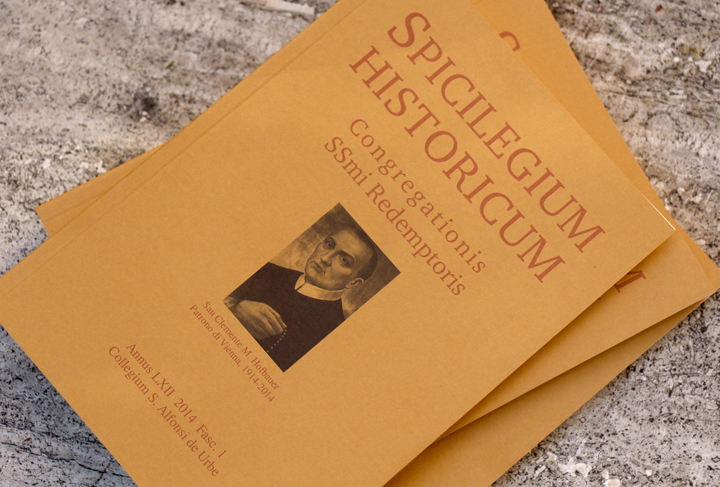 On February 2, 1953 the international historical journal, Spicilegium Historicum Congregationis Ssmi Redemptoris was launched by the then superior general of the Congregation, Most Rev. Fr. Leonard Buys, in order to publish the original, authoritative sources that had been carefully preserved in the archives of the Congregation and the various studies that commented on them. This new journal provided greater accessibility to these documents by Redemptorist historians around the world, and especially for the biographers of the Founding Father, Saint Alphonsus Liguori, and the other exemplary figures of our religious family. Five years earlier, on December 11, 1948, the same Fr. Buys had taken a first step in this direction, with the founding of the Redemptorist Historical Institute. These two decisions responded to the desire expressed by the XIV General Chapter of 1947 and the Congress of Redemptorist historians held in Rome in 1948.

In the presentation of the first issue the members of the editorial staff explained the scope of Spicilegium Historicum’s research in this way:

“It deals with the history of our Congregation, in a broad sense, including its origin and expansion through time and space; its mission and its apostolate in Catholic countries and among the pagans; its internal constitution, canonical and ascetical, that is, the historical description of its Rules, General Chapters and Constitutions, and the presentation of the particular character of the Institute, namely, its spirituality. It also includes the historical study of the life and work especially of our Father and Founder, St. Alphonsus Maria de Liguori, and of other distinguished members of the Institute who have had greater influence on its internal and external evolution. We do not exclude, however, the study of people not belonging to the Institute, nor the circumstances of time and place, which help us to understand what influence they had on the history of our Institute.”

Due to that same international character of the Congregation, preference was given first to the Latin language in the drafting of the contributions. In fact, in the first fifteen years (1953-1967), of the 274 articles contained in the three main sections of the journal (Studia, Documenta andCommunicationes), a good 141 were written in that language. Of the remainder, 80 were written in Italian, 31 in German, 12 in French, 8 in English and 2 in Spanish. From 1968 on the use Latin became more sporadic, to the benefit of the modern languages (Italian, German, English, Spanish, French and Portuguese).

Today Spicilegium Historicum has reached its 62nd year of publication. One can be sure that during this period, the journal has elucidated, with competence, the history of the Congregation in all its fundamental aspects and that the originally proposed objectives were achieved, especially with regard to the history of the beginnings of the Congregation (the foundation and consolidation in Italy during the 18thcentury) and its expansion beyond the Alps (in Europe and in the Americas during the 19th century). In addition, numerous articles raised awareness not only about the life and spirituality of the Founder, but also about his vision of missionary pastoral service to the people, for the poor and the marginalized. Even scholars interested in the life and spirituality of the Redemptorist saints: Gerard Majella, Clement Hofbauer, John Nepomucene Neumann, or the beatified of the Congregation, can find useful information for their research in Spicilegium Historicum.

It can also be argued that Spicilegium Historicum contributed much to the realization of the invitation made by the Second Vatican Council to religious Institutes and expressed in the constitution Perfectae Caritatis, to return to the roots and the original vision of the founders.

Currently, in Spicilegium Historicum, documents, studies, reviews, reports, bibliographic data, and more about the history of the Congregation are published in French, English, Italian, Portuguese, Spanish or German.