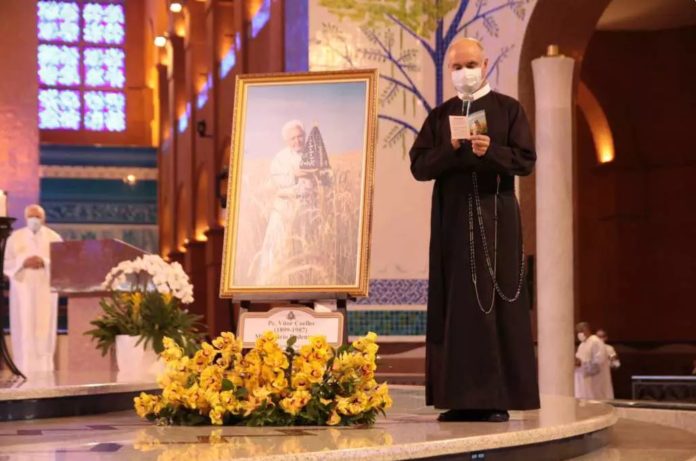 The National Sanctuary of Aparecida celebrated the 10th Pilgrimage in honor of Father Vítor Coelho de Almeida on 24th July. The celebration was presided over by Archbishop Orlando Brandes of Aparecida and concelebrated by the Vice-Postulator of the Cause of Beatification of Father Vítor, Father Anísio Tavares, C.Ss.R., and also in the presence of other Redemptorists and priests on a pilgrimage to the Casa da Mãe Aparecida on this day.

The tenth pilgrimage was held with the traditional triduum between the 21st and 23rd of July, always bringing a special theme each day to remember some aspect of the missionary’s life considered “Apostle of Aparecida.” As a general theme, the event wanted to draw attention to the missionary concerned with the proclamation of the Word. “Fr. Vítor Coelho, Missionary Disciple of Jesus Christ”.

Archbishop Orlando Brandes emphasized in his homily that Father Vítor was an enthusiastic disciple of the Word and that his ministry is for us today an invitation so that we know how to value Sacred Scripture more and more; an invitation that is also made by the entire Church in Brazil.

“Disciple of the Word Father Vítor taught not only once, but many times, the prayerful reading of the Bible, those four steps that our CNBB speaks so much and that we have not yet entered that path. Blessed be the God of Providence because in this year of 2021 the great CNBB motto for all the Brazilian people is this ‘House of the Word’, said Dom Orlando.

The archbishop also said that Padre Vítor, the “biblical man”, took great care of the Word of God, so much so that he worked for a long time in catechesis and when he preached, through Radio Aparecida, he brought many biblical texts for his reflections and even words from Greek and Hebrew to better explain the context and meanings of the readings.

Dom Orlando also recalled that the Sanctuary of Aparecida is concerned with the proclamation of the Word of God through the Journey with Bible,  the great project of evangelization and covering its facades, and that the call to Father Vítor’s life and ministry, especially in Aparecida makes us think and choose a Christianity that is increasingly rooted in the Word.

In closing, Dom Orlando spoke about the message that the pilgrimage and the life of the great Apostle of Aparecida leave us with the message on this day: “We have a lot to celebrate today, and Father Vítor leaves this message: that we are more biblical and enthusiastic about the Word of God”.

At the end of the Mass, Father Anísio Tavares expressed his gratitude to all who collaborated on these special days and asked the faithful to “take the testimony of Father Vítor Coelho to their homes, communities and pass on to the new generations that this man of God was and his importance for the missionary and outgoing Church”. He also said that the pilgrimage does not end on this day, but that our “commitment to spreading Father Vítor’s message and also praying for his beatification” begins.

Review – On the Redemptorist Missionaries Youtube Channel you will find all the homilies of the pilgrimage, which each day had the presence of a Redemptorist missionary to exalt an aspect of Father Vítor’s life and ministry.

Biography of Padre Vítor – Also visit A12.com/padrevitor and learn about the history and ministry, as well as the Campaign carried out for the Cause of Beatification and the means for communicating some grace achieved through the intercession of the Servant of God Fr. Vítor Coelho de Almeida.

Prayer for the beatification of Father Vítor Coelho de Almeida

God, Father of goodness and mercy, who granted Father Vítor Coelho the gift of announcing the Word of Salvation with pity and anointing.

Grant me the grace to follow your example of faith and trust in the mercy of God and in the intercession of Mary, your Mother, to obtain my personal conversion.

I ask, O Holy Trinity, through the intercession of Our Lady Aparecida, for the beatification of your faithful servant, Father Vítor Coelho, for your greater honor and glory.

I also ask you, with deep faith and trust, to grant me, through the intercession of Our Lady Aparecida and her servant, Father Vítor Coelho, the particular grace I need (mention the desired grace).

Through Jesus Christ, Our Lord. Amen.

at the end, pray three Glories to the Father and a Hail Mary.​​