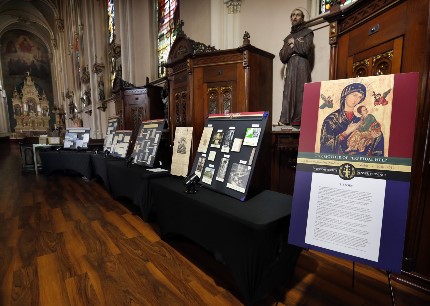 (Chicago, september 2016) – Our Mother of Perpetual Help, an icon of Mary, has been taken around the world by Redemptorists, and the faithful have always prayed to her to answer their particular needs.

Now, in Chicago, the Redemptorists at St. Michael Parish, 1633 N. Cleveland St., are asking for the intercession of Our Mother of Perpetual Help in praying for peace on the streets of Chicago and elsewhere, said Redemptorist Father Ted Lawson, pastor of St. Michael.

The parish will hold a service Sept. 7 at 7 p.m. to pray for an end to all forms of violence and to promote justice and peace, Lawson said. At that service, the parish will display the icon of Our Mother of Perpetual Help that it received from the Redemptorists in Rome in 1870.

That icon was one of the first four sent to the United States. It survived the Great Chicago Fire in 1871, when parishioners rescued it in advance of the flames and took it farther north. While the interior of the church was destroyed in the fire, the walls remained standing and the icon returned when the church was re-opened in 1873.

“It’s not something we have on display all the time because of its value,” Lawson explained. “But it will be there for the prayer service.

Another, newer handmade copy of the icon usually occupies the parish’s shrine to Our Mother of Perpetual Help. The shrine itself was part of the World’s Columbian Exposition in Chicago in 1893. 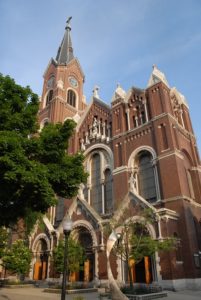 People in Chicago can see eight interpretations of the icon from various parts of the world between Aug. 28 and Sept. 11, when St. Michael is hosting a traveling exhibit about the icon and its history and meaning. It’s the first stop for the exhibit, which will make its way through various parishes and institutions administered by the Redemptorists’ Denver Province between now and July 2017.

The tour is part of the third phase of the order’s celebration of the 150th anniversary of having the original icon, housed at St. Alphonsus Church in Rome, entrusted to them. While the first phase focused on preparation and the second on celebration of the icon among Redemptorists, the third phase is based on Pope Pius IX’s mandate to the Redemptorists when he gave them the icon: “Make her known.”

That mandate came in 1866, when, according to information provided by the international Redemptorist community, Pope Pius IX asked that the original icon be cared for by to Redemptorists, who had built St. Alphonsus Church on the site of the former St. Matthew Church, which was administered by Irish Augustinians before being destroyed in a war in 1798.

That was one of many moves for the icon, which is believed to have been created in Crete by an unknown artist. 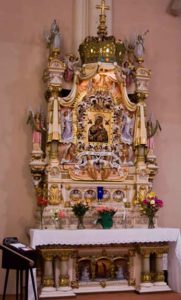 According to a tradition that dates to the 16th century, it was stolen from there by merchant who brought it to Rome and kept it in his home, where it stayed until after he died. Then the Virgin Mary appeared to his 6-year-old daughter and asked her to tell her mother and grandmother that the icon should be placed in St. Matthew Church, which was directly between the basilicas of St. Mary Major and St. John Lateran.

The mother and grandmother did as the little girl asked, and the icon remained there until the end of the 18th century. According to the Redemptorists, the Augustinians had saved it and it was in the upstairs chapel at St. Mary Church in Posterula, all but unknown.

When the Redemptorists ended up building St. Alphonsus Church, they received word of the icon that once had been at St. Matthew’s, and learned about its location from a Redemptorist priest who once had been an altar boy at St. Mary Church in Posterula.

To that end, Pope Francis blessed 12 missionary copies of the icon that are to be sent around the world this year. One of them will be part of the exhibit at St. Michael.

“The icon has been taken all over the world and been adapted to what the people needed,” Lawson said. “It has embraced the needs of the culture wherever it was. I want to renew it for the culture of the 21st century in Chicago. What we need here, now, is her intercession to pray for peace.”

Lawson said he sees the icon — an image of Mary holding the child Jesus with smaller images of the Archangel Gabriel and the Archangel Michael over her shoulders — as “a window into the Gospel. You simply gaze upon it and simply observe and let it soak in, and it speaks to you.”

Lawson said he hopes that the icon can bring people to their own personal conversions that will be necessary to bring peace in the city and in the world.

“Unless we begin with a personal conversion, and then a communal conversion in our faith, I don’t believe much can be accomplished,” he said. “Our effort to end violence and promote peace is very much about basic Gospel values.”

By Michelle Martin in http://www.catholicnewworld.com/