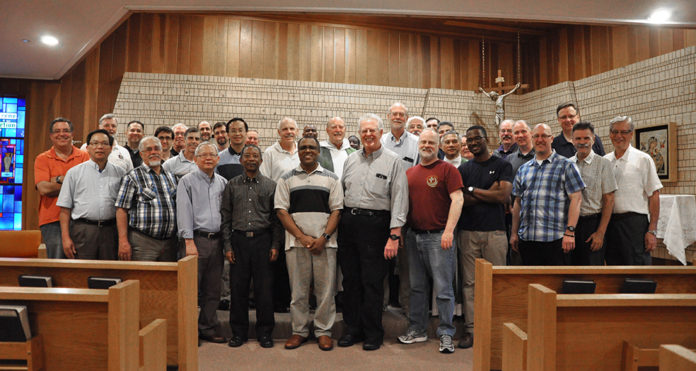 The Conference Assembly for North America took place September 19-23, 2016 at the Redemptorist Retreat House in Oconomowoc, WI, and was hosted by the Denver Province.

Each Unit in the Conference, as well as the Coordinator, gave a quick summary of their current situation.  This information was used to update the Conference Assembly Agenda.

The following statement was passed at the Assembly: “The Conference of Redemptorists of North America will initiate a Common Theologate at the Oblate School of Theology in the Fall of 2017.” This decision must now be discussed and voted on by each Unit’s EPC.  A working document of the Theologate Ratio was reviewed.

In light of the above statement the Board of Provincials met to begin outlining the tasks that must be done in order for the transition to the Oblate School of Theology to take place.  Issues such as EPC approvals, finding a residence, appointing formators, creating financial agreements and continued work on the Ratio.

Jeffery Rolle, C.Ss.R., the General Consultor, spoke about issues within the Congregation and preparations for the General Chapter.  The transfer of the OLPH icon to various communities over the next year was discussed.

The Assembly discussed the Conference Level Apostolic Priorities and appointed a Committee to work on a draft for the next Conference Assembly. (Remi Hebert, C.Ss.R.; Dominic Long, C.Ss.R.; Jeffrey Rolle, C.Ss.R.; and John Kingsbury, C.Ss.R.)

Canada:  The Canadian Restructuring timeline and tasks to be accomplished before the end of the Quadrennium was discussed.  Various models of restructuring are being reviewed and will be presented to the confreres of each Province.

Baltimore & Caribbean: The restructuring of the Caribbean Region will be discussed at the upcoming Baltimore Province Chapter as well as the future Caribbean Assembly.

Denver & Extra-Patriam:  The Denver Province and the Extra-Patriam Vice Province created a Committee to discuss ways for more dialogue between these two Units and some possible joint Apostolic initiatives.

The various levels of Formation were discussed from a Conference perspective. A Conference Level Formation Ratio will be developed.

Secretariat for Partners in Mission:

The next Conference Assembly is scheduled to take place October 2-6, 2016 at the San Alfonso Retreat House in West End, NJ.