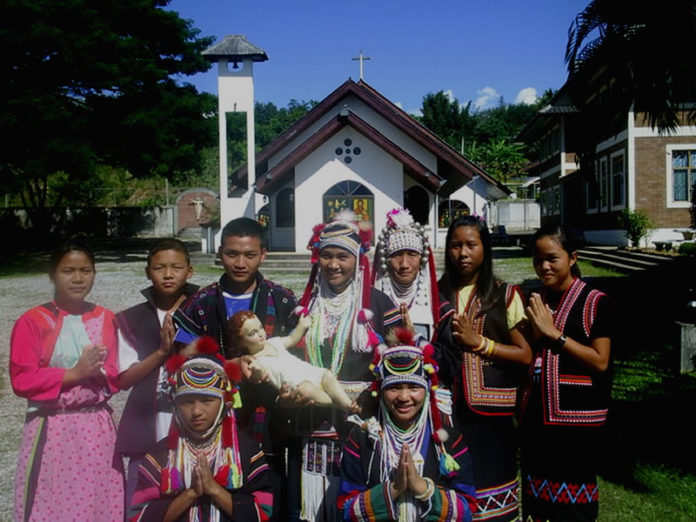 In Thailand, Redemptorists have provided for the Hmong, Karen and Akha people in four pastoral areas in Chiang Mai diocese, home of many hill tribes.

For 15 days in December, Father Berm Chakrit, a Hmong Redemptorist priest from Thailand, offered Masses, heard confessions, celebrated a baptism and anointed the sick for members of the Twin Cities’ Catholic Hmong community. The seemingly routine actions were anything but; Hmong-American Catholics rarely have the opportunity to receive the sacraments from a priest who speaks their language.

For some local Hmong Catholics, conversing with a priest in Hmong is a pleasure, but for others — especially the community’s elders ­— it’s a necessity, as they do not know enough English to confess their sins and may go years without an opportunity for the sacrament of reconciliation.

“They have many things they want to share [with a priest], but cannot share” because of the language barrier, Father Chakrit said Dec. 29, hours before leaving St. Paul to spend the New Year holiday with Hmong Catholics in Milwaukee. In August, he began a sabbatical with other Redemptorists in Chicago and spent the weekends with Hmong Catholics in Milwaukee, Green Bay and Warsaw, Wisconsin, and Raleigh, North Carolina. He left the U.S. Jan. 8 to return to his parish in Thailand.

Ordained 10 years ago, Father Chakrit, 42, said he is one of just two Hmong-speaking priests in the world who can travel to the United States. The other lives in France. Ten Hmong-speaking priests live in China and one lives in Laos, but they cannot easily leave their countries. A newly ordained Hmong priest lives in Thailand, but he only speaks Thai.

Since his ordination in 2006, Father Chakrit has traveled to the U.S. every couple of years to minister to Hmong Catholics, typically timing trips with the biennial conference of the St. Paul-based Hmong American National Catholic Association, which sponsors his travel.

He feels a responsibility to minister to Hmong Catholics in the United States, but its weight isn’t a burden, he said. Rather, he said, it brings him joy.

“When I talk to them, they are very interested in what I [say],” he said. “They understand me because I am preaching and teaching in their language, in their culture. It seems to go deep for their spiritual[ity], in their heart. … I’m really happy [that] I do that for them.”

Hearing a priest preach and pray in their own language has a special impact even for the Hmong Catholics who speak English, he added.

“They are like the sheep with no shepherds,” he said. “So I say, ‘Yes, I am here, and I’m ready to go to all of their houses if I can bring you close to God.’”

A few local priests — including Father Jonathan Kelly, a formator at St. John Vianney College Seminary in St. Paul who assists at St. Vincent de Paul — have learned to celebrate Mass in the language, but they can’t speak it conversationally, meaning they also can’t understand it well enough to hear confessions.

“They really can’t go to confession in Hmong to somebody who can understand them. That’s one of the most difficult things for the community here,” he said.

Father Chakrit heard about 20 confessions during his first visit to Minneapolis and St. Paul in October, and about 25 confessions during his extended stay in December, he said. Most penitents didn’t speak English; the community’s leaders encouraged English-speakers to confess elsewhere in order to free Father Chakrit’s time for Hmong-only speakers.

Canon law does make a provision for people in the Hmong elders’ situation, allowing a person who cannot find a confessor in his or her own language to confess via an interpretor.

While visiting the Twin Cities, Father Chakrit visited and blessed many Hmong Catholics’ homes, including that of a family of 10 in Minneapolis who are joining the Catholic Church. Because Hmong people traditionally practice animism, or a belief system that attaches spiritual qualities to objects, places and creatures, new converts’ homes in particular need to be purified and blessed, explained Kou Ly, a parishioner of St. Patrick who hosted Father Chakrit during his stay.

The priest also ministered at St. Casimir in St. Paul to a small Catholic Karen community, whose origins are in Myanmar and Thailand. In Thailand, he serves a Karen parish.

Ly said that having a Hmong-speaking priest, even for a brief time, brings him a sense of joy.

“You feel closer to your prayer, because this is what you grew up with,” he said.

He said the language barrier makes it hard for the Hmong elders in the U.S. to be Catholic. They don’t understand homilies given in English, and when attending Mass in English, they don’t chant, which is central to the Mass celebration in Hmong. It makes them feel like they can’t fully participate in the liturgy, Ly said.

In the 1980s, Father Daniel Talliez, a French-born, Hmong-speaking Missionary Oblate of Mary Immaculate, served the local Hmong community, but he left in 2001 to minister in Thailand. Because of the language barrier that’s existed since, some Hmong Catholics have left the Church, with some joining local Protestant churches with Hmong pastors, Ly said. It’s a common misconception within the Hmong community that all Christian denominations are the same, he said, which underscores the need for a priest and Catholic formation.

St. Vincent de Paul is served by a Hmong permanent deacon, Deacon Nao Kao Yang. Still, Ly, 48, sees a need for Hmong priests and is proud that his uncle, 33-year-old Peter Ly, will be ordained a transitional deacon for the archdiocese in May and hopes to be ordained a priest in 2018.

The dearth of Hmong vocations doesn’t surprise Ly, however. For the Hmong people, “our faith is pretty new,” he said.

A missionary priest brought the faith to the Hmong people in the 1950s. During Laos’ civil war and eventual governmental fall in 1975, many Hmong fled to Thailand and lived in refugee camps, where Catholicism flourished with the help of Hmong catechists. Ly was born in Laos but lived for three years as a child in a refugee camp, where he learned the faith.

Ly made his way to the U.S. via France and French Guiana, arriving in 1992. He lives in Lake Elmo and works as a database analyst for the Minnesota Attorney General’s Office. He and his wife, Joua, have five children, ages 5 to 23.

Father Chakrit’s family is from Laos, but they didn’t encounter Catholicism until he was a boy. A Redemptorist missionary priest visited his village and ushered his family into the Church when he was 10, but young Berm didn’t understand the appeal of Christianity.

“I just understood that Jesus was a foreigner for me,” he said. “My father tried to teach me to pray the Our Father, the Hail Mary, but I wasn’t interested.”

He became fascinated with Buddha and he told his parents he wanted to become a Buddhist hermit monk. His father tried to convert him, but wasn’t successful until one night, when the two were outside looking at the stars, and his father taught him the “Holy, Holy, Holy.” With that prayer, Father Chakrit had a deep sense of God as creator of the universe, and that became his personal daily prayer.

With the help of that Redemptorist missionary, he finished his education at a center for Hmong Catholic children, and he decided to pursue the priesthood. He studied philosophy in Thailand and theology in the Philippines.

After ordination, he expected to be assigned to a Hmong community, but instead he was sent to minister in a Karen village. At first he celebrated the Mass in Thai, but then realized that it would be more effective for him to learn their language and adopt their cultural habits, which he did. He now oversees a Karen center for youth, which is similar to the Hmong center where he received an education.

He said he was glad to be retuning to his parish in Thailand, but looked forward to returning to Minnesota in the future to further minister to Hmong Catholics.

“I feel I’m always ready,” he said. Wherever the Hmong “need the good news, I will be there. … I will try to do the best for them.”