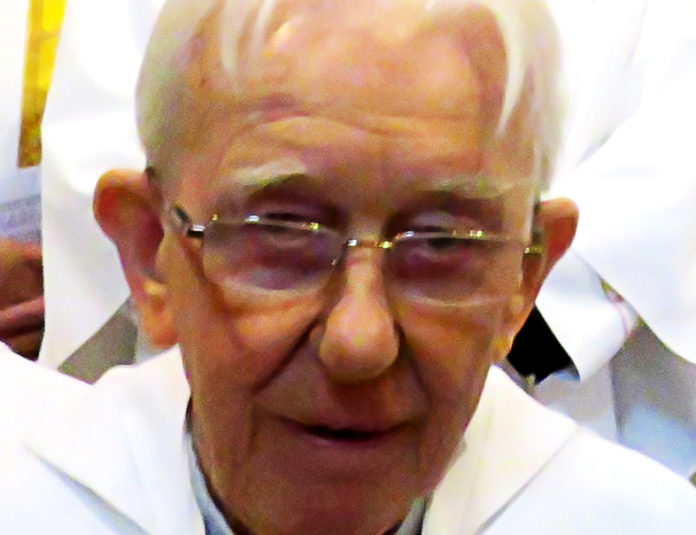 (Liverpool, United Kingdom) Yes, I’m back, although I don’t know for how long. I left Bishop Eton and checked in to the Royal Liverpool Hospital at 7.30am on the 18th July 2016. A few days previously I had visited my brother in Glasgow to assure him that there was nothing to worry about and to avoid my never seeing him again if things did go wrong. I didn’t think they would, but when the patient is 82 years old and the surgery is of the car crash variety, there is room for doubt. But when I was told I had between six and nine months to live and surgery was proposed as my best chance of a cure, I was all for it. My mind was in “bring it on” mode.

I was wheeled into the operating theatre. I had been there before and so was pretty relaxed. It was a matter of breathing deeply and drifting off, for an indeterminate period of time, to a happy place, from thence to be awakened by the kindly voice of a Filipino nurse purring in my ear: “James how are you?”. At least that is how it happened in the past. This time it was different. I have no recollection of ever awakening from that general anaesthetic or being coaxed out of sleep by some kindly nurse. No, I was locked, it seemed, in another world, in a very unhappy place, a dark place populated by drug addicts, gun runners, kidnappers—me being one of the kidnapped with no possibility of ever being ransomed. You see, I was being moved from one dank window- less place to another. There was no way I would ever be traced.

Mind you, I did resist, especially when I came to believe that my cancer was a fiction and that I and other elderly folk had been conned into the hospital for experimental purposes. I fought back physically. I remember the struggle as they tied me down and I resisted with all my might. Months later when I was back here in Bishop Eton a parishioner told me her daughter, a nurse at the Royal, had been involved in one of my battles against the powers of evil, i.e. half-a-dozen nursing staff. Apparently, I called the lady’s daughter a witch. Considering the state of mind I was in, or out of, at the time, she got off lightly!

Let me tell you that my operation for oesophageal cancer was carried out successfully. What set me back and laid me low was a sudden post- operational infection. While I hallucinated and raved, the doctors, nurses and staff of the Royal worked hard to keep me alive and did so with awe- some good will. Such was my mental and physical state that several weeks passed before I was fully aware of where I was and what was going on around me. And it was then that I b e ga n to stand still. Days be cam e interminable; I lay there and prayed that they would end, but they wouldn’t!

Nights were equally obstinate; there was no way they were going to give way to the days. I must confess that as I lay there, I languished — oh how I languished. You see, if there was no way the days were going to give way to the nights and vice versa, life would be at a standstill and I’d be lying there for- ever, a forlorn old creature hooked up to feeding tubes and electric wires, hoping there would be a power-cut.

And talking of prayer, my advice to those preparing to go into hospital is: pray be- fore you get there! This I learned years ago when I was seriously ill in Rome. I was suffering from a bacterium capable of killing me and I never said a prayer—I couldn’t. For the past sixty years as a religious and priest, I’ve been more than happy to pray several times a day. I’ve studied prayer and lectured on prayer, but that has been no help when sickness was draining the life out of me. During my stay in the Royal, I doubt that I ever managed to finish a Hail Mary. But, thank God, a phalanx of folk was doing the praying for me. What’s more, I was inundated with “holy” cards wishing me well and assuring me that, not one Mass, but novenas of Masse s were being offered for my return to good health. There were so many of those multiple Mass cards that the Masses promised are probably still being said — even now. If I suffer a relapse, I’m probably still covered!

I was all of six weeks in the Royal. As time passed and I became a bit (but not much) brighter and more aware of life around me, I continued to languish. Who could blame me? I was, without warning, introduced to hospital food. Enough! I’ll only upset myself if I say more. I remembered the mouth-watering menus I was presented with when in hospital in Rome. I remembered, too, how we were asked to indicate whether we wanted red or white wine to accompany our meals. To tell the truth, I wanted neither red wine nor white wine. There was only one thing I wanted and that was OUT. Like the big child I am, I wanted to go home to our beloved Bishop Eton—yes, to the building, but more importantly to the community that gives life and purpose to the building. Waiting for the day of deliverance/homecoming was any- thing but easy.

What eased the pain of waiting were the constant visits to the Royal of the differ- ent members of our community. Not a day passed without a visit from at least one member of the community. Often, they arrived in threes and fours, helping each other along, and in danger of being mistakenly admitted. This kindness continued during my immediate convalescence at Christopher Grange and has continued to this day here in Bishop Eton, where our home-grown paramedics still attend to my daily techno– medical needs.

I’m back home again, and I’m ever so grateful for all that has been done for me. During my illness, I did live through some dark, even frightening, times, but despair was never an option. There were too many on my side. We were a power to be reckoned with. As we lived through this experience, grace, normally thought of as a theological truth, became a lived reality—became words of encouragement, a warm embrace, little acts of service, a willingness to wait and watch and listen and love. We were a grace-fuelled community and we were winners. As they say daftly on television these days: ‘Why don’t we all give our- selves a big round of applause?’