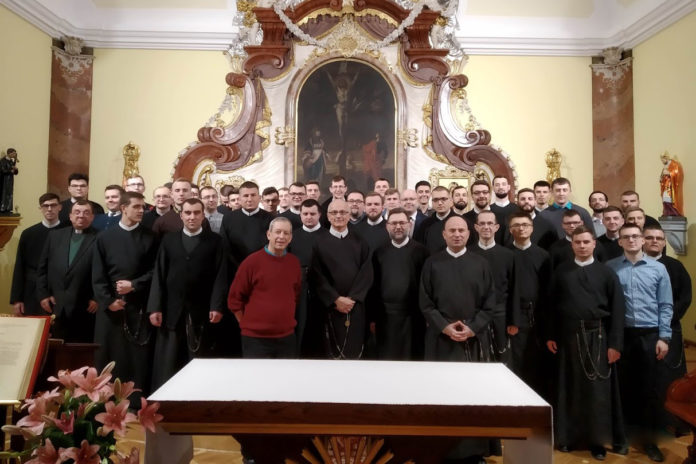 (Poland) Father General, Michael Brehl, C.Ss.R., and I, Father Manuel Rodríguez, C.Ss.R., the Secretary of the General Secretariat of Formation, visited the Warsaw Province from Thursday, February 14th until the 17th, 2019, principally for the sake of interchange with the formators and students of the Province. 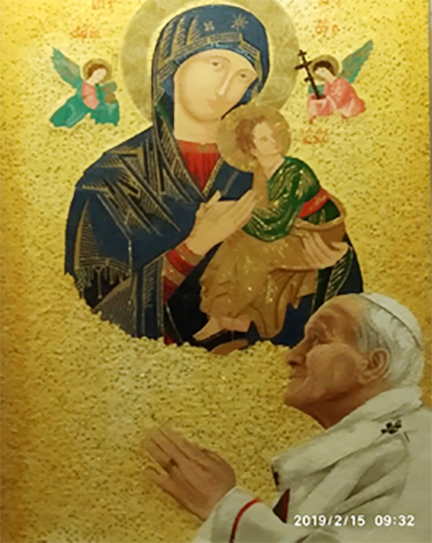 Fathers Brehl and Rodríguez stayed in Krakow the first night and were able, before continuing to the Province Novitiate in Lubaszowa, to visit the Shrine of St. John Paul II.  It was Fr. Manuel´s first visit to Poland and he, as with many other visitors, was impressed by the aesthetic beauty of this modern tribute to Saint John Paul II.  The harmonious balance between the many beautiful mosaics and the cement structure and columns was done in a very tasteful and beautiful way.  Perhaps prejudiced, but the mosaic of Our Mother of Perpetual Help and St. John Paul II, is certainly among the most artistic and beautiful mosaics in this and in many other places of worship around the world.  John Paul II, as a young man, would visit the nearby shine of Perpetual Help serviced by the Redemptorist and receive the Sacrament of Reconciliation.

The visit to the interprovincial novitiate in Lubaszowa gave an opportunity to get to know the community and share with the seven novices and respond to their many questions about the Congregation, its history, its mission and formation within the Congregation. 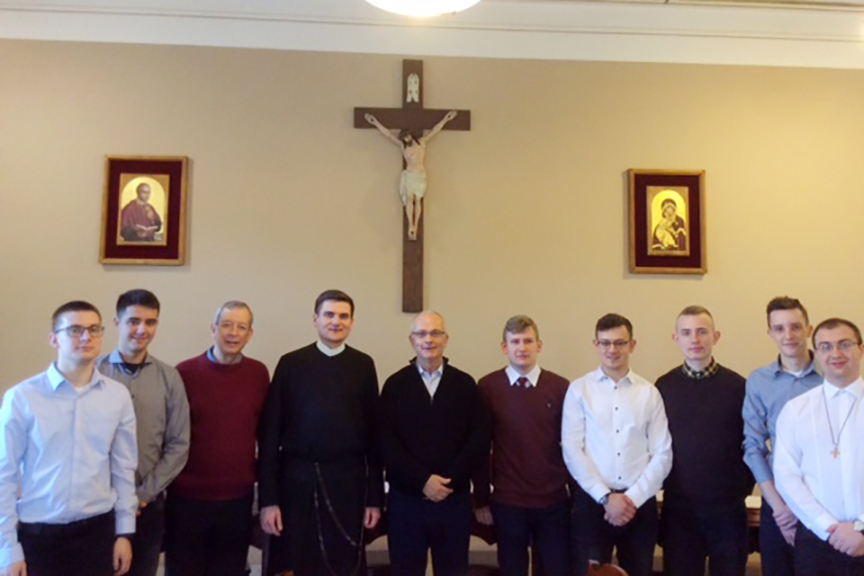 The rest of the visit that is from the remainder of Friday until Sunday, the visitors had the opportunity to share several beautifully prepared liturgies (Liturgies of the Office, Eucharist, Youth Vigil) in Tuchów. The youth vigil was especially impressive as the Church permitted only standing room for the many young people present.  Although parts of the Eucharists and of the Virgil were celebrated in English, with simultaneous translation into Polish, one noticed how the youth thoroughly enjoyed being part of the services.  Many, if not fluent in English, take the study very seriously of this and other languages.

Besides the scheduled and fraternal Gaudeamus, which can never be overlooked when Redemptorists gather, the Seminary hosted three main encounters for Frs. Brehl and Rodríguez.  One encounter was a meeting of the Scientific and Pedagogical Council of the Seminary.  As one listened to the programs, evaluation, and projections, one had to be impressed by the professionalism and quality of this Institute and the quality academic formative response by our Redemptorist students. 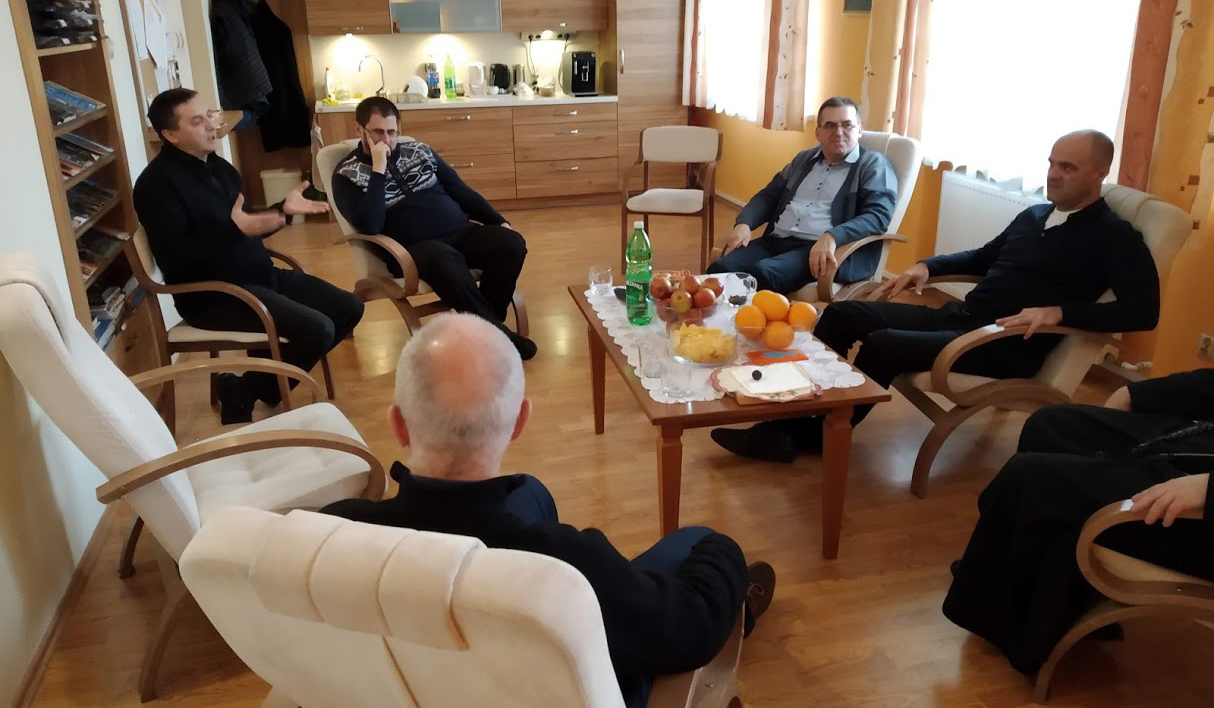 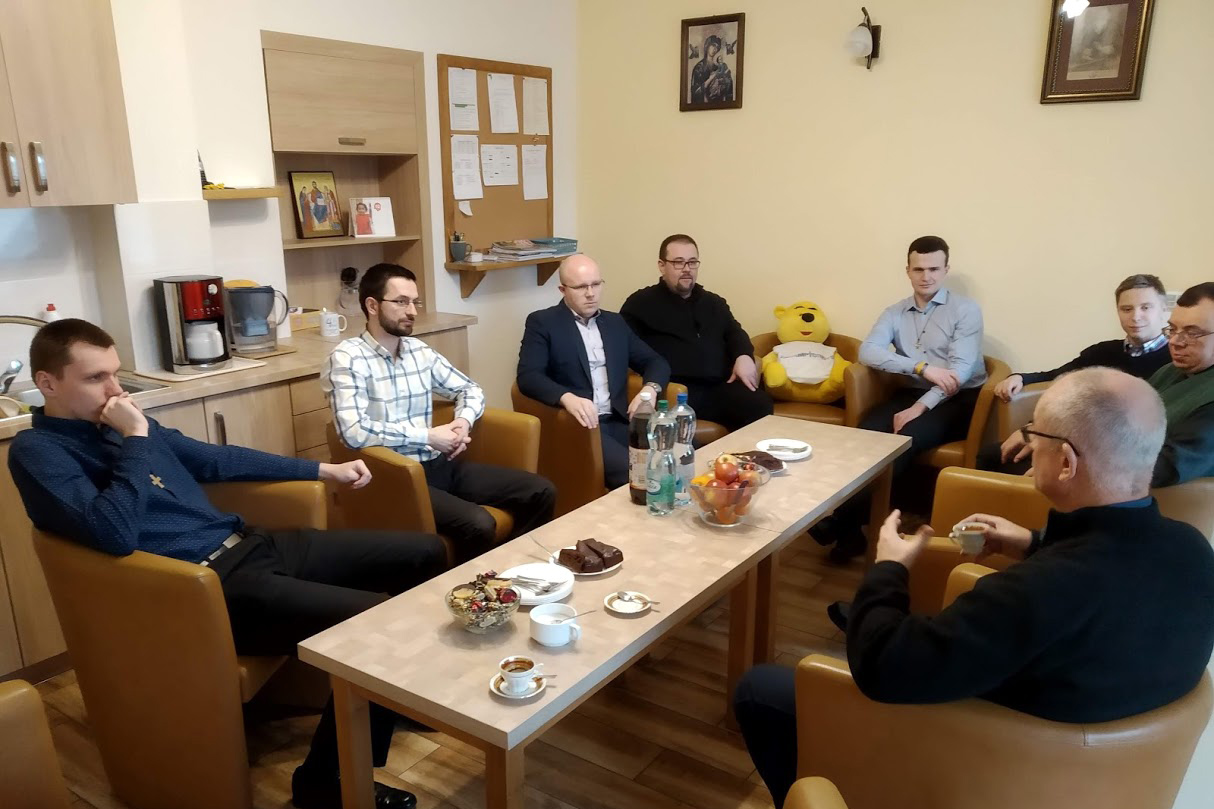 An encounter with the 54 students from all the levels of formation, that is, the postulants to those in their fifth year (including again the seven novices), was especially impressive as the visitors captured the enthusiasm of the students by their question and comments ranging from questions about the restructuring in the Congregation and the response of formation to the Conference´s Apostolic Plan to the consciousness of the following the Redeemer in the proclamation of the Good News to the abandoned poor and the wounded of our world.  There is no doubt as to the faithfulness of the formators in their task of communicating to the students all that is happening in the today of our Congregational life and mission.  Also, the formation of the Redemptorist identity is an outstanding characteristic of the formation system of the Warsaw Province.

The final meeting was with the formators of the Province.  An atmosphere of open and free dialogue, especially with regards to restructuring, and formation in the Warsaw Province was enriching as it was a fraternal experience of active listening by all, even as expressions of doubts were openly presented.  Some of the topics for discussion were easily resolved, for example, the celebration of the Day of Prayer for Vocations, while others like, secularism and how it creeps into our religious community life, the pastoral year, the length of time of the postulancy program and some confusion regarding terminology, obviously merit more listening and dialogue.  There was a feeling that even if there were some lapses in process and communication, the rhythm of vitalization of our formation system as a Congregation in a changing and somewhat complex time, is moving forward.

Finally, the testimony of missionary life of the older and sicklier confreres who reside in Tuchów is an inspiration and edification to not only the students but to all who live in and visit the Seminary.

A special thanks to Father Provincial, Father Janusz Sok, C.Ss.R., the communities, the rectors, the formators and the students for their warm hospitality and the sharing of their lives.

Fathers Brehl, as Superior General who has visited many times the Warsaw Province in the last ten years, and Father Rodríguez evaluated the visit as very positive.  For Father Rodríguez this first-hand experience of formation structures in the Province of Warsaw, one of the largest in our beloved Congregation, was a breath of fresh air and a promise of the Redeemer´s blessings as we continue to respond faithfully, in the spirit of conversion, restructuring, and reconfiguration, to the signs of the times and the inspirations of the Holy Spirit for the future of our beloved Congregation.