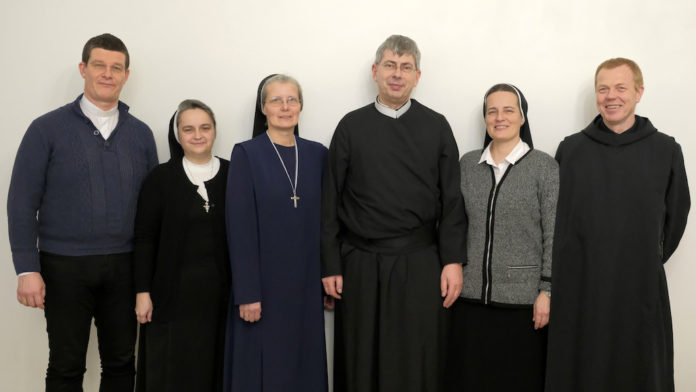 (Bratislava, Slovakia) The first Meeting of the Assembly of Members so called the Conference of Major Superiors of Slovakia (Konferencia vyšších rehoľných predstavených, in Slovak  KVRPS) took place on 30th January 2019 in the Salvator Center in Bratislava. Religious from different communities operating in Slovakia chose their new leadership and approved the documents related to the workings of the Conference as well as its organizational structure.

The Conference is made up of 76 members from 73 Religious Institutes (45 of women and 28 of men). All total 63 members were present, and they chose a new Executive Committee for a three-year period. Father Václav Hypius CSsR is elected as the President of the KVRPS and  Sister Petra Sičákova SSNPM as the First Vice-president. The following members of the Executive Committee were also elected: Fr. Ambróz Martin Štrbák OPraem, Sr. Rafaela Zvrškovcová OSF, Sr. Agnesa Jenčíková CJ and Fr. Vladimír Kasan OSB. Sr. Jana Kurkinová FMA was elected as the General Secretary of the Conference, and Sr. Marta Chraščová CSSsS as the Assistant Secretary and Treasurer.

The Holy Mass was presided by Mons. Jozef Haľko, Auxiliary Bishop of Bratislava, who began by invoking the Holy Spirit. In his homily, he drew attention to the fertile soil from the Gospel and recalled the well-known prayer of a famous Slovak Religious, Fr. Aquinas Gabura OP: ‘Lord, give us our original religious zeal!’ The  Greek Catholic Bishop, Milan Chautur CSsR, Chairman of The Committee for Institutes of Consecrated Life and Societies of Apostolic Life of KBS (Slovak Conference of Catholic Bishops) sent the participants a letter of greeting in which he wrote: ‘May your union be a sign of unity in a divided world. May this unity of consecrated people bring about a multiplication of forces for more intensive action of individual Orders, Congregations and Institutes in Slovakia.’