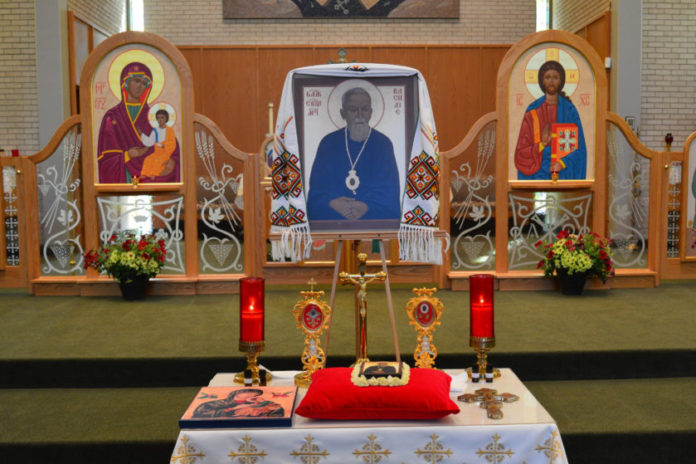 (Winnipeg, Canada) Recently I was asked why Blessed Vasyl’s holy relics were here in Winnipeg and not in Ukraine. On the one hand, it would make sense since he is from Ukraine that his holy relics should be returned there. However, perhaps God had a deeper plan, as the author of the Letter to the Hebrews says, “a plan which included us.” (Heb. 11:40)

Blessed Vasyl spent only his last year of life in Canada. When he was released from his second imprisonment in eastern Ukraine by the Soviets on January 27, 1972, he was already a marked man. During his last imprisonment, he was administered deadly slow-working drugs that would lead to this imminent death. He was then exiled from his native land quite sick and weak. Upon arrival at his sister Vera’s in Yugoslavia, his nephew Dr. Vasyl Nikolic began nursing him back to relative health. Shortly after, he travelled to Rome to meet with Pope Paul VI to relay information about the underground church in Ukraine. Since he had relatives in Winnipeg and Metropolitan Maxin Hermaniuk, a fellow Redemptorist, knew him well, he was invited to come and live in Canada. In Winnipeg his Cousin Maria’s husband Dr. Zenon Matwichuk took personal care of him. Doctors attested to Blessed Vasy’s poor condition and health. Just a little more than a year after his arrival in Canada, he fell asleep in the Lord on June 30, 1973. It was determined that his death was the result of the poisonous drugs received during his last imprisonment in Kommunarsk. In 2001, he was proclaimed a martyr for the faith by Pope John Paul II. After his beatification his holy fully intact (incorrupt) body was transferred to St. Joseph’s Ukrainian Catholic Church, a Redemptorist Parish.

Did God have a deeper plan in bringing this martyr to Winnipeg, to Canada, to North America? I believe He did.  We are living in a part of the world where the Christian faith, once strong and being the guiding principle in life, has now eroded to mere lip service. Our Christian values are constantly being watered down and compromised. The value and respect for human life has decreased where we can legalize and allow abortions and practice euthanasia. The sanctity of Christian marriage has been distorted where society no longer views it as a holy union between a man and a woman. Christian symbols are being forbidden to be worn in public. Truth has become relative and is twisted to serve selfish needs. Blatant lying and distortion of facts have become the protocol of political leaders. The primacy of God, our faith in Him, the following of His commandments are all under attack. I believe that God has given us the witness of a martyr to inspire us and to give us the courage to stand firm in our faith and beliefs.

Blessed Vasyl’s martyrdom was not just a single act in his life. It was a life-long journey of faithfulness to our Lord, to the Eucharist, and to the Mother of God. He had many opportunities to compromise his faith, rationalize decisions to adhere to the command of the Soviet government, but he didn’t. Despite severe consequences, he remains faithful to God, not only secretly but even openly. He never stopped celebrating the Divine Liturgy, hearing confessions, giving religious conferences, organizing monastic life, promoting religious literature and materials, even though all these things were strictly forbidden and punishable with imprisonment and even death. Blessed Vasyl proclaimed the Truth even when it was “not in reason.” As the letter to the Hebrews says: “he wished to be ill-treated along with God’s people rather than enjoy the fleeting rewards of sin.” (11:25)

Blessed Vasyl remained faithful to the end and now has been given the role and ministry of being a great intercessor for us all. His Shrine has become a fountain of blessings and graces. He brings our prayers to the throne of Kind and obtains blessings and graces for all those who ask through him. May the witnesses of Blessed Vasyl help us to embrace “martyrdom” for the Christian faith in all the many forms it takes. May we too remain faithful in this world of confused values and beliefs.

Ukrainian Redemptorists of the Yorkton Province