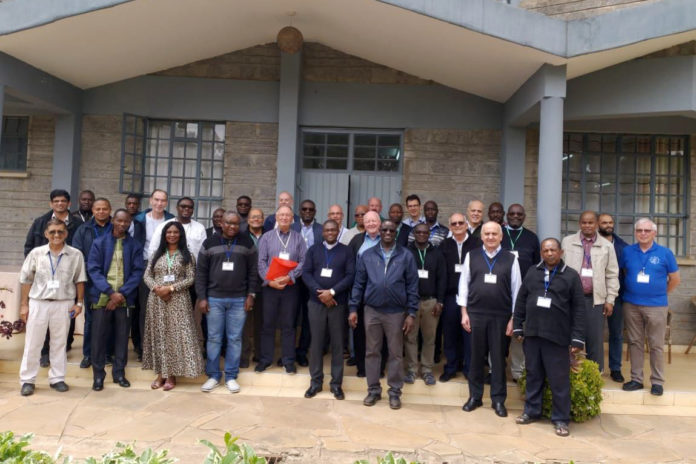 The day began with the Eucharistic celebration with Fr. Zephirn Luyila, the Coordinator of COREAM as the main celebrant. After breakfast, we had our first session at 9.00 am. The session began with a hymn to the Holy Spirit. Fr. Paul Pazhangattu, the Mission Superior of Kenya welcomed the group to Kenya, esp. to Roussel House, Karen where we are staying. 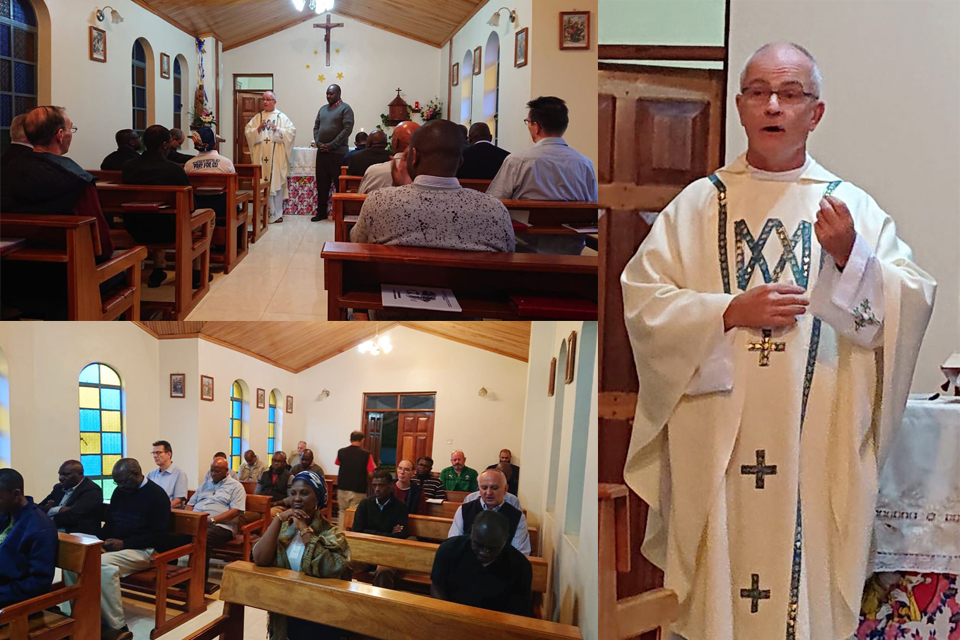 Fr. Michael Brehl gave a brief introduction and Fr. Nicolas Ayouba, the Moderator of the session, requested the participants to introduce themselves. After this, the leaders of various units of KOREAM and the Major Superiors of Mother Provinces gave a brief report of their units- namely, about their Foundation, apostolate, formation and the present statistics of the unit.

Since the members were from different linguistic groups, the presentation was given both in English and French. Fr. Noel Koutre Sottima, the COREAM Council member, made the translation from English to French and French to English.

After the unit reports, Fr. General gave a brief history of the Network. He made an observation that most of the people attending the present Networking meeting were not present at the first Network meeting. The first mission in Africa began 125 years ago in Congo by Belgium province. The first Network meeting was convened by Fr. Tobin and took place in 2006 in Nigeria. Then there were only two Africans who were leaders of their Units. Currently, the situation has changed a lot. Now there are more Africans who are leaders of their units. The dynamics in Africa and in the Mother Provinces have changed a lot. 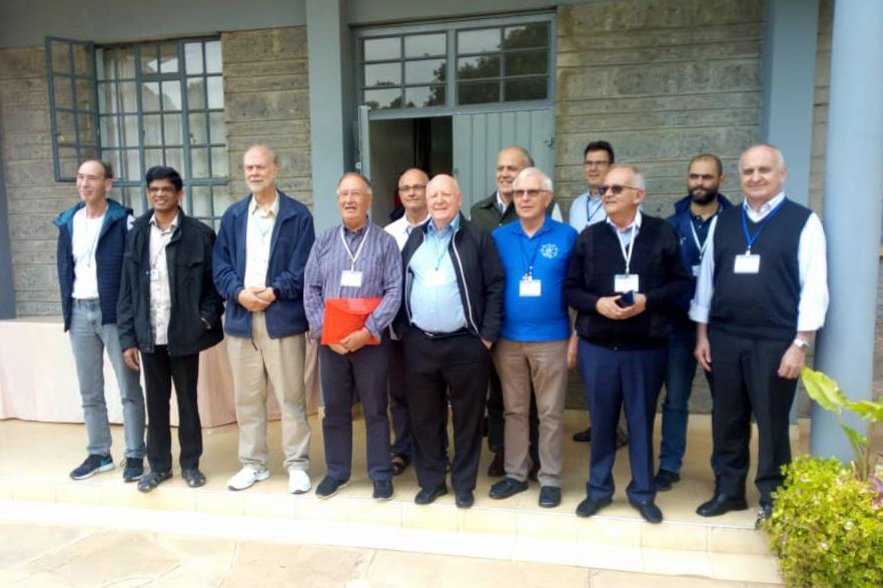 Today the total professed members of our Congregation is 4831. There are 55 bishops and 3707 priests. There are 714 Clerical students. Of this, 345 are Brothers.

In COREAM there are 441 members. Of this, 3 are bishops and 300 are priests. The average age is 43. There are 119 clerical students. We are in a period of transition. The formation is a significant concern in COREAM. Ongoing dialogue with Mother Provinces is needed. Another major concern is financial stability.

In the third session, Fr. Tryvis Moyo presented the Apostolic Plan of COREAM. Based on seven principles drawn by the Commission of Restructuring we have the following priorities:

Another proposal was to make two Provinces: West Africa and Central-Southern Africa with 3 Regions.

The presentation was followed by a Group discussion. We were divided into 6 groups.

3 groups found the second proposal, two provinces as more suitable. One group was divided in their opinion. Another group said that though the first proposal was more logical but more realistic was the second proposal. One group suggested the Federation mode. The meeting ended with evening prayer, followed by dinner and gaudeamus.

The second day of Network Conference began with Fr. Zephirin presenting the situation of the formation and its challenges in Africa and Madagascar. 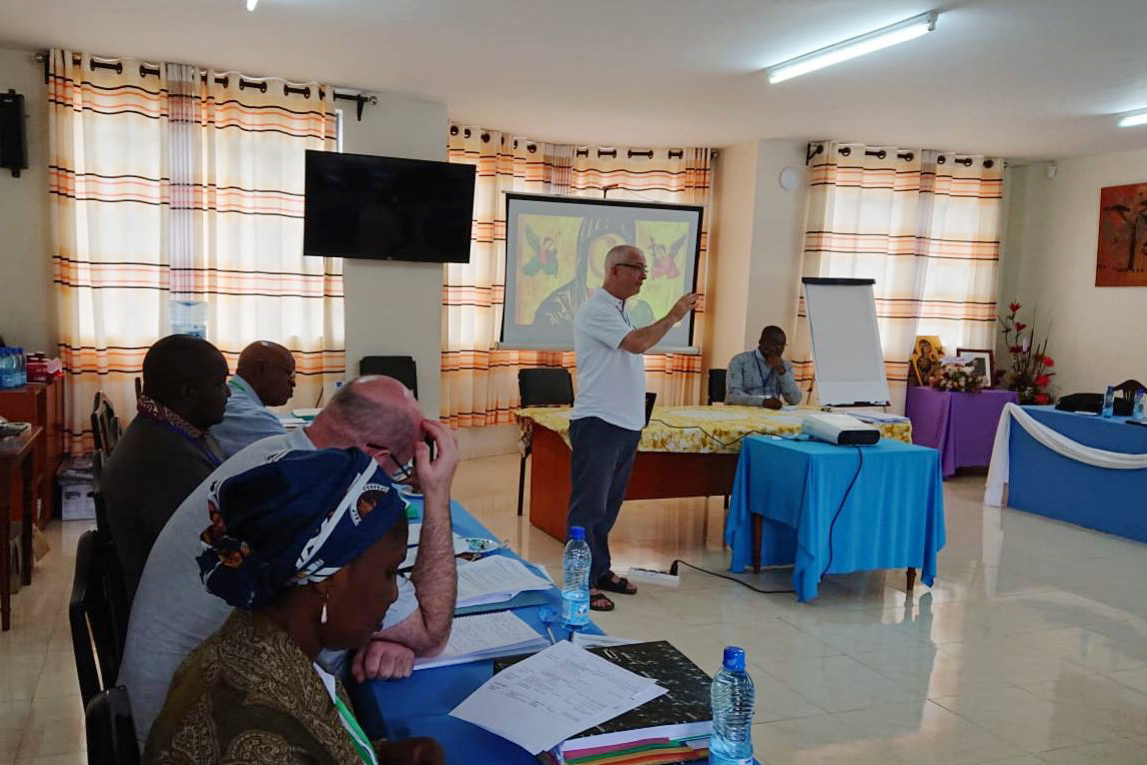 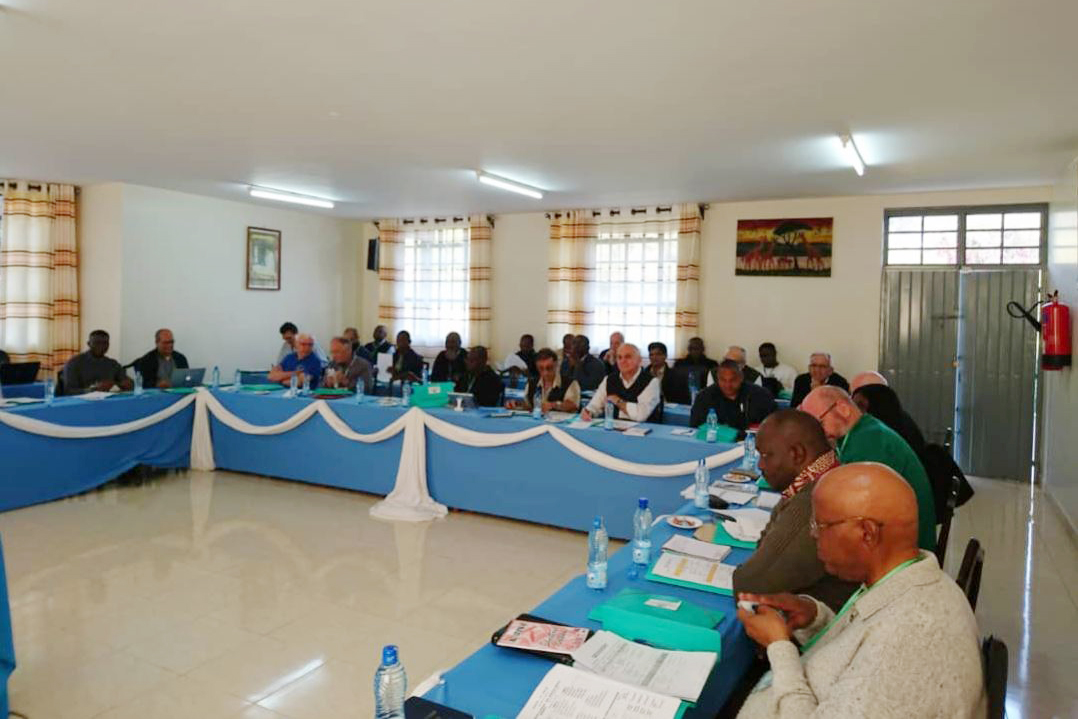 Regarding the relationship between Daughter Units and the Mother Provinces Nicolas expressed sincere gratitude to the mother provinces for the gift of their presence in Africa. We recognize the sacrifice in personnel and financial support. Whatever the result of the reconfiguration maybe we hope that our units in Africa will be supported. We also request for the possibility of giving delegated authority in specific matters to the Regional and Mission Superiors.

Canonically, the assembly does not have the authority to make the decision on their own. We are, therefore, advised that the decision of the assembly be sent to the general government for approval so that they can have binding effect. It is only South Africa, that has autonomy in the African. Decisions about the formation and common mission should be carefully considered in terms of the location, appointment of novice master and socius, which are mainly done by major superiors. Fr. General requested the major superiors to delegate the Mission and Regional superiors to make such decisions. This will help the processes of Apostolic and reconfiguration plan. 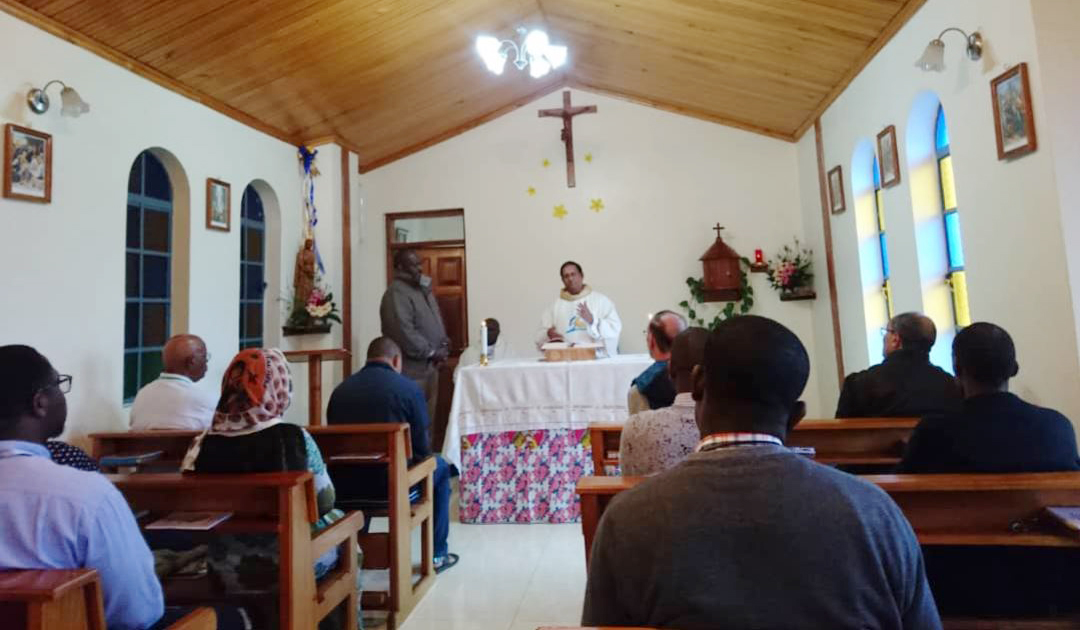 In the next session, there was a presentation by Fr. Gerry regarding Finance for Africa and Madagascar. He gave audited financial statements for RIS to year ending 2018 and other reports up to July 2019. He then gave a history of the financial report on Fund for Africa.

Later there was a group discussion based on: What is your concern or what do you want to say to the mother provinces? The Superiors of Mother Provinces and the superiors of African units met separately.

The Superiors of COREAM felt that this question should be addressed after the assembly. The formation of the provinces is confusing because after every meeting we have new groupings. We do not know the commitment of the mother province. What will be the leadership structure and identity of each unit?

It is important for ongoing dialogue with the mother provinces. We are asking the wisdom of Mother Province in decision-making. We ask mother provinces to help in raising money for projects, to help the formation funding. The group proposed that we meet for the next network meeting in 2021. 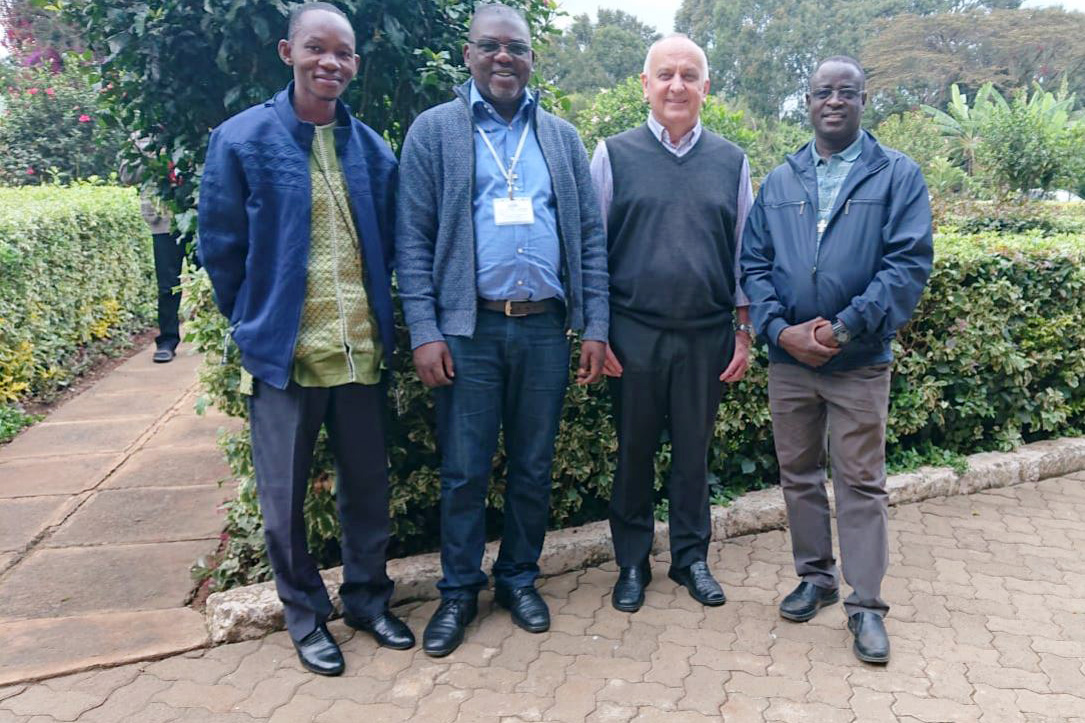 The Superiors of Mother Provinces proposed that the common formation depends on the reconfiguration. The attention on formation should be given authority. We need concrete guidelines for us to move to a new vision. The units should appreciate the effort made by the mother provinces. Fr. Nicholas reminded members that restructuring and reconfiguration are for the mission as well as the formation at all level.

To the question that why only in Southern and Central Africa Regions are mentioned while West Africa has no Regions Fr. General said it was not raised or proposed in the past assembly. The model to be used is not fusion. The commission is proposing for a union. Fr. Pedro added that we are still in the process and we will have a final word in this assembly.

In the last session of the day, Fr. Paul presented some concrete steps worked out by COREAM preparatory Commission.

Fr. Gerard asked if training for leadership is for the future or those who are already in leadership. Fr. Nicholas responded by saying that it is for both in leadership and future leaders. He added that we need to include leadership training in our formation houses.

Fr. Steven proposed that we should start something new as we come up with formation houses.

Fr. Edward asked clarification on the suppression of current units. In his response.

Fr. General said that the inauguration of new units and suppression of present units will take place on the same day.

In conclusion of the Network meeting

Our Networking requested more time for a further and deeper dialogue between the Mother Provinces and Units in COREAM.

Fr. Joannes Roemelt, the Coordinator of the European Conference, acknowledged that we have advanced in sharing ideas and developing our common vision. The work of implementation will start with the approval of the document by the general government. He was so much impressed with the longing to dialogue with one another for the good of the mission. It is a concern that the number of confreres in Europe is decreasing. There are some mother provinces present here that are strong. It is important to work out the documents though it is hard to put them into practice.

Even when there was a fear expressed, that the some of the mother provinces will “disappear”, will stop the cooperation after the Configuration nobody here in the room said he will disappear or stop. We spoke with a smile about mother and grandmother provinces – and it´s true. Some of the provinces are grandmothers because of the age of the confreres. This means that they are not able to continue in the same way the contact, the support. That´s not a question of good or bad will, it´s a fact.

And I was glad to listen to the calendar of the coming events in COREAM and to see that there are training for leadership, training of the bursars etc. There are many resources to support superiors.

When the General Chapter spoke about the process of restructuring it was clear that this is a process of conversion. It´s not just structure, it´s a conversion of our hearts. I am very grateful for the spirit of solidarity and I am convinced it´s growing solidarity between us.

Fr. General then addressed the gathering by appreciating those who came from mother provinces, especially those from Latin America, Europe, and India. He thanked them for being with their brothers in Africa.

The two days passed by very quickly, two days were not sufficient. The consolation is that the dialogue between the mother provinces and units have been taken further. The next meeting will be probably in 2021. We have a lot of opportunities to speak to COREAM.

Thanks to all the Provincials who made it from to the meeting and made special reference to the two from South America Marcelo and Carlos who came all the way and endured English and French. To all the provincials theirs was a presence with the brothers.

Fr General’s parting message was that the commitment on everyone’s part was that we continue to dialogue in the one and a half years till we meet again. With these words, he closed the Nairobi 2019 networking meeting.

The meeting came to an end with final prayers and best wishes.