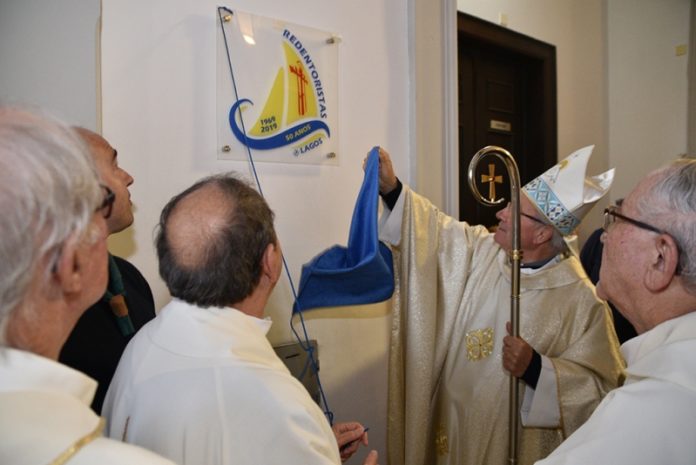 (Lagos, Portugal) The Algarve community of the Congregation of the Most Holy Redeemer, whose members are known as Redemptorist missionaries, celebrated their 50th anniversary in Lagos last Sunday.

During the Eucharist, presided by the bishop of the Algarve – which took place in the church of Santa Maria de Lagos with the presence of several of the 19 Redemptorist fathers who were part of the last half-century of history of that community -, Msgr. Manuel Quintas expressed his recognition for their work in that area of the Algarve diocese. “We are grateful to the Lord for this Congregation that over 50 years has helped this part of the Diocese of the Algarve to be more Church,” he said.

“We join today with the great Redemptorist family to praise the Lord for many gifts in these 50 years of history, life, gift, grace, mission,” he added, “thank you for your presence, smile, charisma, and spirituality, thank you for the way you enrich our diocese and want to continue to enrich it ”.

“With you we want to look at these 50 years with the gratitude of the past, but at the same time live the present with passion, enthusiasm and look to the future with boldness, imbued with the spirit of your founder,” he said in the Eucharist that began with the unveiling of a commemorative plaque.

“We want to continue to see in you, the missionaries that you are and that we still need to be together to be an outgoing missionary Church always in need of pastoral conversion. We want you to continue to help us to be a Church that cultivates the spirituality of listening and proclamation, a Samaritan, merciful and caring Church, a missionary Church that seeks new ways of urban pastoral, a Church with a young face, ”he said, recalling that the Redemptorist congregation has been in Portugal for almost 200 years and that “their life, as of all consecrated persons, is characterized primarily by following Christ” and by “the explicit proclamation of the gospel as the good news of redemption”.

Father António Marinho C.Ss.R., the provincial vicar of the Redemptorist missionaries, and the former provincial superior thanked the Bishop. “We want to thank you for this tribute and at the same time praise the Lord with you for this celebration of the 50th anniversary of the presence of Redemptorist missionaries here in and around Lagos. Of course, the tribute is not just for Redemptorist priests. I want to extend it to you first” said Fr. António Marinho, noting that “the mission continues”. “Let us now look to the future that remains yours and ours, all in communion to serve the mission and the Church. We count on you and you can count on us”, he concluded.

The priest also explained that the feast of the 50th anniversary began on Friday with a “prayer vigil with the Redemptorist saints” in that church and continued on Saturday with the “Walk of the Redeemer”, with catechesis for children and their families on the streets of the city center, attended by over 250 people, and concluded with a moment of conviviality. On Saturday night there was also a concert with the violinist João Pedro Cunha and the Lagos Choir Group.

At the end of the Eucharist, a commemorative plaque was given to each of the representatives of the seven Redemptorist communities in Portugal: Castelo Branco, Damaia, Gaia, Guimarães, Lagos, Lisbon, and Porto.

The Redemptorist community in Algarve is currently composed of four priests: Abilio Almeida, Antonio Ferreira, Silvério Rato and Eugeniusz Fasuga. Father António Ferreira was part, with two other priests, of the founding group of Redemptorist missionaries who came to Algarve in 1969. He spent three years in Lagos and then returned in 2012. Father Abilio Almeida came to Lagos in 1986 and Father Silvério Rato in 2015. This year came Father Eugeniusz Fasuga to replace the Algarve Father José Manuel Pacheco who was also part of the community in Algarve for 16 years.