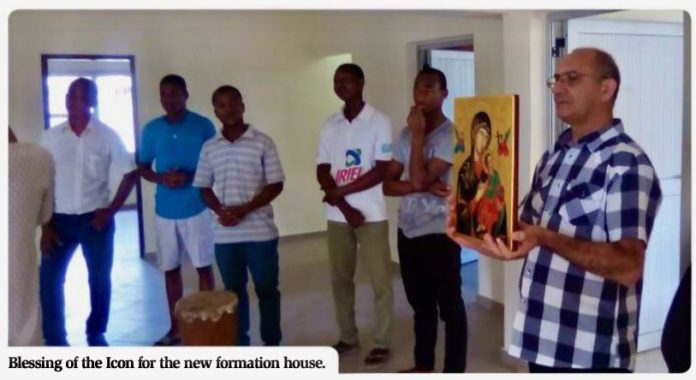 Fr. Dan Baragry C.Ss.R., Superior of the Province of Dublin, Ireland, writes about his recent visit to their newest mission field, Mozambique.

I was privileged to be present last September in Maputo, the capital of Mozambique, at a gathering of the Redemptorists working in that country. I found the meeting inspiring and uplifting and was filled with a sense of hope for the future of this young mission. Nine Redemptorists are currently working in Mozambique, six from Argentina, two from Ireland and one from Brazil in three large and challenging parishes. Though from diverse cultures and backgrounds they are making serious efforts to collaborate more closely together and to strengthen the Redemptorist mission in Mozambique. They are convinced that the future of the mission depends on developing the local church and fostering local vocations to the Redemptorists. As people will remember, Mozambique experienced very serious flooding earlier in the year which impacted the lives of hundreds of thousands of people; while the Redemptorist parishes were not affected by this terrible tragedy we were happy to be able to offer some help to those who were.

The highlight of the visit for me was the blessing of the new Redemptorist formation house on the outskirts of Maputo. This was a common project of the three provinces involved in the mission and is a tangible sign that the Redemptorists are putting down roots in Mozambique which will hopefully produce a harvest that will bring many blessings to the people and church of this troubled country. Currently, there are 11 young men in the formation program, all at the very early stages; however one made his first Profession during the summer, the first Mozambican Redemptorist, and it is hoped that four others will be ready to begin their novitiate in 2020; a great sign of hope for the future.

Our Irish confreres, along with Fr. Eridian from Brazil, continue to minister in Furancungo Parish. Since taking responsibility for this large rural parish in 2012 they have established strong and firm roots with the local people. The building of the new church, thanks to the support and generosity of so many here in Ireland, was a significant achievement and it is now the centre of a vibrant and lively faith community.

This year has seen some changes in the Irish personnel in Furancungo. After four years of dedicated service Fr. Derek Ryan has returned to the home province and is currently curate in St. Joseph’s parish in Dundalk. Fr. Brian Holmes, after four years as Vice-Provincial Bursar in Fortaleza (Brazil), has returned to the mission in Mozambique. Fr. Brian was part of the original group to arrive in Furancungo in 2012 and we wish him well as he settles back into life and ministry there. Fr. John Bermingham continues as Parish Priest.

An important development in the life of Furancungo was the decision earlier this year by the Sisters of Our Lady of Consolation to open a house in the parish. Since then three Mozambique Sisters have taken up residence and are already making their mark. They have been fully intergraded into the parish team and have opened new possibilities for reaching out to the local people, especially to the women.

While still a very young mission, facing huge challenges, there are real signs of optimism as we look to the future. I take the opportunity of thanking all who have supported this mission in Mozambique, either materially or spiritually, over the past years, and confidently hope that we can continue to rely on your generosity and prayers.

Text and picture have been published in Newsletter of the Irish Redemptorists “The Reds”  Vol. 9, No. 2, December 2019.