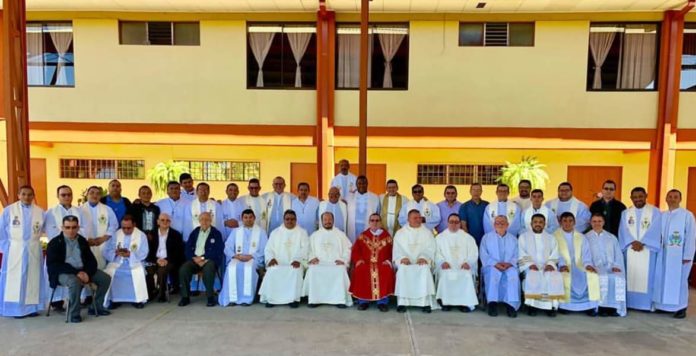 In a context of persecution, Redemptorist Missionaries arrive from Mexico in our Central American countries. Our history in Central America begins in May 1927, when they arrived in Puerto Limon, Costa Rica. From the sister republic of Costa Rica they expanded to Honduras and El Salvador, where they began to work and preach the gift of redemption in Christ through popular missions.

At the beginning of the 20th century, the world lived with expectation the event of Cova da Iria: the apparitions of Our Lady of the Rosary of Fatima, whose devotion reached Central American lands, between the years 1940 and 1950. Would the apparitions of Our Lady be a prelude to the birth of the Congregation of the Most Holy Redeemer in Central America?

The apparitions of Our Lady began on May 13, 1917, and, according to history, it was on that luminous and Marian day of May 13, 1927, when the Redemptorist priests Felix Ruiz de Samaniego and Pedro del Palacio -both Spanish- disembarked from the steamship “Galicia”, in the lively and burning Puerto Limón, Costa Rica. They came under the shadow of the great persecution of Don Francisco Plutarco Elias Campuzano, better known as Plutarco Elias Calles. But driven by the ardour of the Holy Spirit to preach in the Central American isthmus the “plentiful redemption”: to announce with a loud voice the passion, death and resurrection of Our Lord Jesus Christ.

The charism of the Congregation grew and developed little by little, just as a plant grows and develops, fulfilling a life cycle made up of several stages: the germination stage of the seed, it casts its first leaves, its stem, roots and branches; thus, just like a plant, the Redemptorist charism grew and developed in Central America.