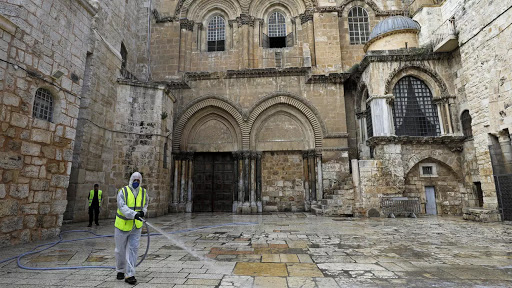 As a seventy-seven- year old I am at high-risk from the Corona virus.  I would like to share some scattered reflections from my pastoral experience as a priest-moral theologian.

Epidemics since antiquity have always spread along trade routes with even more swiftly and dramatically in an age of globalization.  Despite the devastation, humanity has learned to overcome and not to succumb.  When the Black Death stuck in 1349 it took nearly half of Sienna’s population, leaving the walls of its new cathedral standing ‘in mid-air”.  Today, still unfinished, they have been absorbed as part of the cathedral’s history.  Since the Spanish flu just after World War I four great influenza epidemics have swept the world.   By the 1970ies scientists had vaccines for many extremely contagious diseases and predicted that epidemics might be consigned to the past.  They were quickly disillusioned by the arrival of AIDS, Ebola, Saas and now the Corona virus.  In fact, specialists kept warning that a tremendous outbreak was not just possible but highly likely and that we were medically and psychologically unprepared.

A remarkable fact emerged from the Ebola epidemic in North Africa in the 1990ies.  Cultural anthropologists discovered that a tribe had escaped its effects even though assailed on all sides. The tribe controlled the contagion although it was constantly in contact with it.  There was no magic solution.  By changing their behaviour the rate of infection remained below the threshold where it could spread to threaten the tribe.  Ever human group displays this ancient instinct for self-preservation, for survival and resilience in the face of deadly fear. We come through by depending on each other.   Scientific knowledge without the wisdom to work together becomes self-defeating if people react for themselves alone.

The first thing to learn is the necessity of changing behaviour, not just one piece of behaviour, but our life-style so as to survive in dependence on others.  We do not wait for others to adjust to us: we are called to change our behaviour patterns for the common good.

On the ABC 7 PM News of Monday March 30th, Boris Johnston, the British Prime Minister, having tested positive to the virus, declared from self-isolation at home in Downing Street, that all this was the proof that “There is society” (his emphasis).  In many ways, the experience of the Corona virus might provide a sane balance to the individualism that blights our society.   By proving that we do not live for ourselves alone we are brought to help each other, discovering resources we never thought we had.  How many children will get to know their fathers because he had to stay at home during this period?  How many marriages will improve because husband and wife face the crisis together?  Even though physically separated, social relationships are more necessary than ever before.   This experience of living by and in and for the community teaches us to appreciate the value of direct face to face relationships and contact, the simple things of life.

Because “there is society” we as a community are prepared to make great sacrifices to preserve and indeed gain other benefits.  That is why we observe the measures introduced by governments and cooperate with them.  That is the way to deal with the double crisis in health and in the economy.  For instance, we need the shut-down and spacial distancing rules in order to break the virus’s chain of transmission between persons.    Governments, on their part, are there to protect the health and welfare of all, without preference for persons.  The disease can strike anybody without discriminating between politics, race or religion.  We are joined in a common fate.  In the distribution of scarce resources, for example, ventilators in ICU units in hospitals, the government should show no privilege to the wealthy over the poor, the city over the country, or do anything that puts aboriginal or vulnerable sections of society at risk.  The government may have to isolate such communities for their protection.

From the experience in other countries, particularly Italy and Spain, the medical profession faces the acutest problems regarding personnel and resources.  At times there may not be enough hospitals, hospital beds, specialist doctors and nursing staff or Intensive Care Units to go around as we are accustomed. Necessity imposes horrible choices.  Anesthetists are usually the ones most put to the test here when they have to choose which patients to treat and who has a better chance of recovering.  Cases of extreme triage are the worst type of moral dilemma and we are grateful that the medical profession has had the courage to bear this burden.

All of these principles apply equally to the Church.  Speaking to priests as ministers of the Gospel, Pope Francis charged them to go out and be in the midst of the people at this time.  What he said in Italian is important, “Di stare con il popolo”.  It may seem finichy.  He did not say “gente” as he might have.  What is the difference?  “Gente” means something like my people, my group, my community, “my mob”.  “Popolo”, on the other hand, means the whole society, the people of all classes, conditions and creeds.  The Pope is urging priest to think in this wider horizon.  He is referring to the same reality as Boris Johnston but from the perspective of faith.   As we know from his South American “teologìa del pueblo” (theology of the people) he is thinking of the People of God and how it is threatened by this virus.

To be continued next week…