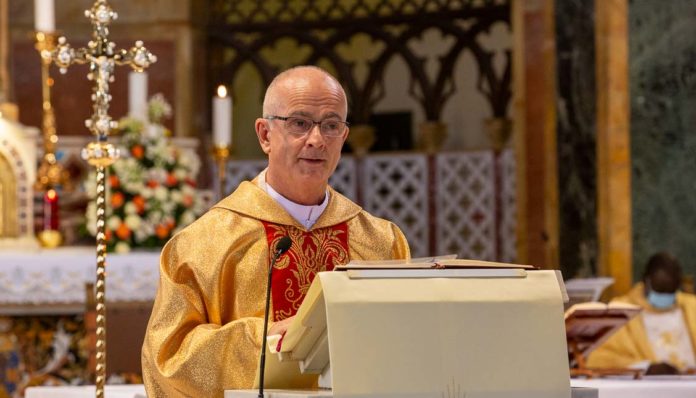 (Rome, Italy) Christ the Redeemer has accompanied us and continues to accompany us in this time of pandemic. We celebrate the closeness of God present among us in the person of Jesus, our brother and our Redeemer – Fr. Michael Brehl, Superior General of the Congregation of the Most Holy Redeemer, recalled in his homily. Fr. General presided at a solemn Mass celebrated in the Saint Alphonsus Church in Rome on July 19, marking the patron feast of the Congregation of the Redemptorists, which is celebrated every year on the third Sunday of July.

Fr. Brehl presented the origins of the Feast of the Most Holy Redeemer, which began to be celebrated in Venice in 1577, to commemorate the end of the plague that had been ravaging the population of the city for several months.

In the current situation in which the effects of the pandemic are affecting many Redemptorist communities around the world and the people they serve, we again recognise the presence and closeness of the Saviour, who does not leave us alone to suffer.

Fr. General continued: This mystery of the closeness of the Redeemer, even in these most difficult times like this pandemic, is a mystery of love. Meditating on this mystery, the Pope, Saint John Paul II wrote:

Meditation on the mystery of God’s love opens a new perspective and leads to concrete decisions. Fr. Brehl explained it in the following way:

The closeness of the Redeemer as our brother teaches us how we can become more human, truly redeemed human beings like him: to come closer to the abandoned and the poor to become brothers and sisters of all human beings! This is a great challenge for us with ‘social distance, physical distance’.

The liturgical celebration of the Solemnity of Christ the Redeemer in Rome was attended by members of the General Government, confreres working at the General Curia and members of the community of Saint Alphonsus, as well as many non-European students from the Alphonsian Academy who remain in Rome this year during the summer holidays due to a pandemic. Together with the Redemptorists, the faithful were present at the Eucharist, who usually attend Sunday Mass in our church.