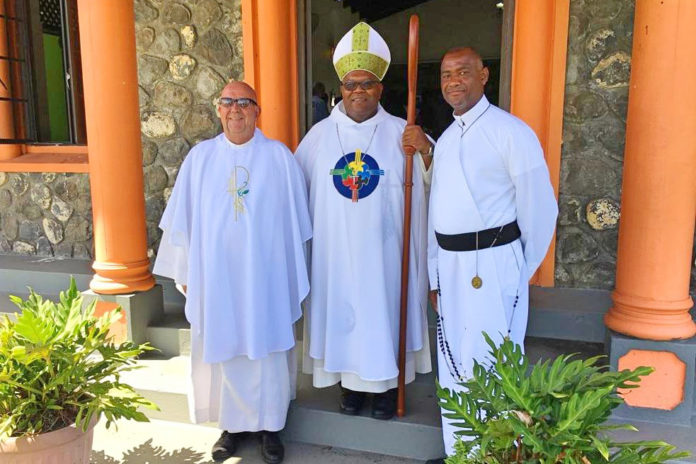 Redemptorists follow a basic rhythm of life motivated by Constitutions and Statues. There are principles and directives that also guide the overall mission of the Congregation, including the restructuring of apostolic commitments. Restructuring for mission, as it is called, focuses on fidelity to the charism of our Redemptorist founder, Saint Alphonsus Liguori. He was a man of great prayer and pastoral zeal, particularly among persons who are poor and abandoned.

In that spirit, the Provincial Council, during their current term, decided to accept a new commitment in the Antilles Region of the Caribbean. Already present in the island-nations of Saint Lucia and Dominica, this decision would take confreres further south to Saint Vincent and the Grenadines (SVG). The move, announced in May of 2019, was effective on November 1 of that same year. 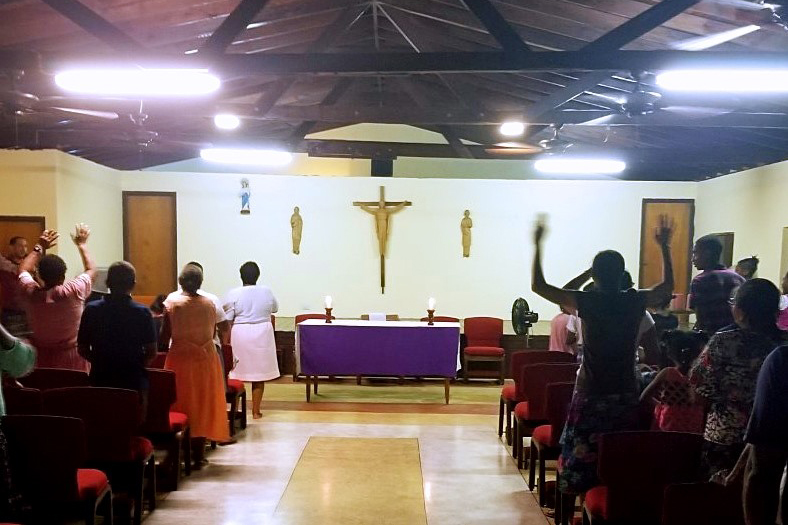 Bishop Gerard County, C.S.Sp. (Diocese of Kingstown, SVG) eagerly invited the Province to consider a mission in the Diocese over a year before the decision was made. A discernment process followed, which included a pastoral visit. Father Paul Borowski, Provincial Superior, and Father Kevin Murray, then-Superior of the mission in Saint Lucia, visited SVG to view first-hand the area Bishop County envisioned for the Redemptorists.

The “Vincy” tour centered on the parish of Saint Benedict, located on the north Windward side of the country. Three chapel communities are served by the parish: Georgetown, Belle Vue and Sandy Bay. This last is home to a large indigenous population known as Garifuna. Sandy Bay is also home to the Garifuna Bakery, an initiative of the local Church serving the greater populace and empowering residents through employment. 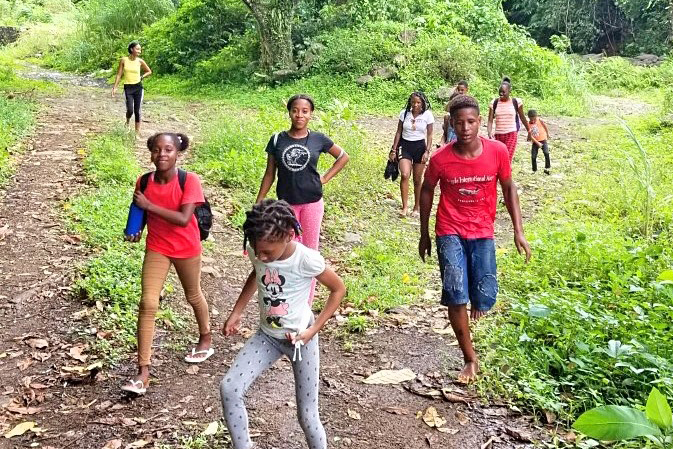 The visit proved to be very enlightening and inspiring. Both men left with a sense of great potential for a Redemptorist presence in the parish and well beyond the communities presently served. They sensed a need for evangelization stretching far and wide to many village communities. Outreach, they felt, could include territory all the way to the northern tip of the island into the community of Fancy, where the neighboring Catholic (and Redemptorist) parish is in Vieux Fort, Saint Lucia!

Throughout the year that passed between the initial visit and the acceptance of the commitment, the prayerful desire and strong support of Bishop County for a Redemptorist presence was clearly evident. Also, of note is the encouragement felt by a lay missionary from Ireland, Fergal Redmond. He accompanied the Bishop on the visit. He, too, offered his heartfelt prayers and supplications that Redemptorists take up shop, so to speak, in the Diocese. 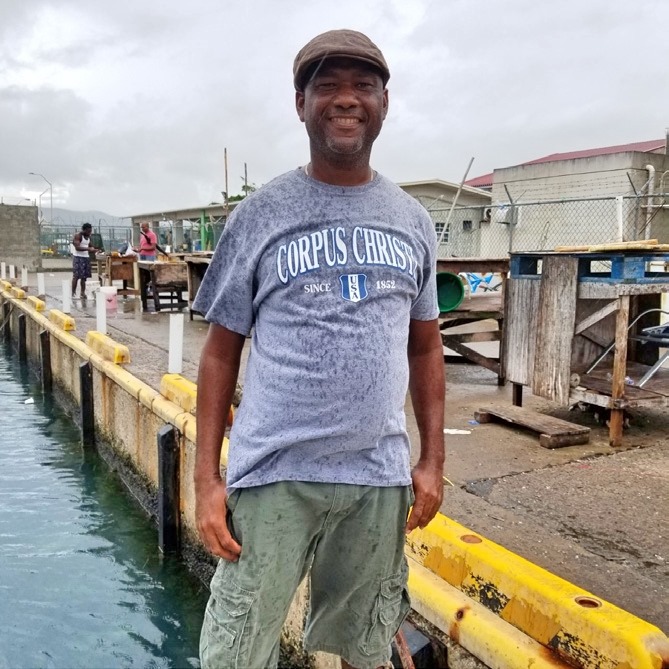 The answer to those prayers came with the arrival of Father Kevin Murray, C.Ss.R. and Brother Gerard St. Hilaire, C.Ss.R. on October 31. They traveled by fishing boat from Saint Lucia, where they previously served in Vieux Fort and surrounding communities. Making the voyage with them was faithful parishioner, Lambert Charlemagne who manages Church facilities for the parish in Saint Lucia. On hand to welcome them at the dock were Bishop County and then Deacon-elect (now ordained priest of the Diocese) Collin Jackson. The reunion was indeed warm and gracious and thus began, over a nice late lunch by the sea, the Redemptorist presence in the Diocese of Kingstown, SVG.

Having cleared customs and immigration before the meal – giving an account of themselves and belongings, with a subtle sense that one day more sublime gates await the same – the missionaries were off on the back of a truck. Gracious hosts followed behind on the long and winding road to Georgetown. Once arriving there, the relatively small quarters of the Presbytery (Rectory) would be home for the next month.

The first Sunday in the parish, November 3, was an eventful one. Parishioners from all chapel communities were present in the church of Saint Joseph, Belle Vue for one combined, festive Mass. Bishop County was on hand to celebrate the Mass and install Father Kevin as Parish Priest (local parlance for Pastor), and commission Brother Gerard. A joyful reception followed the Mass with greetings from many new faces, including special-needs children of Saint Benedict’s Home and Day Nursery – a ministry directed by Carmelite Sisters within the parish.

The former site of the Children’s Home, owned by the Diocese of Kingstown, has been completely refurbished as the residence of the Redemptorist community. Brother Gerard and Father Kevin moved into Liguori House, as it is now known, on the first of December. The move was just in time to welcome Fathers Paul Borowski, C.Ss.R. and Ako Walker, C.Ss.R. as initial guests. They were present in the parish for the formal inauguration of the Redemptorist mission in SVG on December 8, 2019. Noteworthy is the fact that the bed for Father Paul’s room was not quite ready for his visit. Nonetheless, the Provincial Superior humbly took to the floor on a simple mattress – reminiscent of his many mission nights on service trips with young adults.

The days preceding the formal launch of the mission were celebrated with a Triduum in honor of Our Mother of Perpetual Help, conducted by Father Ako. The three nights were a blessed time of prayer, preaching and praise with a night held in each chapel community. A good introduction to Alphonsian spirituality and the Redemptorist charism was served up in fine fashion. The day marking her Immaculate Conception was certainly an appropriate way to launch the mission.

One Parish Mass was celebrated that Sunday in the Sandy Bay chapel: Our Lady Star of the Sea. Father Paul was the main celebrant and preached a moving homily with an Advent theme. Linking the new mission to the ministry of John the Baptist, he spoke of living and proclaiming the Word of God without compromise. Citing the example of Mary, he introduced the Redemptorists as a Congregation called to do as she did: bring the copious love of Jesus into the world!

After Mass, Liguori House was open to receive local guests. Bishop County joined the festivities in the afternoon, graciously leading those present in prayer as he blessed Liguori House as the newest foundation in the Province. A wonderful BBQ, organized by Brother Gerard, topped off a great day in celebration of new life. An abundance of food and drink left no one hungry – except for further expressions of the Redemptorist charism! Since the inauguration, many good things have been happening as the charism begins to take root. A youth group was formed with recently confirmed parishioners, who have since attracted other members.

Activities thus far have included regular meetings, prayer, participation in liturgical ministries and packaging of food parcels for home-bound parishioners. The young people recently organized an outdoor event that included a moderate hike (for them!) to a local waterfall, swimming in cool-river waters, and a nice lunch prepared by adults present.

Other initiatives involve a food pantry for needy and home-bound parishioners, evangelical outreach to the community of Fancy, and the initiation of, in collaboration with the Parish Council, a Parish Finance/ Fundraising committee. The Garifuna Bakery is also receiving much-needed attention in terms of restructuring and expansion as a mission of the local Church.

The Bakery has a long and faithful history serving the Sandy Bay area and beyond. A follow-up article will tell the story in more detail. For the present time, suffice it to say that the decision to expand the Redemptorist footprint to this territory has already borne much fruit, with great potential on the vast horizon.