An example of longevity, wisdom, perseverance in one’s own vocation, and inspiration for Christian life, Father José Luciano Jacques Penido, C.Ss.R., is considered one of the world’s oldest Redemptorists, with 98 years of life, completed on October 18, 2020. Lucidity, prudence, generosity, obstinacy, and total self-giving to God are characteristics present in his path.

Born in Belo Vale (MG), son of Mr. Henrique Marques da Silveira Penido and Mrs. Maria José Jacques Penido, still a child, the religious was already thinking of becoming a priest. His mother’s prayers and the words of his godmother, who one day said he would be a priest, awakened his will to serve God and the Church. And so he entered the Redemptorist Juniorate in Congonhas (MG), in 1934, at the age of 12. He chose the Congregation of the Most Holy Redeemer under the influence of Father Athanasius Geerlings, C.S.R., who, visiting his parents, said that one day he would be a Redemptorist Missionary!

In his almost 80 years as a Redemptorist in the Province of Rio (Brazil), the priest highlights three important moments: his entrance into the Juniorate in Congonhas, 86 years ago; his vows in Juiz de Fora (MG), on February 2, 1942; and his priestly ordination in Belo Horizonte (MG), on July 20, 1947.

Father Penido passed through various Redemptorist communities and saw the Province of RJ-MG-ES grow and bear much fruit. Among the many stories and curiosities, he remembers a missionary trip where there was a terrible accident with a bus. “I came down to see the crash and 5 meters ahead, by the side of the road, I took a person’s confession and acquitted him,” he reported.

In the Province of Rio, he held various positions, as teacher and juniorate socius, and provincial superior, from 1962 to 1967. Since 2011 he has resided in the Redemptorist Community of Rio de Janeiro, working in St. Alphonsus Parish. He celebrates Mass twice a week and is regarded by the parishioners as a great heart priest, very cautious, lucid, and solicitous with people.

Father Penido, who is also a journalist who graduated from the Pro Deo International University, states that evangelization through the media in today’s time is the most efficient means of announcing the Word of God. Asked what it is like to be a Redemptorist Missionary in today’s world, the priest does not hesitate in his answer: “It is to live the Gospel today and proclaim Christ through the spoken, written, proclaimed, projected word, but above all, through personal witness. 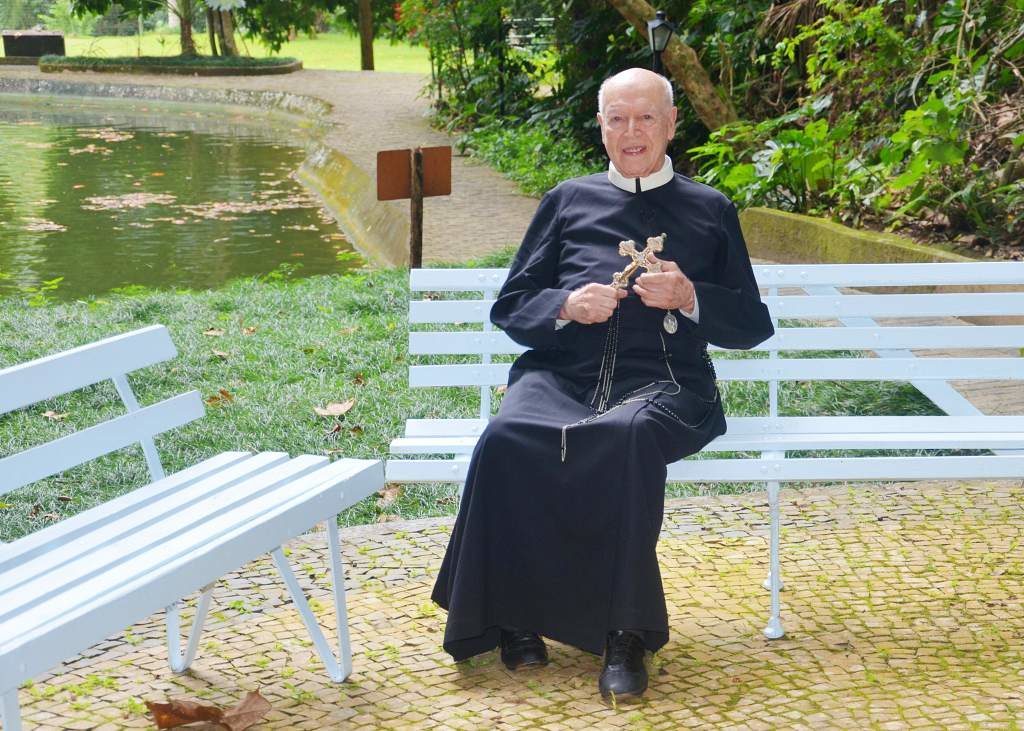 For the future, Father Penido looks forward with good eyes and hope to the process of restructuring and reconfiguration through which the Redemptorist Congregation is going throughout the world because of its mission. “Initially, there will be certain difficulties due to the customs proper to each Province, but the final result will be beneficial to all,” said the priest.

With all his experience as a religious, his example of life, vocational constancy, and missionary ardor, the almost centennial Redemptorist leaves us a special message: “Dear young people, try to be generous to the Word of God and your vocation! To the confreres, I say: let us live the Redemptorist life each day as if it were the first, the last, and the only one of our lives.

Brenda Melo,
A journalist from the Province of Rio